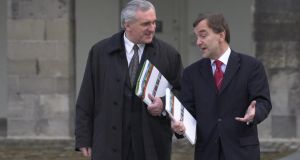 Former taoiseach Bertie Ahern and Martin Cullen, then minister for the environment and local government, at the launch of the National Spatial Strategy in 2002. Photograph: Brenda Fitzsimons

Abortion is getting all the attention but decisions which will have an enormous long-term impact on the country will be made in the coming days by the Government.

The Cabinet meets next Monday for a special session to discuss the forthcoming national planning framework and the 10-year capital investment plan. This is the framework and the blueprint for the development of our national infrastructure over the next decade and beyond.

It comes at a time when economic recovery means this administration – and probably the next two, all going well– will have many billions of euro to spend. It is hard to think of something more important to get right.

Cast your mind to the early 2000s, when a similar opportunity presented itself to Bertie Ahern’s second government. One episode from that extraordinary era perhaps sums it up best.

In the days before then minister for finance Charlie McCreevy announced his decentralisation package in the Budget at the end of 2003, McCreevy and two of his senior officials spent hours phoning ministers to agree the divvy-up.

McCreevy was paranoid that his plan would leak, so he left the final details until the last few days, and agreed them only with cabinet ministers. Most of the civil service was kept entirely out of the loop.

Martin Cullen, the minister for the environment, was in Stockholm. McCreevy rang him while he was in the airport, on a bad line. McCreevy seemed to be whispering. Cullen could barely hear him, and shouted back at him. Cullen didn’t know what he was talking about at first.

“What?” Cullen shouted back.

“The big what?” Cullen roared.

“D! D!” McCreevy shouted back. “De-f**king-centralisation! What do you want and where do you want it?”

In all, 53 Government offices and agencies were to be sent out of Dublin to towns all over Ireland. Ministers and TDs returned to their constituencies in triumph. Tom Parlon, then a Progressive Democrat junior minister and now the voice of the construction industry, erected banners on the side of the road in his constituency: “Civil Servants – Welcome to Parlon Country.”

The whole thing was an expensive disaster, of course. Not because moving Government offices out of Dublin is a bad idea (in many cases, it’s a good idea) but because it was badly planned and dominated by political imperatives.

But it served its purpose in a way: it gave McCreevy a big bang for his budget. A temporary economic slowdown in the early 2000s had deprived him of the revenues for the sort of swashbuckling, tax-cutting, Champagne Charlie budgets he loved. More importantly, it sent a message to voters all over the country: Fianna Fáil will bring home the bacon. Never mind that it was the antithesis of good planning for the long-term future. It was good politics, for a while, anyway.

It is a fact of political life: a lot of voters love this kind of stuff. Mr Ahern and his heroes, let us not forget, were re-elected at the subsequent general election for a third term.

I once asked a veteran of Ahern’s administrations – who himself had secured a few plum decentralisations for his own constituency – about this stuff.

“Isn’t this what people have always expected the leaders of their communities to do?” he asked.

He viewed himself as a sort of mediaeval chieftain, securing favours and bounty from the king for his vassals. He knew, of course, that if he didn’t secure tangible benefits, then his vassals might find themselves another chieftain who would.

This is hardwired into the Irish political psyche: hail the man who “delivers”.

Any coherent plan must choose a small number of centres to prioritise. Otherwise it’s worthless

Don’t get me wrong: it’s unreasonable to expect that politicians don’t try to look after their constituencies. Politicians everywhere do it. But our problem in Ireland is that it has constituted too much of what they do, even at cabinet level.

We should realise politicians will be conscious of their local responsibilities but expect them to insist that the national interest takes priority. But that often hasn’t been the case in Ireland.

One of the failures of decentralisation, even on its own terms, was that it completely ignored the Ahern Government’s National Spatial Strategy, published a year earlier. Its idea was to select priority locations for investment and development.

The forthcoming National Planning Framework will prioritise development in the existing cities – Cork, Galway, Waterford, Limerick. Fierce pressure is being applied to add Sligo to the list.

But ministers from other parts of the country are jumping up and down about being ignored, and making strenuous efforts to have other urban centres included. Their cause was aided last week when a group of opposition TDs, having seen an early draft of the plan, warned that the plan would “ignore rural Ireland”.

But any coherent plan must choose a small number of centres where growth and development will be prioritised. Otherwise it’s worthless.

To cite an example, it must choose to channel investment and development funding to Waterford – not to Waterford and Wexford and Carlow and Kilkenny at the same time.

If the plan to be announced shortly doesn’t have some people jumping up and down claiming that they were ignored, then you’ll know there’s something wrong with it.

To govern, after all, is to choose. And we have been ducking choices for long enough.