Rite and Reason: Moral theologian explored idea of being spiritual but not religious 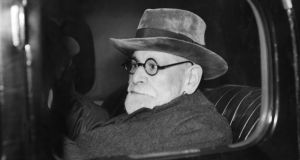 Sigmund Freud: Vincent MacNamara was associated with Eckhart House which offered courses in psycho-synthesis, a methodology which aimed to provide a spiritual overlay to the work of Freud.

“One of the attractions of psychotherapy for people is that it provides a space where they feel listened to and accepted. They are allowed to tell their story – what they think and feel and fear and want. It takes them where they are, however they got there. That is comforting.

“It feels real, actual. One might contrast this with much that has been offered in religious and moral teaching. That has proposed rather what they ought to think and feel and hope for. Which seems remote and authoritarian and unreal.”

Thus did the moral theologian Vincent MacNamara, who died last July, begin his New Life for Old. This is a dwarf-sized book, expressive perhaps of the author’s characteristic modesty, but also of his recognition that those who might benefit from its contents are invariably time-poor.

He sought to reach beyond the closed circuit of theologians, to a general readership of those anxious to pursue their questions.

Vincent had done the rounds of academic and religious life, having taught in a variety of institutions and served as vicar-general of his Kiltegan community. It is said that as a young lecturer at Maynooth in the 1970s his liberal leanings cost him advancement to a chair that became vacant, despite protests from staff and students. He left to pursue a further doctorate at Oxford.

In his later time, he had become absorbed by the relationship between psychology and spirituality and the commonly expressed “I am spiritual but not religious” stance.

He became associated with Eckhart House in Dublin, founded by Dominican Micheál O’Regan and later led by Sr Joan O’Donovan. Eckhart House offered courses in psycho-synthesis, a methodology for personal integration developed by Roberto Assagioli who aimed to provide a spiritual overlay to the work of Sigmund Freud.

The little book just referred to is focused on desire, everyday wants and strivings, but also a deeper kind of desiring that its author suggested could bring us into the domain of “soul”. He saw a possibility for religious faith and morality to be seen as further reaches of desiring and for “the transformation of desire which we might hope for through mindfulness or self-presence”.

Vincent MacNamara emphasised spiritual practice, both sitting in stillness for a defined period of the day and the adoption of a meditative style of life more generally. The fact that Zen Buddhism is largely agnostic about the idea of God did not limit his interest in that tradition, and the pathway it offered for spiritual growth.

He noted  Buddhists considered that mindfulness had in the West been 'torn from its roots', when stripped of spiritual content and utilised simply to relieve stress or anxiety

He noted that Buddhists considered that mindfulness had in the West been “torn from its roots”, when stripped of spiritual content and utilised simply to relieve stress or anxiety, promote wellbeing or improve performance.

He subjected his own frail form to extended periods of meditation in uncomfortable postures in five-day silent retreats.

Although a brilliant scholar, who right to the end of his life devoured the most demanding modern texts on topics such as the nature of consciousness and the science versus religion debate, he saw a danger of becoming captive to intellectual conceits.

He pondered at length an extravagant question posed by a Zen master: “Can you live without your concepts?” For those drawn to lengthy discussion on the purposes of meditation, he liked to quote an irascible answer from another such teacher: “For God’s sake, just do it.”

In his work as a moral theologian, however, MacNamara subjected the hard questions to rigorous analysis.

He was wary of moral absolutes, always ready to recognise and explore complexity.

He was wary of moral absolutes, always ready to recognise and explore complexity. As editor, with his friend Enda McDonagh, of a compendium of essays on Sex, Marriage and the Family, he wrote an introduction in which he asked, concerning sexuality, “Where would you begin if you wished to engage with it theologically? . . . Anthropology, sociology, psychology, philosophy, medicine? Or all of them?”

Generally, in a meeting or over the supper table, Vincent MacNamara didn’t volunteer an opinion unless asked for one. But those fortunate to know him appreciated the astonishing range and depth of his knowledge, going well beyond theology, philosophy and psychology to include literature, drama, music and gardening.

Where major controversies arose, he gave respectful attention to competing viewpoints and mused about possible theological support for fresh currents of public opinion.

Church authorities might have benefited in recent times if they had sought his counsel before formulating positions on highly charged social issues that gained little purchase with their adherents.

Yet those of us who blithely self-classify as emancipated moderns might ponder the report, offered at Vincent’s funeral Mass, that in his final hours this outstanding thinker and writer confided that he would look only for “forgiveness, compassion and mercy”.

Fergus Armstrong is a mediator with ONE Resolve