Enemy of working man is not Donald Trump, it is the professional aristocracy 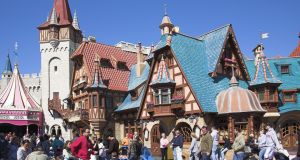 Disney World is the place blue-collar America comes to on holiday. An “all-in” week here is part of the American dream. The people who make the pilgrimage are the people who voted for Donald Trump.

One of the most beautiful sounds is the laughter and giggling of babies. There is something, possibly to do with evolution, in their uncontrollable joy that affects us profoundly. Even the hardest curmudgeon tends to be disarmed by a laughing infant.

He split a group of babies into two groups. The first group was put into cots, face up . He hung some translucent animals just above the babies’ heads. The babies couldn’t make out the animals clearly.

But if these babies moved their heads to their right, they activated a sensor that would trigger the animals to light up brightly. The animals would dance for a few seconds and then stop.

It became impossible to stop them. The babies watched the animals, giggled, let the light go off, waited a second in the dark and then moved to set off the animals again. And again and again.

Watson placed another group of babies in identical cribs. However, these were “free rider” babies. They also had toys above them, but they had no control over when the lights came on. But when the “controller” babies turned over and forced the lights to go on, both sets of babies saw the brightly lit, dancing animals.

Initially both sets of babies giggled uncontrollably at the sight of dancing animals – but over time, the babies who didn’t control the toy animals got bored.

They were in control, giving orders.

Watson concluded that the reason for the divergent reactions from the two sets of babies is control. It is not the bright dancing animal that brings joy to the babies; having control over the animals is the source of delight.

When you take that control away from humans, we become agitated, uneasy and unsure of ourselves.

In economics, these basic psychological observations are absolutely crucial to understanding how the economy, society and indeed politics work, yet far too often they are ignored.

I’m writing this to you from America but not just any America. I’m in an “all-you-can-eat” hotel in the bizarre planet that is Disney World, Orlando.

Disney World isn’t just any America. This is the place that blue-collar America comes on holiday. An “all-in” week here is part of the American dream. The people who make the pilgrimage are the people who voted for Donald Trump.

Are these the Deplorables?

He wants to be like the Trump they saw on TV who said, 'You’re fired'

Despite that fact that they’ve saved and scrimped maybe for years to come here on a “once in a lifetime” family holiday, they stand with Trump.

Despite the fact that they live on the other side of the tracks from the billionaires who surround Trump, they are his people. Despite the fact that the tax-cutting budget unveiled by Trump last month will outrageously favour the billionaire class and penalise the “Disney World” class, they support him and his divisive “the outrageously rich, get richer quicker” policies.

How can we make sense of this? Let’s go back to this issue of control: who has it and who doesn’t?

We love to be in control, but in truth we rarely are. The average worker’s daily reality is the opposite.

Typically he is taking orders from someone else, and is not only not in control, but under the thumb.

The average guy votes for the guy who looks like the boss because deep down that’s who he wants to be, not for the money alone, but for the sense of personal sovereignty.

He respects the person who has made it on their own, and he hates the smug know-it-all who tells him what to think

Someone once observed that Donald Trump is what poor people think rich people look like. It is a cruel but brilliant observation.

The working man doesn’t despise the rich guy who has made it on his own. That guy has earned the right to give orders. He despises the hyper-educated professional who has made it because of conferred credentials. He respects the person who has made it on their own, and he hates the smug know-it-all who tells him what to think or how to think, whose status is conferred by a degree or a title.

What he despises most of all is that he has no real control, but they appear to have control without having risked anything. The enemy of the working man isn’t Donald Trump but the professional, quasi-clerical aristocracy, who look down their noses at him for holidaying in Disney World, while they hang out in a similar la la-lands like Martha’s Vineyard – Disney World for people with degrees.

In his book, they haven’t earned it, yet they make the rules. This is why he hates the elite but not the rich, and in his mind they are very different species.

Over the years, blue-collar Americans have lost not just status but that one strength that we all crave, control. At some stage they used to give orders, maybe in the community, in the club, at home; now they take orders. So they vote for the guy who gives orders because that’s the freedom they want.

This is why, irrespective of what the professional class says, Trump remains their man. The more Vanity Fair hates him, the more Disney World loves him.

The key to understanding this is deep within human nature, and it’s evident from birth. It’s about who gives orders and who is in control.

1 Coronavirus: 50 new cases as Glynn says phase four delay disappointing for many
2 Gardaí surrender 13 people to Polish police
3 Fresh investigation into the murder of Michaela McAreavey in Mauritius
4 ‘I wandered around Dublin wondering: Is this what they call a capital city?’
5 Funeral of John Hume hears peacemaker ‘gave dignity and life to so many people’
Real news has value SUBSCRIBE