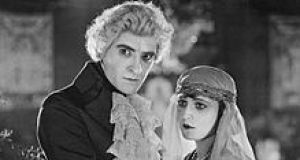 One of the more astounding revelations of reading The Count of Monte Cristo – and I seem to be the first literary critic ever to have noticed this – is that it contains a basic outline of the 1991 Hollywood Movie, Thelma and Louise.  There is even a character named Louise, although in the Alexandre Dumas version, the other half of the tearaway female couple is a Eugénie.

Even more remarkable for a book published in 1844, the heroines of this subplot are implicitly gay, something 1990s Hollywood wouldn’t have dared. The character of Eugénie, an artist of independent mind, has already made clear her romantic indifference to all men, even as she agrees to marry one in a wedding motivated by the financial cynicism of groom and father alike. But when that falls through, she and her buddy set out on an impromptu road trip. And this is where Dumas starts dropping heavy hints.

To overcome the challenges involved in women travelling then, for example, we learn that the pair have secured a joint passport in the identity of a man named “Leon, travelling with his sister”. Eugénie backs this story up by cutting her long hair to the point where “it had now quite a masculine appearance”, although Louise agrees it makes her even “handsomer”.

Then they share a long meaningful glance, followed by this exchange. Eugenie: “What are you looking at?” Louise: “I am looking at you; […] you are adorable like that! One would almost say you were carrying me off.” Eugénie: “And they would be right, par Dieu!”

That last expression (“by God!”) passed for bad language in 1844, hence Louise’s shocked response: “Oh! I think you swore, Eugénie.” For a woman to use such a term may have been one of Dumas’s stronger hints about where this was all going. Some of the original readers must have needed smelling salts.

I suppose I should have issued a plot spoiler alert before divulging any of that.  But as well as being 176 years old, The Count of Monte Cristo is 1,200 pages long. If you haven’t read it by now, you probably weren’t going to.

It’s a pleasing coincidence that I should have reached the aforementioned section of the book (page 1,013 in my edition) this weekend because today’s date is, or at least used to be, known in Ireland as “Lady Day”. August 15th was so named for the Feast of the Assumption. It traditionally involved pilgrimages to holy wells, especially those associated with the Virgin Mary or female saints. For some people, it still does.

At its height, the event was probably more popular in northern parts of Ireland, including the Monaghan of Patrick Kavanagh’s childhood, where it was one of the biggest religious holidays, “greater even than St Patrick’s Day”. Thus his memoir, The Green Fool, records the annual outing from Inniskeen to a local “Lady Well”, near Dundalk. Even then, the observance had been abandoned by more sophisticated locals. Kavanagh’s cart travelled via a back route known as the “Bohar Bhee” (“yellow road”), which “twisted by quiet fields away from the clever villages that laughed at ancient holiness”.

But the local clergy boycotted the custom too, doubting there was anything holy about it: “They said it was a pagan well from which the old Fianians (sic) drank in the savage heroic days. The peasant folk didn’t mind the priests. They believed that Saint Brigid washed her feet in it, and not Finn MacCoole.”

In the wider North, Lady Day was overtly political. From the 1870s, it became an occasion for Catholic (and by extension nationalist) marching – a green riposte to the Twelfth of July. Counter-protests were frequent. Rioting was not uncommon.

As late as 1919, this newspaper’s court reports included a round-up of compensation claims arising from that year’s “Dundalk Lady Day Riots”. It need hardly be said that there had been few actual ladies involved.

A claim by “John Reilly, Secretary of the Ancient Order of Hibernians, Ballybay, for £20 damage to a big drum” was dismissed on a technicality.  But there were several pay-outs, including one of £65 to a resident of Louth village whose house had been set on fire. Also compensated, by a sum of £9, was a Dundalk restaurant owner “for smashing of her shop windows by a soldier who alleged that he had been overcharged in the price of his dinner.”

Revealing mother and baby home records
Accommodating breastfeeding at work
Confronting anti-Semitic hate speech
Shared islands, divided opinion
A thank you to Pope Francis
Action on mother and baby homes
How essential is chocolate?
Shared Island Unit is a distraction
Protecting Cork from flooding
When is a pudding not a pudding?