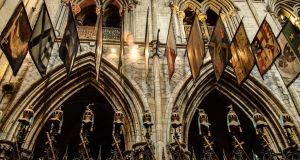 ‘It’s astonishing for the uninitiated to see how politicised, and indeed militarised, the Anglican church was in an era when it identified so closely with the state and its wars.’ Photograph: Getty Images

The case for keeping unpopular historical monuments on display somewhere, for educational purposes, is well illustrated by one of Dublin’s great cathedrals, St Patrick’s. There, alongside the tomb of Jonathan Swift and other tourist attractions, is a pair of monuments that, had they been located elsewhere in the city, unguarded, might long ago have been consigned to the bottom of the Liffey, and with some justice.

The cathedral’s guide to the 200 or so memorials therein, by Albert Fenton, is admirably frank about the embarrassment. The book gets straight to the point with the opening paragraph of page 1:

“It is unfortunate that two of the finest monuments in the Cathedral (the China and Burmah wars) are memorials to the British empire’s most unforgiveable wars. Indeed, the China war, also called the Opium war, was one of the most sordid and vicious events in the history of the empire.”

Paragraph two is even more bracing. “By the 1830s Britain had become the largest drug trafficker in the world,” it begins. The drug was closely related to heroin, and the empire’s best customers were the Chinese, who had taken in large numbers to the newish habit of smoking it. The government of China had understandably tried to ban the imports.

But Britain had a huge trade deficit with the country then, thanks to some of its own addictions, including tea. Whereas, opium excepted, China had little need of anything Britain had to offer. Thus, the British manufactured a war on supposed free trade principles and won. As Fenton writes: “It was the most humiliating defeat that China had ever suffered.”

Morality aside, the relief sculptures commemorating this and the later Burmese campaign are works of art. The former depicts the death of a Royal Irish Regiment officer in 1842: he is surrounded by comrades as he breathes his last. It looks heroic, but history has been unforgiving of the circumstances. Even at the time. If a future prime minister William Gladstone was right, no amount of memorialising in churches could expunge the guilt.

“I am in dread of the judgments of God upon England for our national iniquity towards China,” he wrote in his diary. He also feared it would “cover this country with permanent disgrace”.

“Palmerston’s Opium war” was Gladstone’s summary of the 1839-42 conflict. That was a reference to the then foreign secretary, who blandly characterised the drug trade as being about people “disposed to buy what other people were disposed to sell them”. Palmerston was an Anglo-Irish landlord. Among other tributes, one of the posher roads in Dublin 6 is named after him.

It wasn’t just the British who were pushing drugs then, in fairness. There were some notable Americans involved in the Chinese smuggling trade, including ancestors of Franklyn D Roosevelt and John Kerry. In the Second Opium war, Britain had an ally in Europe: France. China lost then too, no less humiliatingly. That was the one that forced them to cede Hong Kong.

Opium wars aside, if you were raised a Catholic – or even an atheist – in these islands, it can be quite a shock to visit an Anglican cathedral for the first time. In the iconography of Catholic churches, the most recent political events mentioned tend to be from Roman-occupied Jerusalem circa 33AD. So it’s astonishing for the uninitiated to see how politicised, and indeed militarised, the Anglican church was in an era when it identified so closely with the state and its wars. Whatever Gladstone’s doubts, the memorials suggest that Britain always had God on its side.

But for that reason, such buildings also serve today as museums, reminding visitors of history’s inconvenient truths. That may be less necessary on this island, where we are if anything too well versed in British sins, than on the neighbouring one. The need for reminders may be more pressing there.

Reviewing a new book about the opium wars a few years ago, the Economist lamented that the subject was “largely unknown by British schoolchildren” but that by contrast, as a matter of official policy, it was extremely well known by the schoolchildren of China.

For them, it began the “century of humiliation” which became the communist state’s founding myth. It can now be used to justify China’s own unjustifiable deeds. Even locals who see through the party’s propaganda on many things are susceptible to the appeal of this one. As the Economist summed up, paraphrasing the book: “The opium wars are always there, lurking in the Chinese subconscious . . .”

Pat Leahy: What Ireland can learn from the Germans