Lost Horizons – Frank McNally on a year of going nowhere 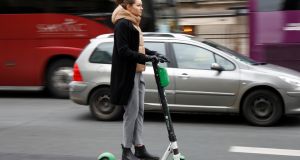 The past is a foreign country, as LP Hartley said. Viewed from the exile of this pandemic-haunted summer, even last January now seems like an exotic place. One of the more exciting things that happened to me while there was the arrival of an email one day from an actual exotic country – South Korea – inviting me to the “World Journalism Conference”, scheduled for Seoul in March. I had never visited Korea before, so very much looked forward to being its guest for a week, although we were beginning to hear then about a new virus in China, which placed a small question mark over the event. Sure enough, in February, another email arrived saying the conference was postponed – but only for a month.

The optimism of that was overtaken within hours by South Korea’s first major outbreak. It was no surprise when a third email quickly followed, this time deferring the conference until June.

June seemed far enough away then to have a sporting chance, at least. Alas, that soon evaporated too. The next email, I expected, would be the one announcing cancellation.

But no! Reflecting the dogged determination that saw South Korea squash the pandemic’s first wave while keeping the second to a minimum, without lockdown, the latest postponement was only until October. And even though that seemed fanciful too, it was a temporary licence for me to imagine autumn in Seoul, as I had previously imagined spring.

By now, I was almost enjoying these postponements. They were helping pass a difficult year. I looked forward to the next which, presumably, would push the horizon back to spring 2021. Then the latest email arrived this week and announced that the conference would go ahead – in the now dreaded word – online. Deep sigh. As Robert Louis Stevenson nearly said, it is a better to travel hopefully, even in the imagination, than to arrive anywhere by Zoom.

Another thing that has been disappearing over my horizon, if less exotically, is a 5k road race in Tallaght for which I managed to secure entry earlier this summer. Limited to 400, in line with the expected relaxation of lockdown rules, it was first scheduled for early August and then, when the relaxation didn’t happen, mid-August. Now it has again receded. Like an electric hare at a greyhound track, it may elude the field indefinitely.

In the meantime, the only other non-virtual 5k event available for those of us starved of such things was the Dublin Athletics Board Graded Meetings series, the last of which in a much-truncated season took place this week.  Even the act of entering it required a level of athleticism which was at the upper limit of my ability. I had to set my alarm for 5.45am last Friday because entries opened at 6am and would be sold out within minutes.

The good thing about graded track meetings is that the fields are small (the only reason such events could be held in current circumstances). But that’s also the bad thing about them. They tend to attract only the hardcore. As I was reminded during 12½ laps of pain on Wednesday night, even their slowest events are too quick for me these days. Also – speaking of horizons – there are no such thing on a running track. In most road races, at least, the faster people can overtake you only once. After that, they usually have the decency to disappear.

There was worrying news this week about another athletic discipline in which I still consider myself world class – walking slowly and aimlessly around foreign cities for hours at a time. The best venue for this is Paris, which I must have covered every metre of over the years and where they coined the word for those who do it, flâneur.

Apart from the shortage of people to watch, the pandemic should have been good for Parisian flâneurs. And on the plus side, it has allowed the city mayor to continue her campaign against their traditional enemy, cars.

But writing in the London Times, self-confessed flâneuse Agnès Poirier reports that the move towards “soft mobility”, as it’s called, is dominated by other wheel-based transport – bikes, scooters, motorised skateboards, etc.

Between café terraces expanding outwards and bike lanes expanding in, she laments, the flâneur is suddenly a threatened species.

Even “soft mobility” vehicles are not that soft when they hit you, I imagine. Still, I wouldn’t mind taking my chances just now.

Unfortunately, as seen from Dublin, the prospect of being mown down by an electric bike while strolling the Paris boulevards anytime soon is just another romantic notion.