Keeping a light on: ordinary heroes of Syria’s eight-year war 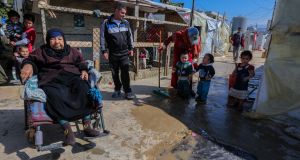 Syrian refugees in Mohammara, Akkar province in northern Lebanon on March 9th, 2019: It’s hard to imagine what it means, to drop everything and run with your family. Photograph: Nabil Mounzer/EPA

This month the war in Syria will turn eight years old. Children have been born, raised and lost since those first peaceful protests in 2011 calling for regime change. No one could have imagined then that what followed would be so brutal or last so long.

Today, millions of ordinary people are still bearing the brunt of that conflict and nowhere is the situation more acute than in Idlib province. Here, in an area the size of Co Clare, over three million civilians are trapped between the advancing pro-government forces and the closed Turkish border.

Half of these people are families who have already fled other parts of Syria, in one of most unimaginable upheavals in recent history. They now have nowhere else to go.

It’s hard to imagine what it means, to drop everything and run with your family. To be in your own country, but far from your home – far from the place where you once planted roses, or walked to the baker’s each morning, or knew all your neighbours by name.

Three million shopkeepers, nurses, university students, teachers, tailors, former factory workers. Many do not even have the benefit of a space in a proper camp, living only in a tent on a bare patch of land. No water, no toilets. No school or clinic or way to earn a living.

Many more are people who, having already fled their home once, tried to create a new home among strangers. They sowed wheat and barley and tried to put down roots. Then they had to move again, as the fighting came closer and the bombs kept their children awake, forcing them to leave everything behind a second time.

“I do not know what is going to happen next,” a kindergarten teacher called Haifa says. Haifa has a six year old and a three year old, and worries about the toll any more upheaval would have on her elderly parents.

Bassam, a secondary school teacher, tells of how he felt: “I can say the international community, both governments and people, have let the Syrian people down.”

In the face of that, it is extraordinary how many stories contain the seeds of hope. Unpaid volunteers have opened schools in camps to try and give children there some semblance of an education. A teenager is making prosthetics for those who have lost limbs in the bombings. Parents doing their very best to keep their children clean, safe, and clothed.

In particular, I keep thinking about the father who bought a battery with the minimal wage he earns, so that his children will have a light to comfort them at night.

These are the millions of civilians who face abandonment if lifesaving aid is withdrawn or a new military offensive is launched. Idlib is one of the last areas not controlled by the Assad government. According to the UN, there are approximately 30,000 rebel fighters in the province, of whom 10,000 are designated by the UN as terrorists.

This complicates things enormously. Though all the main humanitarian agencies in Idlib have put strict measures in place to ensure aid only goes to the most vulnerable, and is not stolen or co-opted by armed groups, some European governments have been considering suspending aid to the region. The 173 members of the Syrian NGO League recently warned of the “devastating” consequences this would have for emergency medical and humanitarian assistance.

In the words of Dan Altman, head of the main government aid watchdog in the US, “These are really, really complicated environments.” But that should not mean we abandon people, simply because their territory is controlled by an armed group they did not choose and have likely suffered under themselves.

A gathering in Brussels this week renewed aid pledges to Syria. But a peaceful political resolution to the war is still needed, to avert what UN secretary-general António Guterres has warned would be “a humanitarian nightmare” in Idlib if a large-scale military assault was launched.

Closer to home, Ireland promised in 2015 to accept 4,000 mainly Syrian refugees. Four years later, we have taken in only 2,152. To put these numbers into perspective, Lebanon, a country seven times smaller than Ireland, has taken in approximately one million Syrian refugees.

There is a common accusation made that Middle Eastern countries should be doing more about Syrian refugees. But countries like Turkey, Lebanon and Jordan are bearing the brunt of the crisis – along with all those Syrians still inside Syria, who have taken in millions of their displaced fellow citizens.

We can and should do better.

The war has gone on so long and been so devastating that many of us feel exhausted simply hearing about it. But it is unimaginably worse for those at its epicentre. In all of the politics, it is crucial to remember that this is a war with human beings at its heart.

After eight years, they are still there, trying their best to find work and plant vegetables and raise a family; to keep a light on for their children in the dark.

The very least we can do is not abandon them.

Riona Judge McCormack is currently working with the Syria programme of People in Need, one of the first humanitarian organisations to respond to the conflict there