Irish culture is facilitating the domestic abuse of women 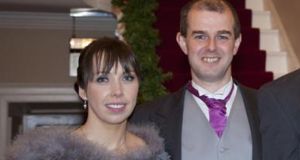 Clodagh Hawe, who was killed, along with her three children, by her husband, Alan

While men are more likely to be victims of homicide, for the most part they are murdered by other men.

Women on the other hand are most at risk of being murdered by intimate partners in their own home.

In fact, of the 225 women that have died violently in the Republic since 1996, 61 per cent were killed in their own homes and of the cases that have been resolved, 56 per cent were murdered by a current or former male intimate partner.

In this same period, 14 children have died alongside their mothers, during an incident of intimate partner violence.

Some 21 of the 22 murder suicide cases documented during this period were the woman’s partner or ex-partner.

The key question is how we understand and address this issue. Perspective is important. If we think about the problem of mass shootings in the US, we often see an emphasis on the mental health of the shooter. These attacks are often presented as a troubled young person acting alone. There is usually no attempt to see this type of violence as patterned. For people here, it can seem very obvious that gun culture and gun availability is part of the problem.

However, it is always easier to see aspects of another culture that jars than it is one’s own.

Culture by definition is assumed and unremarkable. So what is it in our culture that is facilitating domestic abuse of women?

Well, a first clue is the way that we view and protect family life. In fact, we care about the concept of family so much that we have it enshrined and protected in article 41 of the Constitution.

In everyday life, this can mean that we sometimes see it as inappropriate to intervene in relationships that are perceived as domestic. Research shows that witnesses to violence are less likely to intervene in situations where assumptions are made about familial connections between victims and perpetrators.

In analysis of the 38 eye witness statements to the Court during the trial of two boys for the abduction and murder of James Bulger, of those who had encountered James Bulger, failure to intervene could be attributed to the fact that witnesses assumed – or were told – that the three boys were brothers. So family it would seem, can be a category where we can feel prohibited from intervening.

Even a group of seasoned professionals such as family law judges are not immune to such cultural influences.

Research has found that domestic abuse was not seen as relevant to decisions on child access by judges in contrast to other jurisdictions where domestic violence is centrally relevant and framed as a form of child abuse.

Taking the evidence together, it would appear that those who witness interactions between spouses and partners or parents and children that they might find questionable or even worrying may be disinclined to intervene because they view it as a private family matter.

In this way although we are aware that women and children are at risk at an abstract level, it can be difficult for neighbours, teachers, friends and even other family members to question or comment.

A man who controls access and information to family members may be seen as annoying, but ultimately go unchallenged out of respect for his position in the family.

Eyeballing the incidents since the turn of the century makes it clear that the rate of familicide is rising.

We need a systematic approach to address the problem.

Over the last number of days – in the wake of interviews with the sister and mother of domestic murder victim Clodagh Hawe – there have been calls for the introduction of a review process for domestic homicides which might at least allow us to learn from these painful and traumatic events. It is, of course, a difficult debate, particularly for those directly and indirectly affected by the intense trauma of intimate partner violence. And it is not an easy one.

These are not reasons for inaction. It is important we interrogate how domestic abuse and homicide in 21st-century Ireland presents if we are to have any hope of addressing it.