Protestants in Ireland: a minority in search of an identity?

Community links typical in Wexford not necessarily to be found elsewhere 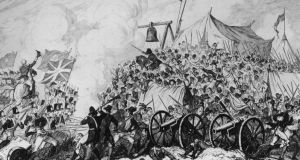 What does it mean to be Protestant and Irish? This is a question Protestants in the Republic have been asked more frequently in recent years, as the end of the Troubles in Northern Ireland has led to a new freedom to talk about many aspects of our society.

I find this new curiosity refreshing. As a historian who often engages with the public at local history talks, I am often approached by people with stories they have never told before, about the intersection between Protestants and Catholics in their community.

In communities where Protestantism is less common, they may ask: “Are you Orange?” I answer: no, more nationalist with a very small ‘n’. Our community would know well the family was traditionally Fine Gael.

“Is the Queen of England the head of your church?” No, she is head of the Church of England, we – the Church of Ireland – are an independent church with its own democratic structure, but with an association with a group of churches known as the Anglican Communion.

Protestant communities are not homogenous: they each have unique features, depending on the reason for settlement, the community in which they are located, and ‘events’, those tense periods in history where ‘things happened’.

I grew up in Wexford in the 1960s. Now, Wexford, with the 1798 rebellion, and the Fethard-on-Sea controversy, might be seen as difficult area for inter-religion relations, but in fact it is quite the opposite.

As a Protestant child in Wexford, the only difference was the church on Sundays. We were firmly part of the community, as children loved and minded like others. My sister and I did Irish dancing (badly, in my case), with costumes loaned for feiseanna by our neighbours, who happened to be Catholic.

'Wex-ford? We’ve heard our people were very badly treated in Wex-ford.' And we would get into a mutually enlightening, good-natured conversation

We had a hurling pitch on the farm. Our mother and aunts were in the ICA, our father in Macra na Tuaithe. In his later years, he became a keen local historian who was on the 1798 bicentenary committee. Of that, tellingly, he said: “If we had put as much work into the rebellion itself, we might have won.”

Researching the history of the volunteers in Wexford gave a keen glimpse into the conscious protectiveness of the Catholic community there to us Protestants. In the early summer of 1914, just before the outbreak of the first World War, the volunteers were enlisting heavily, putting pressure on London to implement Home Rule.

As hundreds joined up in the small towns of north Wexford, the local volunteer leaders wrote to the Church of Ireland and other clergy, and to the Quaker community, saying that Protestants should not be afraid, this was not about sectarianism.

It was a kindly move, and the Protestant clerics responded that they were grateful, and understood this was an important time for Ireland. Somehow, we had all learned since 1798.

In our family we did not see 1798 as essentially sectarian, more as a war in which difficult events happened. Our grandmother had family saved in Old Ross, one of many examples we can give of neighbours offering a protective cloak when times got heated.

When I moved outside the community, to live in Dublin, it became clearer that the strong community friendships that typify Wexford and the southeast are not necessarily the same everywhere in the Republic.

Take, for example, engagement with the GAA – in Wexford, it was quite normal. Perhaps not so in Kerry or Clare.

Living for two years in Belfast, that sense of an integrated community in Wexford became more highlighted to me. At the same time, in casual encounters people would again display that new curiosity: “Wex-ford? We’ve heard our people were very badly treated in Wex-ford.” And we would get into a mutually enlightening, good-natured conversation.

Discussions such as these have encouraged fellow historian Ian d’Alton and myself to publish an edited collection of essays on the broad topic of how Protestants tried to fit into their communities in the newly independent Ireland, from 1922. We feel these ponderings about Irish identity are timely with this new curiosity and the many ways of being Irish now.

Protestant and Irish: the Minority’s Search for Place in Independent Ireland, edited by Ian d’Alton and Ida Milne, is published by Cork University Press

1 Restaurants and gastropubs to reopen in December under Government plan
2 Helen McEntee holds up well for someone with barely a leg to stand on
3 Admission of mistake in Oxford vaccine dose raises doubts over reliability
4 In Brexit end game, Johnson scours menu of unpalatable choices
5 The Crown’s Josh O’Connor: ‘I’m a republican. I’m not interested in the royal family’
Real news has value SUBSCRIBE