Boris Johnson says ‘every chance’ of Brexit deal with EU 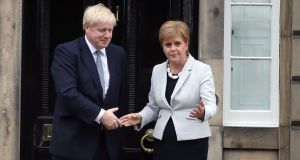 Boris Johnson has contradicted Michael Gove’s assertion that the British government was working on the assumption that a no-deal Brexit is the most likely outcome. Speaking at a nuclear submarine base in Scotland, the prime minister said there was “every chance” he could reach a deal with the European Union before Britain leaves on October 31st.

“My assumption is that we can get a new deal, we’re aiming for a new deal. But, of course, Michael is absolutely right that it’s responsible for any government to prepare for a no deal if we absolutely have to,” he said.

Mr Johnson has ruled out agreeing to any deal that includes what his government now routinely calls “the anti-democratic backstop”. But he said on Monday that he wanted to engage with other EU leaders, including Taoiseach Leo Varadkar, with whom he is expected to speak later this week.

“Look, my approach is to be very outward-going. I don’t want the UK to be aloof or hanging back. I want us to engage, to hold out the hand, to go the extra mile, the extra thousand miles. And what we want to do is to make it absolutely clear that the backstop is no good, it’s dead, it has got to go. The withdrawal agreement is dead, it’s got to go. But there is scope to do a new deal,” he said.

Mr Johnson has not yet responded to invitations from Angela Merkel and Emmanuel Macron to visit their countries and his failure to speak to the Taoiseach in his first days in office has raised eyebrows. Earlier on Monday, his official spokeswoman said he would not sit down with EU leaders just to be told that they cannot reopen the withdrawal agreement. But he said in Scotland that he was not avoiding contact with them or waiting for them to make Britain a better offer.

Mr Johnson was booed as he arrived at Bute House in Edinburgh to meet Scotland’s first minister Nicola Sturgeon and he left by the back door after the meeting. A Downing Street spokesman said the prime minister told Ms Sturgeon he was a passionate believer in the power of the union and promised to “work tirelessly” to improve the lives of people in Scotland.

“On Brexit, the prime minister said that while the government’s preference is to negotiate a new deal which abolishes the anti-democratic backstop, the UK will be leaving the EU on October 31st come what may,” the spokesman said.

Earlier, Mr Johnson met the Scottish Conservative leader Ruth Davidson, who warned this week that she could not support a no-deal Brexit. Ms Davidson described the meeting as “incredibly constructive” and suggested that the prime minister had reassured her that he is seeking to leave the EU with a deal.

“We covered a number of areas, talking about Brexit, the need to make sure we can get a deal across the line, and I support the prime minister wholeheartedly in getting that deal. We talked about how we can continue to have the UK government deliver in Scotland, for Scots, and how we can build on that delivery, and also how we can continue to take on Nicola Sturgeon and oppose her obsession with another independence referendum,” she said.