Kathy Sheridan: The fight now moves on to Los Angeles 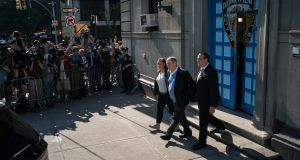 As court officers escorted Harvey Weinstein off to custody, he left behind the walking frame on which he had conspicuously leaned for much of the trial. A telling detail about the man. Photograph: Todd Heisler/the New York Times

Braced for a loss, few had dared to hope that a day that began with Harvey Weinstein breakfasting in The Four Seasons would end with his wrists in handcuffs and the label “rapist” forever attached to his name. As court officers escorted him off to custody, he left behind the walking frame on which he had conspicuously leaned for much of the trial. A telling detail about the man.

It was a cautious jury that took five days to convict him on two counts and to acquit him on three, including the most serious charges including one of predatory sexual assault.

1 No April Fool jokes please, we are not in the mood
2 A letter to Ireland from Italy: this is what we know about your future
3 Coronavirus tales confirm – and shatter – German stereotypes
4 Coronavirus: New powers for gardaí expected to come into force
5 Coronavirus: Notion of a rapid economic recovery is at best wishful thinking
6 Coronavirus outbreaks in nursing homes, hospitals to be tackled in new plans
7 Covid-19: Critically ill Irish patients to take part in global clinical trial
8 Miriam Lord: Vigilant Richard Boyd Barrett keeps the Hungary at bay
9 Róisín Ingle: Have you snapped yet? I did the other day. Five times
10 From eating healthily to staying warm, how to treat Covid-19 in the home
11 Tempers fray as coronavirus lockdown fatigue hits Italy and Spain
12 ‘My husband uses my past infidelity as a stick to beat me with’
13 How five days of evangelical worship set off the coronavirus outbreak in France
14 Nice to see you: Which is the best video calling option around?
15 Coronavirus: Schools reopen to provide food parcels to needy families
16 Heavy drinking linked to health problems later in life, study finds
17 Look on the bright side: International Space Station visible in Irish skies tonight
18 Fierce backlash to Dutch hard line on eurobonds
19 Coronavirus: More than 650 beds secured for asylum seekers in direct provision
20 I was on the Peru rescue flight. This is what happened
21 Coronavirus: Equipment shortfall brings test results down to 1,500 a day
22 Netflix: 10 of the best new shows and films to watch in April
23 Trinity College Dublin acquires IFSC block for €16m
24 Coronavirus: Republic reports 17 further deaths, 325 new cases
25 Body of woman found in house in Killiney, south Dublin
26 Covid-19 crisis puts value of the modern-day office into focus
27 From yoga to HIIT training, your guide to solitary exercise
28 Coronavirus: Letters flow to self-isolating father whose children were found dead
29 Medtronic shares ventilator design publicly to increase production
30 Netflix has revealed its most-watched content. You might be surprised
31 Fintan O’Toole: We can’t help giving meaning to this absurd virus
32 Coronavirus: France, Spain and UK suffer highest daily death tolls
33 Coronavirus: How to keep children happy, learning and entertained at home
34 Coronavirus: Restrictions resulting in ‘huge’ fall in rate of infection growth
35 The Irishman living in lockdown in Madrid as it is brought to its knees by Covid-19
36 The Strokes: ‘There was conflict, fear, and we got through it and made records’
37 Members of same household may exercise together, Government confirms
38 Construction firm stops work on national children’s hospital
39 Coronavirus: Catholic priests under pressure to perform funeral Masses despite Covid-19
40 Leaving Cert: ‘It feels aimless. I don’t know what the story is’
Real news has value SUBSCRIBE