Kathy Sheridan: Katie Hill is the victim of a new blackmail

The former US congresswoman has said she was worried that if she stayed in office, more compromising images would emerge

US congresswoman Katie Hill has hit out at misogyny and "double standards" during her resignation speech. Hill has stood down after she was accused of an affair with a staffer and intimate pictures of her were posted online. Video: C-Span 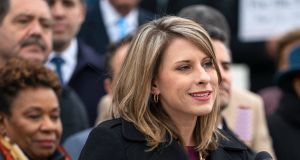 The leaked nude image of her looking cosy with a female campaign staffer undoubtedly introduced some sexy thrills in some humdrum lives but it broke no rules. The allegation of a relationship with a congressional aide was more serious. A House member is forbidden to engage in a sexual relationship with any employee who works for that member. Hill apologised for the affair with the campaign staffer but described the second story as “absolutely false”.

Just a year ago, the newbie representative was a shooting star on Nancy Pelosi’s leadership team. Then Pelosi said her position was untenable. An ethics committee investigation was about to open when Hill chose to resign.

Irony of ironies, the first person to fall foul of new rules designed to call time on generations of entitled men turns out to be... a woman

The first disturbing element of the story is its presentation as one of woke millennials versus wizened old folk who freak at words like “nude” and “bisexual”. Are older people incapable of critical thinking?

The second is the portrayal of Hill as a victim. Irony of ironies, the first person to fall foul of new rules designed to call time on generations of entitled men turns out to be... a woman. And a bisexual one at that. It’s a strange one, isn’t it ? But the rules apply to everyone.

It’s the third element that muddies the waters; the route by which Hill’s private images and texts made their way into the media. Amidst a nasty divorce, Hill’s husband, Kenneth Heslep – who only managed to hold down jobs at his wife’s homeless non-profit because of her influence, according to his own divorce documents – rang a podcaster offering “the whole story”.

Suddenly, 700 of Hill’s images and private texts were in the hands of a radio host called Joe Messina, a self-described “right wing, Bible-thumping, white guy”. Strikingly similar material quickly made its way on to a right-wing website and the Daily Mail, which splashed some nude images in typically Christian fashion along with detailed reporting by a Jennifer Van Laar.

Inevitably, the right wing, Bible-thumping, white guy turns out to have been a campaign adviser to Steve Knight, the Republican incumbent defeated by Hill a year ago as was Van Laar, who does paid political work under a different name, according to the Los Angeles Times. Neither she nor the Daily Mail nor the website saw any reason to mention this.

Women have always been vulnerable to shame, humiliation and sexualised harassment in a way that men have not

“I don’t hide it and I don’t act unbiased,” Van Laar tweeted, while declining the Los Angeles Times’ request for an interview. The National Republican Congressional Committee denied any link to Hill’s stolen property, as did Knight who also denied any contact with the husband, Heslep. Heslep’s father said his son was claiming he was hacked: “I think he started having computer issues, so that’s what made him think it was a hacking.” What are the chances?

The official story of Katie Hill would probably read like this: Representative Katie Hill resigned following an allegation of a sexual relationship with a subordinate, in violation of House Rule XX111, clause 18 (a).

The question is not whether Hill broke House rules. She’s been dealt with. The question is which woman is next? Because it’s too easy. Women have always been vulnerable to shame, humiliation and sexualised harassment in a way that men have not. Looking to the east of us, we don’t need a new report from Rutgers University to tell us that one of the most significant barriers to women running for office is threats of violence and fear of those threats. Hill has said she was worried that that if she stayed in office, more compromising images would emerge. It’s blackmail, effectively, and it works. “I don’t think we’re really talking about how targeted and serious this is. We’re talking about a major crime… being committed against her,” said Alexandria Ocasio-Cortez.

Instead the word from the wise is to guard your privacy from the day you are born and trust no one. Nancy Pelosi addressed it as a parent: “I do say to my own children and grandchildren, especially young children, you know, some of these – I don’t know what to call them – appearances on social media can come back to haunt you if they are taken out of context and that. But I do think that we have to be careful.”

Who would disagree. But who of any age has not been naïve? Who has never sent texts that would fail the headline test? To advise young people to guard their privacy without attacking the malignant context is a declaration of surrender. It’s like declaring that a rape victim should have stayed sober without remarking on the role of rape culture or the actual rapist.

That’s not a generational issue. It’s an age-old grief for us all, amplified. It’s a crime.