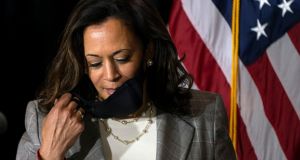 Donald Trump’s instinctive response to women, contrary to what he’d like you to believe, is neither lust nor derision. The US president, whose carefully constructed persona could be described as “boneheaded bully boy with all the charm of a viral droplet”, doesn’t actually look down on women. Despite his brags, he doesn’t much want to grab them either – if he’s in the habit of taking anything to bed with him, according to his biographer Michael Wolff, it is a cheeseburger and three sets of remote controls.

His actual response to women, strong women especially, is fear.

After Joe Biden announced on Tuesday that his running mate would be California senator Kamala Harris, Trump responded by referring to her as “nasty” no fewer than four times, as well as a “madwoman” and the “meanest, most horrible, most disrespectful” member of the Senate. And then he immediately descended into pushing vague “birther” theories about her entitlement to run. All in all, she couldn’t have asked for a better endorsement.

“Nasty”, in particular, is a Trump tell. He uses it for men and women in almost equal measure, according to a running tally by the Washington Post. He also uses it for magazines, TV ads, the occasional review. But it is at its most revealing and flattering when he uses it about women. Those he deems nasty include Hillary Clinton, Nancy Pelosi, Elizabeth Warren, Danish prime minister Mette Frederiksen and Meghan Markle.

Its counterpoint is “nice” which, in Trump’s world, means meek and manageable. The women who would vote for him won’t be nasty women but, he tweeted last week, “suburban housewives”, a demographic that barely exists any more outside of the fevered imaginations of men like him.

According to data compiled by the US Institute for Family Studies and reported in the New York Times last week, suburban stay-at-home women now make up just about 4 per cent of the American population – and how many of them would choose such a retrograde moniker to describe themselves?

Trump needs the largely white cohort of suburban-living women who voted for him in 2016 to turn up again, but deep down he must realise it’s not going to happen: according to a June poll, 66 per cent of them of disapprove of him. He’s trying to appeal to them at a time when their children’s education has been disrupted, their family finances are insecure, and they are frightened by the unchecked spread of coronavirus.

“They want safety & are thrilled that I ended the long-running programme where low-income housing would invade their neighbourhood,” he went on in a tweet which was not actually meant for his mythical housewives, but as a racist dog whistle aimed at men like him – men clinging to the world as it was in 1968, a world of passive suburban housewives, alpha providers and “nice, white” neighbourhoods.

It was aimed at men who are alarmed by the changing world and all women, uppity women like Harris especially. Men exactly like him. When he says a woman is “nasty” what he means is “terrifying”.

Where to begin? There’s the fact that she is definitely not afraid of them – as evidenced by her resume in public life, which is a long line of tenacious grillings of powerful men. Those she has filleted during hearings, inquiries and at town halls include now supreme court justice Brett Kavanaugh; former attorney general Jeff Sessions, who whined that his memory lapses were because she “makes me nervous”; his successor William Barr; and Biden himself.

That’s not what most scares insecure men like Trump, though. What they’re really afraid of is what she represents – piercing wit, quiet strength, simmering rage. They’re afraid of her relative youth (she is 55 to his by no-measure-youthful 74), her diverse heritage. They’re afraid of her ability to thrive in the modern world. They look at her and see their own growing irrelevance mirrored back at them.

The young women of the White House press corps have noted Trump’s fear of mouthy women and have started exploiting it. CBS reporter Weijia Jiang pointed out in May that Trump pleaded with her to be “‘nice and easy’ three out of the last four times I asked him a question”, as though she’s an armed terrorist and he’s a nervy hostage negotiator.

Kamala Harris is not a perfect choice, but she is an inspired one. Her claim to have been a “progressive prosecutor” was systematically torn apart in a 2019 oped in the New York Times by law professor Lara Bazelon, who accused her of fighting “tooth and nail to uphold wrongful convictions that had been secured through official misconduct” and called on her to apologise. Last week, Bazelon said she stood by her oped, but added that Harris’s record in Senate was “way better”.

Harris’s bid to be the first name on the Democratic ticket started on a high, but stuttered to a halt after she failed to set out a clear rationale to voters. She was a bit light on policy, slightly slippery in terms of her core beliefs.

What has been criticised as her “vagueness” though, is not necessarily a bad thing. She’s an inspired choice for exactly the reason Trump fears her – because of what she represents. When Trump looks at Harris, he sees the world as it actually is, not the world he wants to return to, a time pre-civil rights, pre-globalisation, pre-nasty, mouthy women. He looks at her and sees a foreshadowing of his own demise, the end of the reign of the self-styled alpha bully boy. Democrats’ best hope is that voters will look at her and see the same.