Rampant lawlessness in oligarchic nation is facilitated by Brussels and Berlin 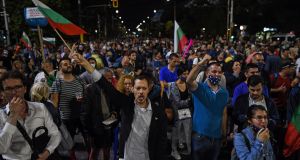 The rule-of-law crisis that has convulsed the European Union in recent years has mainly focused on “democratic back-sliding” in Hungary and Poland ,as ruling parties in those states have sought to rig elections, strangle pluralist institutions and silence independent media.

But the alarming pattern of abuse of power in Europe is not confined to Budapest and Warsaw. In Bulgaria this summer a full-scale political crisis has unfolded in tandem with an alarming uptick in Covid-19 infections.

Bulgarians have been out on the streets in large numbers for four weeks protesting the government led by prime minister Boiko Borissov, leader of the centre-right GERB party, whom they suggest heads an administration closely associated with predatory criminal forces.

The protests followed on from a series of dramatic leaks that included photographs of Boiko Borissov, half-naked in his bedroom, next to a bedside locker filled with €500 notes, a handgun and gold bars.

Borissov does not deny that he is the individual in the photographs or that the images are of his bedroom. He argues, however, that the images have been digitally doctored to include the money and gun. An earlier recording featured him threatening to “burn” a female Member of the European Parliament.

The charismatic Borissov is in his third term as prime minister, having come to office in 2009 on the back of a strong anti-corruption platform and a focus on tackling organised crime. Once in office, however, GERB took political cronyism to absurd new levels; this year has seen it embroiled in a seemingly unending series of scandals.

Endemic corruption and organised crime blight Bulgaria 30 years after the end of communist rule, and it remains the poorest member of the European Union, with a GDP per capita of 53 per cent of the EU average, despite massive subvention from Brussels since joining the bloc in 2007. Transparency International ranks Bulgaria 74th in the world for corruption, the lowest ranking of the 27 EU states. A demographic disaster has accompanied economic stasis as the population has dwindled from nine million to less than seven million in those three decades.

This is a world in which powerful oligarchic networks have succeeded in “capturing the state”. In turn this has helped to sustain patterns of nepotism and theft of public resources among the elite while condemning the majority of Bulgarians to a precarious existence characterised by low and stagnant wages and ever-increasing prices. The state, far from representing a countervailing force to rapacious oligarchy, is comfortably accommodated within its tentacles.

Disentangling these vectors of “shadow power” would, in any normal society, fall to an independent and vigorous media. But in Bulgaria the media has been swallowed almost whole by the oligarchic class.

The recently published Press Freedom Index for 2020 places Bulgaria at 111th in the world – below Ethiopia, Liberia and Mali, and more or less level with Nigeria. This is an extraordinary position for an EU member state to find itself in and reflects how the oligarchy’s tentacles have enveloped both public and private media over the past decade.

One of the key figures in this crisis is a widely detested media oligarch called Delyan Peevski, known locally as Potbelly. Peevski is the scion of a well-connected family that owns Bulgaria’s largest newspaper and television group. In 2007 he was sacked from his post as deputy minister and investigated for attempted blackmail. His short-lived appointment in 2013 as Bulgaria’s “security tsar”, the head of the State Agency for National Security (DANS), triggered months of political turmoil.

The vast majority of people protesting are not members of political parties, nor have they had an association with formal politics before. They are not organised, except in the loosest sense of coming together via social media networks, organised more or less spontaneously. The common denominator that links the protesters is that they have had enough of gangsterism and racketeering, and of latent nepotism among a golden circle of political and business privilege. They demand an end to the endless abuses of power by corrupt politicians servicing their “business” clients. What they want, they frequently state, is to live in a “normal” European country.

The European Union, however, does not emerge well from this crisis. After Bulgaria joined the EU in 2007 it was subject to a probation-like regime called the Co-operation and Verification Mechanism. The idea was that Sofia would continue to be subject to the EU “conditionality” model, which preceded accession and required Bulgaria to continue on a reform path. The mechanism, however, has been an abject failure: hardly any real reform has been introduced subsequent to 2007.

The oligarchs and their political supplicants have been increasingly associated with fraudulent processes whereby EU funding has been channelled to a privileged network of individuals and families. Indeed, some of them openly boast about their ability to divert millions in EU funds to friends and supporters.

The protest movement has singled out Ivan Geshev, Bulgaria’s powerful chief prosecutor, as a key figure . His continuing tenure in office is evidence enough for protesters of the arbitrary nature of the rule of law in Bulgaria and of the utter failure of the EU reform process.

In contrast to Hungarian prime minister Viktor Orban, Borissov has steered an entirely non-confrontational path within the EU. On becoming prime minister for the first time in 2009, he made it a priority to cultivate a good relationship with Angela Merkel. His GERB party is, like Merkel’s CDU, a member of the centre-right European People’s Party, as is Fine Gael. Wherever possible he has sought to position Bulgaria as helpful and constructive in the European Council. In return, EPP leaders have chosen to look away (much as they did with Orban), as one scandal after another engulfed Borissov’s government.

The protection offered by the EPP has only empowered the structures associated with GERB and – so far – made them unassailable. Rampant lawlessness in Bulgaria is directly facilitated by Brussels and Berlin. It remains to be seen whether the protest movement succeeds in changing this.

Professor John O’ Brennan holds the Jean Monnet Chair in European Integration at Maynooth University, Ireland. He is also the Director of the Maynooth Centre for European and Eurasian Studies.