The internet has made the hounding business low cost, low risk and 24/7 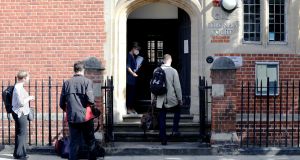 A queue develops outside Poplar Coroner’s Court, High Street, Poplar, London, prior to the resumption of the inquest into the death of television presenter Caroline Flack. Photograph: Jonathan Brady/PA

“Hounded” was a word that came up again and again during the inquest into the death of British television presenter Caroline Flack last week.

Her mother, Chris Flack, used it to describe the treatment meted out to her daughter by the media. Her former boyfriend, Lewis Burton, used it too. So did her twin, Jody Flack.

Flack had admitted hitting him and, at the time of her death, learned she was to be prosecuted despite the fact that he had withdrawn his complaint. The coverage was “spiralling out of control” said Jody Flack.

Ruling her death a suicide, the coroner Mary Hassell, too, alluded to the role of the media.

“The more famous she got the more some of these difficulties increased. She had to deal with the media in a way most of us don’t.”

It’s true that few of us have to deal with the media in the way Flack did. The nature of her career forced her into the same Faustian pact with the British tabloids most celebrities have to make. Like most celebrities, she thought she’d come out on top.

But it was not only the media who harassed her. It was also the below-the-line commenters on news sites, the “nothing personal, hun” hate-followers on social media.

If you want to participate in a bit of recreational shaming and hounding these days, you don’t need a job at a tabloid. All you need is wifi. And you don’t have to be a celebrity to know what it’s like to be relentlessly harassed or bullied.

As Caroline Flack learned to her cost, the internet has made the hounding business low cost, low risk, accessible 24/7. Her misery wasn’t caused by a single source; she succumbed to an entire eco-system of harassment and hate.

Her death was supposed to be a turning point, but all that happened was the hashtag “#bekind” trended for a few days.

In reality, what we’re witnessing online is more than just the occasional absence of kindness. It’s not nearly so benign as that. Every day, some public figure – sometimes, they’re not even a public figure – finds themselves at the bottom of that same eco-system food chain for the crime of being deemed “problematic”.

Being problematic can involve saying or doing something hateful, tasteless or being merely out of touch with the consensus. It can involve trying to explore the nuance in a complex issue. Sometimes it can just mean liking the wrong tweet, as JK Rowling found when she meant to screenshot a tweet on the trans issue and accidentally liked it instead.

Or it can, as the Irish presenter Laura Whitmore discovered last week, involve posting an ad on Instagram for a new podcast series she was a guest on, which was sponsored by the British army.  “Oooof.dont think ur getting invited to next year’s Easter celebrations [irish flag]” went one of the milder responses online.

In an almost perfect example of the average trajectory of a Twitter insult, another went from clarification-seeking to insult to death threat in 101 characters: “You’re an Irish woman promoting the British army to her fans? F*** off out of here worst Irish woman ever. Go kill yourself.”

Asking why there are so many extraordinarily angry people on the Internet is like asking where the other socks go. Some things just are. The answer is to do with the shield of anonymity, the depersonalising effect of being online, and the fact that we seem, according to the various scientific studies on the issue, to just enjoy the heady rush of righteous fury someone else’s transgressions give us.

There’s a vicious, collective joy in tearing down people we perceive as more successful or higher profile than us. The more prosaic answer is that our outrage is making a lot of people in a few social media platforms very rich. An angry audience is an emotionally engaged audience.

If everyone participating in the rage marketplace was a consenting adult, that would be one thing. You could at least argue that they entered into social media’s version of the Faustian pact with their eyes wide open. These days, though, there are eight-year-olds with TikTok accounts and thousands of followers; eight-year-olds who will one day, as sure as the sky is grey, find themselves declared problematic for something or other.

Having spent the last few years grappling with how better to moderate our children’s relationship with screens, it all fell apart this year. In the early days of lockdown, many of us thrust devices into the hands of our children. We gave them smartphones or tablets preloaded with hate, harassment, shame and self-loathing.

The short-term need to educate and entertain them overruled longer-term misgivings about what happens to humanity when it is performed from behind a screen. There’s the cesspit, children, we said. Wade on in. No, you don’t get any instructions or even a lifejacket.

At the same time as my own children’s relationship with technology was unavoidably intensifying, I was loosening its hold on me. After a decade of near-daily use, I deactivated my Twitter profile over a month ago. Within a day, I’d stopped reaching for it. Despite everything that’s going on it, the world has seemed brighter since.

Part of Caroline Flack’s appeal as a TV presenter was that she seemed, for a time, ordinary, relatable, someone like us. If there is any deeper meaning to be gleaned from her short, colourful life and sad death, it is that we were right all along. She is like us. The tragedy is we could be just like her.

1 Ireland should allow controlled spread of Covid-19 among under-60s, Swedish expert to tell committee
2 Ireland’s top earners ‘do not see themselves as rich’, study finds
3 Air travel never going ‘back to way it was’
4 What is wokefishing, the latest online dating deception?
5 Miriam Lord: Let’s call a spad a spad – this Government has woeful timing
Real news has value SUBSCRIBE