Finn McRedmond: Such art is not deserving of acclaim simply thanks to its tangible benefits 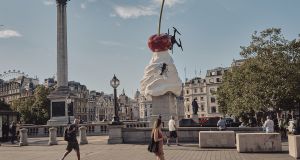 Heather Phillipson’s statue, The End, which was unveiled in Trafalgar Square, London, this July. The statue includes a working drone, which films the square below. Photograph: Tom Jamieson/The New York Times

In 1981 an almighty row was brewing between the art world and your so-called average New Yorker. American sculptor Richard Serra’s Tilted Arc – a 120ft long wall of rusted steel, sitting at a jaunty angle – was erected, cutting New York’s Federal Plaza in two.

Locals, office workers, politicians (you name it) immediately took offence at what they viewed as a giant, expensive, and haughty piece of rust unduly plonked in the middle of the pleasant open space. Meanwhile, art critics took a different view.

Then began the public hearings, with the New York Post casting the affair as a classic case of the snobbish and exclusive art world once again at odds with the average Joe’s better priorities. Tilted Arc’s fate was sealed – the sculpture was removed in 1988 and Federal Plaza returned to its barren state.

The Tilted Arc saga raises the obvious question: What is the point of public art if the public don’t like it? It seems self evident that it is insufficient for a piece to receive critical acclaim if the very people it is there to please find it to be a nuisance and a waste of money.

Making the case for public art, then, can be tricky. The two most common charges: it’s too expensive; and most of it is bad. The former is easier to deal with – of course art is not the priority for government spending, budgets are limited and art is at best a privilege not a necessity (fine, but then neither are libraries, playgrounds nor parks). Sometimes we spend money on things that are not the highest of priorities because balance is important and the function of the state is not to simply optimise capital efficiency with no view to granting lives with meaning and beauty.

The second charge is harder to deal with – a lot of public art is bad, or in the very least (as with the Tilted Wall), a lot of public art is disliked by the public. Our mind should be hastily drawn to Trafalgar Square’s infamous fourth plinth (a formerly empty plinth that is occupied with a different work of art every few years), and the sculpture that now inhabits it.

There is a lot to be said, too, for the unifying nature a terrible piece of public art can create

Sitting in the iconic square is a garish and gaudy assault on the senses – The End, by Heather Phillipson is a 31ft-high dollop of whipped cream, topped with a giant cherry, a fly and a drone. The cream hangs from the plinth as though it is melting in a heatwave, the result is gauche and grotesque. The addition of the “surveillance drone” comes with all the artistic subtlety of Banksy on speed. And the whole thing taken together is vulnerable to the worst charge of all: kitsch.

It was unveiled on July 30th and the public reaction has been as expected. It seems the most enthusiasm the average punter can muster is: “it’s not that bad!” A very low bar to clear for what should be a much celebrated asset to London’s capital.

But despite its multitude of failings, our cities are better off for having public art in them. You can reel off the technical arguments available for its importance with ease: it is an educational tool; it can act as a catalyst for economic regeneration; it engenders a sense of shared ownership and pride between members of a community. There are even some good examples, too (Anish Kapoor’s iconic Cloud Gate – more commonly known as The Bean in Chicago’s Millennium Park – or Anthony Gormley’s Angel of the North in Gateshead spring to mind).

Moreover, public art does not have to possess such staggering ambition or scale. The small instances are powerful also. Mothership, by Rachel Joynt, sits on the promenade between Dún Laoghaire and Sandycove. It is the shell of a sea urchin, 2m high, in cast bronze and stainless steel. You can peer through it, perfectly framing Sandycove beach and the James Joyce Martello tower.

But we should resist the inclination to reduce the value of public art to something of a mathematical formula, quantifiable and deserving of acclaim simply thanks to its tangible benefits.

When trying to convince people that there is such a thing as good and bad art, Alain de Botton wrote that if asked to prove why the skyline of Edinburgh is better than that of Frankfurt or Brisbane, “our answer will have to be a humanistic one ... why Shakespeare is better than the prose on a cereal packet, why it is good to be nice to small children, why forgiveness is better than anger”.

And so the same goes for the importance of celebrating public art – proving exactly why might be hard if you are talking to someone who refuses to be convinced by anything other than quantifiable benefit. But in every instance, even in the case of The End in Trafalgar Square or Tilted Wall from 1980s New York, our cities and communities are richer for their presence.

There is a lot to be said, too, for the unifying nature a terrible piece of public art can create: it is fun, every now and then, for the public to rally around something in mutual disdain.

1 ‘Insane’ gathering of hundreds of students in Galway condemned
2 Prepare for six to nine months of Covid-19 restraints, warn health officials
3 Do headstands, clear out a junk drawer, have sex: 15 ways to re-energise your day
4 Speed and distance of Covid-19 droplets tracked by Mater researchers
5 Sean Quinn stunned at rebranding of Quinn Industrial Holdings
Real news has value SUBSCRIBE