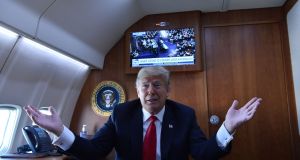 For many of us in America, it has been stunning to see how quickly President Trump and his administration are shattering the cultural norms of the world’s oldest and most powerful democracy. Photograph: Nicholas Kamm/AFP/Getty Images

All over the world, we are seeing the rise of authoritarianism that is rejecting the norms of democracy, freedom of the press and individual rights. In many countries, we are seeing leaders using political position for personal gain and watching the deliberate instigation of bigotry and intolerance toward the “other”. We are witnessing the undermining and imprisonment of public officials, opposition leaders and journalists. Russia, China, Hungary, Brazil and Saudi Arabia are only a few of the countries moving in this direction.

Most of us who live in democracies believe “it cannot happen here”. But, for many of us in America, it has been stunning to see how quickly President Trump and his administration are shattering the cultural norms of the world’s oldest and most powerful democracy.

All of this is not happening by accident. European and American right-wing factions are in close contact with each other, share tactics and goals, and are organised, led and sometimes even funded by some of the same people.

Democracies, such as ours, that assert equal protection under the law and government accountability to its citizens are foundational to a healthy and humane society, must comprehend the scope of the ultra-conservative movement if we are to effectively confront it.

We must not be satisfied with incremental, transactional change that makes little progress

These organised groups are actively tearing down a post-second World War global order and replacing it with autocratic leadership based on self-interest. Unfortunately, the establishment is defending the existing order and ignoring the fears and insecurities of the people that this outmoded status quo has wrought.

Neither is conducive to a positive future, as neither will provide what so many are asking for: simply put, a decent quality of life. If we are to prevail, we must clearly articulate a vision of shared prosperity, personal freedom, economic fairness and, most importantly, human dignity – the basic tenets of a vital democracy.

That means creating policies that effectively tackle economic, environmental, racial and social justice issues. We must not be satisfied with incremental, transactional change that makes little progress and carefully avoids affecting those in charge or offending their lobbyists and large donors.

We must fight for transformational change that shifts the balance of power back to ordinary citizens and makes a real difference in their lives. The United States and Ireland have each had recent successes in terms of individual rights and economic justice.

These victories were hard won by people standing up and fighting back together – the only way real change ever takes place. We need to build on these successes and expand our partnerships on both a local and global basis.

I believe democracy depends upon an educated populace

The issue of war and peace is central to this fight for democracy. The United States has long used “democracy” as a reason to wage regime-change wars which have resulted in serious “unforeseen” consequences – whether it was overthrowing Mosaddegh in Iran, Allende in Chile, Saddam Hussein in Iraq, or a whole range of clandestine operations, interventions all over the world.

Many of these military actions might not have taken place if the public had been educated about the issues, if those with different ideas and foresight had not been marginalised, if there had been a civil debate of ideas rather than a group-think acquiescence.

I’m an educator. And I believe democracy depends upon an educated populace. Some of the important elements of education – inclusive with respect to human rights, accessible regardless of economic status, and essential in preparation for global citizenship – are also some of the most important aspects of a strong democracy.

As we prepare our teachers, doctors, childcare workers, economists, lawyers and other professions for their chosen careers, we should also educate them for democracy. Perhaps we could learn from the Native American culture and cultivate a practice for our students – and our policymakers – of determining how today’s decisions will affect the next seven generations, impact the environment, and influence the growth and development of our children. Perhaps the media could assist by offering broader perspectives and fostering more debate on the facts, ethics and morality of particular stances regarding the economy, income inequality, budget policy and democratic principles in general.

In our schools and colleges, we need to put greater emphasis on economists working with students on global inequality and poverty. We need more scientists exploring the root causes of the planetary climate crisis and the necessity of sustainable development and renewable energies. We need greater focus in teacher-education programs on sharing the latest neuroscience discoveries and considering their implications for nurturing curiosity, creativity and confidence and cultivating a thirst for lifelong learning.

We need to set the bar higher for our elected officials, candidates, the media and ourselves

A consistent interdisciplinary approach could bring students in various fields together to work collaboratively, in teams, in respectful civil discourse. And, since we’re discussing democracy, there could be discussions about why policies that are best for the largest number of people, fairer for all, are – or are not – adopted in our nation’s capitals. Perhaps we could incorporate real-world case studies that review policies and actions not just from a what happened perspective, but why, what were the results, and how could we have done better?

Educating for global citizenship requires the ability to think critically, write clearly and communicate effectively. It requires media literacy and analysis. It requires an understanding of sustainable development, and the ability to identify and research complex issues. And it requires ethical behaviour.

Which brings me to our current electoral process. In today’s politics, the conventional wisdom is that it is no longer enough to defeat your opponent in a contest of ideas. According to the omnipresent highly paid consultants, the politics of today requires you to destroy them.

Negative television ads and mailings, paid for by special interests and large donors, bombard voters with reasons not to vote for this one or that one. The result is, they often decide not to vote – at all. We need to get money out of politics and, in the meantime, we need to not listen when money speaks. Don’t believe the negative messages. Demand that candidates give reasons to vote for them, not against their opponents.

In terms of civil discourse, we need to set the bar higher for our elected officials, candidates, the media and ourselves. We need to voice our opposition when we see the harsh, divisive and partisan rhetoric or the politics of personal destruction at work – regardless of whether we support or oppose the speaker or the target.

We can ask, and ask, and ask again that they all actively resist this coarsening of our culture whenever they observe it. We can let the candidates and the media know that we expect in-depth questions and answers about issues that affect our lives and that we expect them to engage in issue-oriented civil debate.

Dr Jane O’Meara Sanders is the Co-Founder of the Sanders Institute and currently serves as a Fellow. She will be appearing at the INY Festival on October 8th at 8pm at the Lime Tree Theater in Limerick