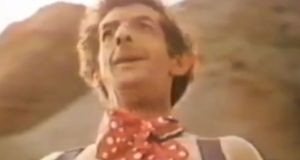 Ireland has produced many fine stage and screen actors and none more so than Jack MacGowran who was born 100 years ago on October 13th. On the stage, he became famous for his interpretation of Samuel Beckett’s characters, while on the screen, he appeared in four films that were nominated for the Oscar for Best Picture: The Quiet Man (1952), Tom Jones (1963), Doctor Zhivago (1965) and The Exorcist (1973).

He had “an astonishing presence and a beautifully modulated Irish voice”, according to one drama critic.

Born in Dublin, he worked for eight years as an insurance assessor before turning to acting as a profession, cutting his teeth as a member of the Abbey Players before moving to London to join the Royal Shakespeare Company in 1954. Although his stage and film careers overlapped, it might be clearer to treat them separately in this brief survey.

He had established a reputation for taking on playful, mischievous characters

His interpretations of the plays of Samuel Beckett won him renown and praise as a stage actor.

He established a close personal relationship with Beckett and was the playwright’s favourite actor. MacGowran’s biographer, Jordan R Young, argued that he changed forever the public perception of Beckett in that he helped the public to see that rather than Beckett being a messenger of despair, he was in fact a witty, humane and courageous writer.

MacGowran appeared as Lucky in Waiting for Godot at the Royal Court Theatre and in the first London production of Endgame with the Royal Shakespeare Company at the Aldwych Theatre. To coincide with Beckett’s 60th birthday in 1966, he released an LP record entitled MacGowran Speaking Beckett. A few years later, he won an Obie (Off-Broadway Theatre Award) for Best Performance by an Actor for his one-man show MacGowran in the Works of Beckett (also known as Beginning to End).

He also featured in a number of roles from the plays of another Dublin writer living in exile, Seán O’Casey, a standout performance being in the role of Joxer in the 1959 Broadway musical Juno, which was based on O’Casey’s 1924 play about the Irish Civil War, Juno and the Paycock. In fact, his last role was that of Fluther in The Plough and the Stars (with Siobhán McKenna) in New York in 1973.

His first film role was in No Resting Place (1951); little known nowadays, it was shot entirely in Wicklow. His appearance as Ignatius Feeney, the obsequious servant of the Squire (played by Victor McLaglen), in John Ford’s The Quiet Man (1952), introduced him to an international cinematic audience. He played Mickey J, a poitín maker, in another Ford film, The Rising of the Moon (1956). In Disney’s Darby O’Gill and the Little People (1959), he played Pádraig Óg, adjutant to King Brian of the leprechauns (played by Jimmy O’Dea).

By this time, he had established a reputation for taking on playful, mischievous characters, which helped him land the role of Partridge, the barber, in Tom Jones (1963), a British comedy-adventure film, which won four Academy Awards, including Best Film.

In London, he struck up a long-term friendship with fellow actor Peter O’Toole and both men had roles in Peter Brooks’s film Lord Jim (1965). He played the role of Petya, the stage driver, in David Lean’s famous 1965 film, Dr Zhivago.

There followed prominent roles for MacGowran in two Roman Polanski films, as a gangster in Cul-de-Sac (1966), a psychological comic-thriller, and as the mad Prof Abronsius, a vampire hunter, in the horror parody The Fearless Vampire Killers (1967), a role written especially for him. He had the lead role in the psychedelic oddity Wonderwall, the following year, where he again played a mad professor; the film is mainly remembered now for the theme music by George Harrison. MacGowran also had effective roles in the Australian film The Age of Consent (1969) and in the American comedy Start the Revolution Without Me (1970).

His last film role was in the very successful horror film, The Exorcist (1973), where he played an alcoholic director and Regan’s first victim, Burke Dennings.

He died in New York on January 31st, 1973, of a heart attack brought on by complications from influenza, which he had caught in London during a flu epidemic.

He had married Aileen Gloria Nugent, daughter of the former MP for South Westmeath and Irish Free State senator, Sir Walter Nugent, in 1963. Their daughter is the actor and director Tara MacGowran.

Jack MacGowran’s death at 54 meant that Ireland prematurely lost one of its most talented stage and film actors.