The Irish Times view on Galway 2020: time is running out 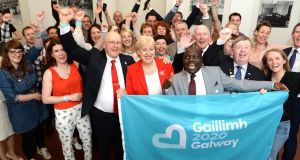 A file photograph from July 2016 shows the then minister for arts Heather Humphreys with members of the Galway team who won the European Capital of Culture for 2020. Photograph: Cyril Byrne

To suggest that Galway 2020 is “losing track”, as the project’s EU monitoring group has done, is an understatement. So far it has been characterised by negative reports of the resignations of key personnel and the decision by Druid Theatre Company to withdraw a major production from the European Capital of Culture programme.

Galway won the designation on the back of an imaginative and ambitious programme as well as its reputation as a city with a vibrant cultural life. The celebration that greeted the success of the bid in 2016 has now been soured by mounting disarray. In the intervening two years, instead of making progress, the initial vision has been overwhelmed by a series of setbacks including the loss of a chief executive and creative director as well as the increasingly vocal criticism coming from within the arts community. Reports of lack of confidence among the local business sector raise concerns about the ability of Galway 2020 to raise private sponsorship to match the significant State, EU and local authority funding.

The concern that funding targets may not be met can only hinder the creative ambitions which brought the designation to the city in the first place. The current guarantee of only half the projected €46 million cost is alarming and places a serious question mark over the artistic programme, which increasingly looks undeliverable. Already, cuts to budgets are putting Galway 2020’s artistic partners in an invidious position. While Minister for Culture Josepha Madigan continues to offer support, it would be unacceptable if the Government had to remedy this shortfall at a cost to arts funding in other quarters.

Galway is not the first culture capital, in Ireland and elsewhere, to land itself with problems at an early stage, but time is running out. The European Capital of Culture offers major regenerative opportunities – it can leave a permanent legacy through its impact on arts infrastructure and the local imagination. If Galway fails it will not only reflect badly on the city but be unfair to the competing Irish cities that put in strong bids.

1 Brendan Gleeson as Donald Trump: ‘A mediocre impression and possibly a great performance’
2 Aer Lingus staff say they are living in ‘near poverty’ and unable to cover rent
3 North Korea regrets killing South Korean ‘to control coronavirus’
4 Focus on cross-border movement as Donegal prepares for Level 3 restrictions
5 Coronavirus: Warning of similar measures for other counties as Donegal moves to Level 3
Real news has value SUBSCRIBE