This trial and sentence against democracy have made a solution within the Kingdom of Spain even more difficult to achieve.

A paraglider, sporting the Catalan flag, flies over a prison where nine Catalan leaders are being held. They were sentenced to prison terms of up to 13 years for sedition and other offenses after a failed independence bid in 2017. Video: Reuters 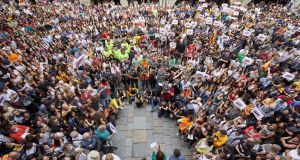 Thousands of people protest against the sentence ruled by Supreme Court on ‘proces’ trial’, in front of Generalitat local office in Gerona, Catalonia, 14 October 2019. The Spanish Supreme Court sentenced former Catalan Vice President Oriol Junqueras to 13 years in jail for sedition and misuse of public funds. Several other political leaders were also handed multi-year prison sentences for their roles in holding a failed independence vote in 2017. EPA/David Borrat

100 years locked away in prison. This is the Spanish Supreme Court’s sentence in the trial of nine former members of the Government of Catalonia, the former President of the Parliament of Catalonia and two grassroots leaders. 100 years for holding a referendum, which is not illegal in Spain under the Spanish Constitution; this was explicitly removed as a criminal offence from the Spanish Criminal Code in 2007. 100 years for exercising their rights in a civic, peaceful and democratic manner. 100 years for allowing people to vote, for conducting a debate in the Parliament of Catalonia and for standing up for their ideas. These people, my colleagues and friends, have been judged and sentenced for their political views in the 21st century. Furthermore, this has happened right at the heart of the European Union, a union based on fundamental rights and freedoms. This, of course, raises serious concerns about the very nature of democracy in Europe.

The outcome of the trial, condemning nine innocent people to prison, represents a historic error made by Spain. A mistake that, far from helping to make things better, only worsens the current state of affairs. The Government of Catalonia and Catalan society as a whole have always pursued a democratic solution to this political issue between Catalonia and Spain. The Spanish Government’s attempt to resolve the crisis through court orders and prison cells will never provide a solution to this problem. Sending political opponents to prison for between nine and 13 years each years is not a solution.

Dialogue is the only way forward; this is what we have been working towards all along and it is what the Parliament and international intermediaries around Europe have been asking for over the past few years.

Unlike the Government of Catalonia, [Spanish President] Pedro Sánchez has never tried to break this deadlock through dialogue. This has become even more obvious following the sentences demanded by both the State Prosecutor’s Office and the Spanish Attorney General’s Office, two bodies directly affiliated with the Spanish Government, at the start of the trial in February. Some thought that Sánchez’s premiership would de-escalate the conflict, but sadly, we have realised that Sánchez has neither the will nor capacity to move forward.

This trial and sentence against democracy have made a solution within the Kingdom of Spain even more difficult to achieve. The judicialisation of the issue inevitably projects this conflict to the rest of Europe, its institutions and its international courts. In this regard, it is vital that the international community takes on an active role in helping to resolve the conflict between Catalonia and Spain. In fact, the aftermath of the trial proves that this is no longer an internal affair of Spain; it is a European and global crisis. Either the world intervenes or the conflict will intensify and cause more trouble for those who clearly wish to avoid it.

The Government of Catalonia believes that there is a solution, but not through sheer force or the courts; through talks and ballots. It is possible and we will not stop pursuing it, because it is the only possible way forward. We appeal to the international community to speak up and to, once and for all, demand democratic and negotiated solutions. Fundamental rights are at stake in Europe and European democrats cannot remain silent. In the wake of these sentences, it is no longer possible to keep our mouths shut.

These nine innocent people do not belong in prison. Criminalising voting is never the answer, but rather the opposite. The citizens of Catalonia should be able to decide their own future by voting without fearing oppression. Democracy must prevail. The welfare of future generations depends on this, and not only in Catalonia or Spain. Europe, now it’s up to you.