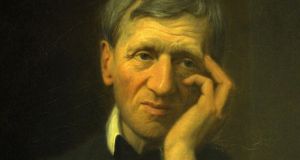 The canonisation of John Henry Newman this weekend will attract thousands of pilgrims to Rome and, belatedly, an official representative from UCD and the Irish Government.

Originally, a UCD spokesperson said that there would be no official representation. The reason given was that UCD has been a secular university since 1908 because the Catholic university Newman was invited to found never came to fruition.

The terrible pity is that it did not. Newman wanted a university that would treat students as whole human beings, help them to flourish and to be good citizens. Many universities are closer to conveyor belts delivering graduates to a gig economy where the employers have all the power.

Newman is sometimes caricatured as an ivory tower academic with no understanding of people’s need to make a living. While resolutely opposed to utilitarian education, he was far from indifferent to work. He wanted students to have a broad and deep education that would prepare them for any role. He believed that “a cultivated intellect, because it is a good in itself, brings with it a power and a grace to every work and occupation which it undertakes, and enables us to be more useful, and to a greater number.”

For example, the medical school was the most successful aspect of the fledgling Catholic University. Newman was not opposed to specialisation but believed it needed the balancing effect of a broader education.

He felt that it was essential that a university be residential so that students could mix with students from other disciplines, thereby avoiding narrowness in their knowledge and outlook. In short, he wanted people to learn to think.

The philosopher Alisdair MacIntyre agrees with Newman about the dangers of narrow specialisation. He gives the example of the 1997 collapse of the US hedge fund, Long Term Capital Management. For a short time, the collapse threatened the entire financial system.

Long Term Capital Management had two Nobel Prize-winning economists, who, as MacIntyre drily notes, were experts in mathematics and economic theory but lacked historical knowledge. So “they misinterpreted events in Russia and were taken wholly by surprise when the Russian government simply decided it would rather use its roubles to pay Russian workers than Western bondholders”.

This kind of disaster is the inevitable result of hubristic belief in the infallibility of one’s own speciality and an unwillingness to learn from other disciplines.

Newman believed that the process of interdisciplinary education must be guided by an overarching vision of education. For Newman, all knowledge formed an organic unity: and the way that the different disciplines should best learn from and relate to each other would necessarily be shaped by the answers to ultimate questions.

If the search for ultimate truth, which for Newman led directly to God, is not at the centre of the enterprise, then something else will be. At the risk of simplification, though not, I think, a gross distortion of Newman’s thought, if theology in the sense of inquiring after ultimate truth is not central to the university then something else will become an object of worship instead. It may be utilitarianism, consumerism, or a currently fashionable ideology – but there will always be something.

Newman’s Catholic University was in direct opposition to Sir Robert Peel’s Queen’s colleges. In Fr Michael Collins’s useful little book, Newman: A Short Biography, published by Messenger Publications, he outlines how some Irish bishops wanted education for Catholics for pragmatic reasons. Some may even have wondered why they should spend money on a university when the British government was willing to spend money on the Queen’s colleges instead.

Of course, the Queen’s colleges were far from neutral spaces, as their title reveals, no more than the 1831 scheme for Irish national schools was neutral.  These national schools were to provide secular primary education but were laden with imperial ideology. The aim of these allegedly neutral schools was to produce a happy British child, free from the influence of the Irish language, Irish history, heritage and games and the majority religion.

Truly neutral educational spaces do not exist. Universities are always teaching a world view. When a world view is not taught overtly, it will be taught covertly and in a way that is less open to being challenged and questioned.

It is a modern fallacy that having a vision of education like Newman’s must stifle debate and encourage conformity to a particular theological world view. In fact, a covert educational world view is much more likely to encourage thoughtless conformity. It is often a mark of an organisation confident of its own world view that it is able to engage with disagreement rather than silencing it.

Newman was not just an exquisite prose stylist and formidable intellect. He tried to bring a liberal, broad education to the Irish who did not really understand the value of what he was offering.

Furthermore, far from being an ivory tower elitist, as an elderly man he ministered patiently to the poor immigrant Irish in his care in Birmingham, thousands of whom lined the roads as his funeral cortege passed. UCD’s belated retreat from churlishness regarding their founder is to be welcomed.