Is the spin-over-substance meme beginning to stick to the Taoiseach?

Pat Leahy: If Leo Varadkar won’t define himself, his opponents will do it for him 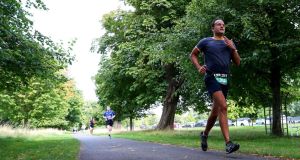 If you enjoyed the relative quietude of politics and politicians in recent weeks, sorry, but the holidays are over. Politicians were back at their desks this week, and the set pieces of the new political term will begin over the coming days. Sinn Féin meets for its think-in on Monday, with the other parties following in due course. The Cabinet meets on Wednesday after the August hiatus, but before that Fine Gael Ministers will gather on Tuesday for a political planning session. The requirement for “message discipline” – not saying things they’re not supposed to – will be impressed on them, I am told.

It is at this point that Mary Mitchell O’Connor, whose heretical thoughts on teachers’ pay annoyed her superiors no end, can be expected to stare hard at the table. But she is hardly the only one inclined to stray off the reservation. Two weeks ago Minister for Social Protection Regina Doherty told The Irish Times that pensioners would not be her priority in the budget.

1 Midlands lockdown could extend to other areas, warns Covid-19 team
2 Sand-hued cyclepaths changing the face of south Dublin coast
3 Midlands lockdown: ‘Why shut down Offaly and leave Dublin open?’
4 Meat plant clusters may be down to softly-softly approach
5 Midlands lockdown: Movement restrictions in place for residents of Kildare, Laois and Offaly
6 ‘Draconian’: TDs from across Midlands shocked and angered over lockdown
7 Coronavirus in Ireland: Four more deaths and 98 new cases reported
8 Warning of ‘economic meltdown’ in Kildare
9 Masks Q&A: Who has to wear them in shops and what happens if you don’t?
10 My dad the spy: Stewart Copeland on his father’s secret life as a CIA agent
11 Harry McGee: We are seeing the return of Straight-Talking Leo
12 Cambodia Bill to ban women wearing short skirts sparks outcry
13 ‘Saudi Arabia is where the opportunities will happen in future’
14 Masks to be worn in schools when 2m cannot be maintained
15 Cars to give way for Sandymount cycle path
16 Cliff Taylor: As we reawaken the economy, we find Sleeping Beauty has a hangover
17 Main points: What restrictions have been imposed on Kildare, Offaly and Laois?
18 Unholy war: Frank McNally on controversial memorials of a Dublin cathedral
19 Scientists uncover biological signatures of the worst Covid-19 cases
20 Pete Hamill obituary: New York newspaper editor who inspired ferocious loyalty
21 Scarlet for ya: Paul Mescal does classic Connell in The Rolling Stones’ new video
22 MSD buys Takeda biologics plant in Dunboyne
23 ‘I wandered around Dublin wondering: Is this what they call a capital city?’
24 Authorities urge mask wearing as coronavirus on the rebound in Europe
25 Catholic Church faces challenges as places of worship reopen
26 Covid-19 nonsense peddled by celebrities needs to be challenged
27 Real Madrid crash out to relentless Manchester City performance
28 Ten of the most mysterious aircraft disappearances
29 When Covid subsided, Israel reopened its schools. It didn’t go well
30 ‘Deep and urgent threat’: Martin defends midlands lockdown
31 Man accused of murdering Garda Colm Horkan unfit to attend court
32 Netflix’s 10 most watched movies – and what the list reveals
33 Facebook agrees Irish wind-farm deal with Brookfield in Tipperary
34 How a ship abandoned by its owner brought deadly cargo to Beirut
35 Nicola Sturgeon ‘furious’ as players’ pub trip sees Aberdeen game postponed
36 Trump signs executive orders banning TikTok and WeChat
37 Two men face fraud charges over £1.2bn sale of Nama’s NI loans
38 Science of kissing: why a kiss is not just a kiss
39 Food myths busted: Are coffee and salt so bad for us? Are calorie counts worthwhile?
40 Wifi problems? Quick tips to get your home internet out of the slow lane
Real news has value SUBSCRIBE