Cliff Taylor: How can we get Irish traffic out of this jam?

The upturn has brought traffic to a standstill. Big decisions are needed – fast 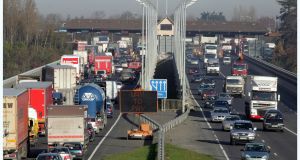 Maybe the M50 will just stop some day – and stay stopped. As an indicator of congestion in our capital city, it is flashing red. The busiest road in the country is reaching its limit – exceeding it already on many days. As in housing, areas of public transport, water and waste, our road infrastructure is showing signs of the big cutbacks in State investment during the economic crisis.

As one observer put it this week, congestion is going to be one of the political themes of the political term to come. And the difficulty for the Government is that there are no easy, or quick, answers and big questions about paying for it all.

The M50 is only one part of the congestion story, of course, but it is one that is easy to measure. Look at the traffic volumes between junctions 7 and 9 of the M50 – the exits for Galway and Cork/Limerick and Waterford – and you see a relentless squeeze.

It is the busiest stretch of road in the country. The total average daily volumes in August this year of just over 148,000 may be just 2.7 per cent ahead of the same month last year, but they are up 16 per cent on 2014. One day in April traffic on this stretch nearly reached 170,000. Total traffic on all sections of the road now exceeds 160,00 per day on average, in turn leading to more accidents and incidents.

For significant parts of the day, figures from Transport Infrastructure Ireland show that the M50 is seriously congested, or completely blocked up by accidents. Nor is this confined to Dublin, with the Cork South Ring Road another increasingly congested traffic spot.

Running to keep up

Ironically,the M50 was originally intended to take traffic away from the capital. The original Western Parkway, which opened to traffic in 1990, gradually expanded over the years – first to the north and later to the south. Since the turn of the century it has been a case of development and redevelopment, of running to try to keep up.

In 2007, the Dublin Tunnel took many of the HGVs off the M50. In 2010, a major redevelopment, involving rebuilding all the major functions from stop/go arrangements into free-flow and a widening of some sections, was finally completed. After years of delays caused by the roadworks, motorists rejoiced. The infamous Mad Cow junction was no more. And for a few years the sharp fall-off in traffic caused by the recession made it all manageable, most of the time anyway.

But since about 2014 economic growth has been strong. Slowly, but surely, the traffic jams came back, but this time there is nowhere to go, or certainly nowhere in terms of the M50 itself. A proposal to complete the ring around the city by joining up the Dublin Tunnel with an underground section out to Blackrock and then up to join the existing M50 at Sandyford never get off the ground. It would cost a packet and would be fiercely opposed by the residents of affected areas. A proposed new orbital road, farther out from the M50, has also been mooted, but would also be a mammoth and long-term task.

With road building constrained in the capital, the only short-term response is improving public transport, particularly buses, with plans by the National Transport Authority to roll out much wider use of segregated new bus lanes in the capital, new payment technology and new park-and-ride facilities. It estimates this would cost €1 billion. Rail and road investment takes time, but buses can deliver more quickly – and particularly if infrastructure for cyclists and walkers is developed alongside.

There are choices about where and when to invest. And here we get to the nub of it. The Government is working on a new long-term capital investment plan and a new national planning framework. Will these be real documents or more of the mix of wishful thinking and ad hoc-ery we have seen in the past?

We have unique issues. As a recent Ibec document pointed out, more than half of economic activity takes place in the greater Dublin region, but by European standards we still have a lot of people living outside major cities. The inevitable conclusion is that Dublin will get more congested, unless we both invest in the capital and also in spreading economic development around the country.

This will require decisions. Everyone wants a new bit of motorway, but figures show that seven out of every 10 miles of what we have built is operating at or below 80 per cent of its capacity. Maybe we would be better off fixing our crocked secondary roads?

Everyone – or at least all the big lobbies – wants Metro North built. But should the new bus network – the one way to make a quick difference – not get priority? In developing rural Ireland, is it better to pay for broadband, roads, or keeping railway lines that few people use open? Everywhere there are choices, not least in tackling perhaps the biggest congestion issue – the housing shortage.

We don’t have the money to pay for everything, nor the capacity to deliver it all at the same time.The risk is that the new capital investment plan is captured by local political interests and the usual big lobbies, and delayed by the interminable political inertia and planning processes we go through in this country. If we try to keep everyone happy, nothing will get done. This Government won’t be able to “ fix” congestion – but it can at least start to point a way forward.

1 Housing crisis: What the rest of the world can teach Ireland
2 Dublin house deaths: woman still being treated in hospital
3 A Ryan Tubridy interview takes a terrifying twist
4 Some get up early to go to the gym, others because they slept in a doorway
5 Brexit is a collective English mental breakdown
Real news has value SUBSCRIBE