Pat Leahy: Economic crash is neither forgiven nor forgotten 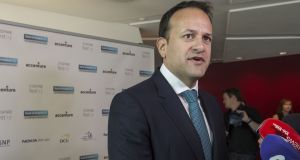 This week marks the end of an eventful political term, with the Cabinet holding its last meeting until after the August break on Wednesday.

Most politicians and senior civil servants will take a few weeks off, and large parts of the government apparatus effectively shut down for most of August.

With a budget to be concluded by mid-October, that’s hardly ideal. A Cabinet shutdown in July might make more sense (the weather tends to be better, too), with a Dáil return at the end of August. But in this, as in many other things, the system is set in its ways and resistant to change.

September has often been politically tricky for governments returning after a long break; Leo Varadkar and the lads (and it is almost all lads) would want to watch themselves.

Enda Kenny’s tone deaf “I’ve-got-my-mojo-back” last year reminded many of his own TDs that their re-election prospects would suffer as long as he was around.

Of the many disasters that confronted the government of Dr Brian Cowen (oh yeah: remember him?), some of the worst were inflicted on itself in September.

First in September 2008 (the bank run and subsequent guarantee) and then in September 2010 (the Galway drink-in, the exit from the borrowing markets, the slide towards the bailout). So when politicians come back from the August holidays, refreshed and relaxed, they should realise that September is a dangerous month.

As the machine of Government begins to turn its attention to the construction and agreement of the budget and the 10-year capital spending plan to follow, politicians will use the quiet weeks to take stock of the state of political and public opinion.

The first thing they will need when they come back will be a reliable read of where the political landscape currently sits, and some number-crunching will be inevitably taking place over the coming weeks to underpin that. I hear that both Fine Gael and Fianna Fáil have been cranking up some political research of late. This will underpin any autumn campaigns.

Taken in aggregate, the plethora of recent published polls suggests a few things. Fine Gael and Fianna Fáil are doing a bit better than they were, especially Fianna Fáil. Sinn Féin is doing much better than it did at the election, but about as well as it did before the election. There is no sign of a Labour revival.

You can’t really talk about the Independents and small parties as an homogenous group, but there are some indications that Independents as a whole will suffer. Their selling point as an anti-establishment alternative has been severely diminished by the fact that several of them are in government.

There may yet be a sustained Varadkar bounce but it is too early to say – partly, perhaps, because his message has been continuity rather than change. I suspect he may seek to redefine that in the autumn.

There is some bouncing around from month to month and poll to poll but generally the picture is relatively settled.

An election now would probably lead to the same sort of stalemate as the last time, with more Fine Gael and Fianna Fáil TDs, and fewer Independents. So the game of coalitionology will loom large in the election debate, whenever it comes. That may be why Micheál Martin was putting down those markers about Sinn Féin last weekend.

But there is another political dynamic present that could become very important, even though it is largely unappreciated by many politicians.

Talk to pollsters about the public mood that underpins the political choices of voters, though, and a more complex picture emerges. While political preferences haven’t shifted greatly since the general election, there is an enduring grumpiness among voters, an inchoate spikiness, a suspicion of and antipathy towards politics and politicians that remains as a legacy of the economic crash.

It is bubbling underneath the surface of public opinion and it means, I think, that while the picture is fairly settled for now, there is a latent volatility on the political landscape that could change the picture in the future.

The economic recovery has not dispelled this subterranean grumpiness. That’s because the recovery, though impressive and undeniable (as the Central Bank confirmed on Friday), is patchy and uneven and there are many people it has not reached.

Two pieces in The Irish Times during the week bore this out, and you wouldn’t have to be a genius to read the political implications.

On Tuesday, Fiona Reddan, citing the views of several economists, concluded that, “The bottom line is that only some people, in certain jobs, and certain sectors, in certain parts of the State, are benefiting from the recovery.”

On Friday, Jack Power wrote a revealing oped piece about how his millennial generation of twenty-thirtysomethings has lost faith with the economic and political structures whose failures have so constrained their opportunities.

The recession will continue to cast a long shadow over politics

Put these two together and add them to the enduring belief that the Irish and EU political and business elites failed catastrophically in the period before and during the economic crash, and the public mood is easier to comprehend.

Brian Cowen spoke during the week about how the EU had been beastly to Ireland during the crash. It’s not wrong just because Brian Cowen says it. He acknowledged the failures of his own administration, too. As if we needed reminding.

All the top-line economic indicators suggest the economy is through the recession and out the other side. But it will continue to cast a long shadow over politics. Many voters have neither forgiven nor forgotten.