Ireland has not applied the lessons of the economic crash

Cliff Taylor: We must start managing our economy in defensive mode and hold on to gains 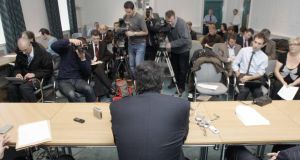 It is important to remember the night of the bank guarantee in 2008 and the enormous cost which was to eventually fall on to taxpayers as the banks were bailed out and on wider society as the economy crashed.

But it is more important to recall what got us there in the first place. And to remember one key lesson – just how quickly things can turn for a small, open economy. There is still a sense, a decade later, that we haven’t fully come to terms with this and that we are still trying to push the acceleration as close to as far as possible and then argue about how the spoils are shared out.

We have debated every corner of the argument of how things might have turned out if there had been no guarantee, or if it had been done differently, or if bondholders had been burned, Anglo let go bust, and on and on. But by the guarantee night, whatever was done, it was a choice between bad and worse: it was an exercise in damage limitation.

Nothing that was done on that night could have prevented a massive economic collapse, with all the terrible pain that entailed. We faced a public finance crisis and a banking collapse all rolled into one and an economic bubble which had been inflated to bursting point.

Things can turn upwards for us quickly, as well as downwards. Just as the collapse was astonishing, so the recovery has been impressive. We lost not far off one in five jobs in the economy during the crash – and now employment is back above pre-crash levels. In the dog days of 2011-2012, that simply would not have appeared possible. Between the end of 2012 when the jobs market turned and now, the total number of people at work has increased by an average of 1,000 a week.

Now the economy is steaming ahead again.While the latest Central Statistics Office figures show 9 per cent economic growth here in the first half of the year, this exaggerates the underlying momentum of the economy. Money shuffling by the multinationals is again distorting the data. But the underlying economy is probably growing by about 5 per cent, some 2½ times the European Union average. The Irish economy can’t seem to do ordinary, boring 3 per cent growth. It’s either a party or a hangover.

We talk about widening the tax base, but most people believe this means someone else should pay more

This has implications for the the budget, due in 10 days’ time. But it goes wider than that. Our economic model is based on pulling in foreign direct investment in good times and letting growth rip as fast as possible. We would never even consider edging up taxes or holding off on spending in good times to try to take the heat out of the economy and leave some financial leeway when things slow.

So what appear to be the inevitable swings in growth of a small, open economy are exaggerated by Government policy. For next year, even before the budget, Government spending is due to rise by €2.5 billion. Much of this is to pay for badly-needed investment, to be sure, but day-to-day spending is also rising sharply and there is talk of tax cuts.

We are doubling down on the bet on economic growth again, talking about adjusting the tax system to make it more attractive for people to return to Ireland to answer big emerging skills shortages. The problem is that we have nowhere for them to live. What’s the point of trying to attract more bankers to Dublin post-Brexit if this will only push up house prices yet further?

There are other lessons, too, from the boom times. We talk about widening the tax base, but most people believe this means someone else should pay more. The system is not exposed as it was in 2007-2008 to the property market. But it is reliant on a small number of very big companies and a few hundred thousand middle- and higher-income earners who pay the bulk of income tax and universal social charge. The actual broadening of the base has been limited to the local property tax – the future of which has still to be clarified – and a surge in corporation tax revenues, which we hope is sustainable.

And government spending was splashed out in the boom of the early 2000s, with too little attention to value for money. Now, in tighter times, delivery is again a big issue in areas such as housing and health.

We have had all the economic winds behind us with a strong international economy due to an upturn which has already gone on longer than expected and interest rates on the floor. Both of these could change – are likely to change – over the next couple of years. And then there is Brexit and the threat of a no-deal exit of the UK from the EU in March next year which could cause a nasty economic shock.

None of this is a cause for doom and gloom. But we need to learn to manage our economy in a defensive mode, answer the key investment needs and focus on holding on to the gains we have. There is a feeling, 10 years on from 2008, that our politics is still hard-wired into pushing growth as fast as possible, creating as many jobs as quickly as we can and then mediating on where the gains should go in terms of spending and tax.

This was entirely reasonable as we emerged from the dreadful crash and there was a priority on regaining ground. But with full employment, a housing crisis and Brexit looming, it is time to ease back on the accelerator.