Brexit Britain sets itself up to learn the hard way 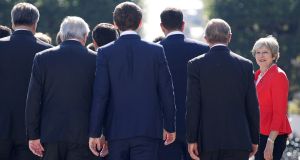 It was sadly appropriate that Denis Norden, the star of the British television show It’ll be Alright on the Night, died in the same week as the EU’s Salzburg summit took place. The working assumption of many in Britain has been that the Brexit negotiations will ultimately “be all right on the night”. The national philosophy of muddling through will prevail once again. After all, national humiliations and catastrophes only happen to people who are unfortunate enough to live on the other side of the Channel.

Salzburg delivered a serious blow to this kind of complacency. It is becoming increasingly clear that the Brexit negotiations could indeed fail. Both the EU and the UK are now talking seriously about the threat of “no deal”- with Britain simply crashing out of the EU in March.

Jeremy Hunt, Britain’s foreign secretary, has warned the EU not to misread the situation, by under-estimating Britain’s strength of will. But, in reality, it is the UK government that has consistently miscalculated during the Brexit negotiations - by over-estimating the strength of its hand.

If this persists, I fear that Britain is heading towards what counsellors call a “teachable moment”, otherwise known as a traumatic experience that forces people (or nations) into a fundamental reassessment.

The UK has experienced similar moments in the postwar period. The failed Suez invasion of 1956 was a mortification that underlined the fact that Britain was no longer an imperial power. Calling in the IMF in 1976 was a humiliating illustration of the UK’s economic weakness. A Brexit debacle could lead to another painful moment of realisation, highlighting the practical limitations on British national sovereignty.

The UK is not there yet. The current mood of defiance in Britain reminds me strongly of Greece, just after a referendum in which the Greek people voted to reject the terms of an EU bailout in 2015. I was in Athens after the referendum result came through, and talked to triumphant flag-waving voters who were proud that their nation had sent Brussels a rebellious message.

Even senior Greek politicians totally misread the strength of their own position. Euclid Tsakalotos, the finance minister, was spotted going into a post-referendum EU summit, clutching an aide-memoire saying “no triumphalism”. In fact, Greece experienced not triumph but humiliation - as its government was forced to accept the bailout that it had just rejected.

It is not just Greeks who are prone to hubris. Some of the British chest-beating suggests a failure to come to terms with the balance of power in these negotiations. As the Greeks discovered, being alone at the EU conference table is hard but it is not ultimately decisive. It is what happens in the streets and the financial markets that really demonstrates where power lies. For Greece, it was clear that the game was up when ATMs in Athens began to run out of cash because panicked customers were withdrawing their savings.

The great risk for the British government is that its determination to stand firm against the EU will be similarly undermined by fear in the markets, or among consumers as the reality of “no deal” sinks in.

The relative strength of Britain’s public finances and banks means that the UK is less vulnerable to a financial panic than Greece. But a “no-deal” Brexit would disrupt commerce across the Channel as new customs procedures and tariffs were imposed. Modern societies are dependent on just-in-time deliveries, so shops and factories would quickly face disruption of supplies.

Even the fear of disruption would raise the risk of panic-buying, leading to empty supermarket shelves. The government should certainly be studying the fuel crisis of 2000, where a blockade of petrol refineries by protesters led to panic-buying of fuel and food. Within days petrol stations had run dry and supermarkets were discussing rationing.

To some in Britain, an open discussion of these possibilities might seem like scaremongering, or even diplomatic sabotage. But one of the problems with the Brexit debate in the UK has been a consistent failure to consider how things might go wrong. As a result, the May government and the British public have been hit by a series of unpleasant surprises.

Of course, it is also possible that we are simply witnessing a bout of posturing, as both the EU and the UK flex their muscles, before the final summit at which they actually do the deal. It may indeed, ultimately, be “all right on the night”.

But it is clear things went badly wrong in Salzburg, and the differences between the UK and the EU look starker than ever. I happen to agree with some of the British government’s complaints about the inflexibility of the EU’s negotiating position. As my colleague Martin Sandbu has pointed out, the concept of the “integrity” of the European single market is fuzzier than Brussels theology currently proclaims.

But British complaints about the EU’s position on Brexit are likely to be no more effective than Greek complaints about austerity. Ultimately, this is not a debate about which side is “right”, but about where the power lies. And with Brexit day approaching and the threat rising of a no-deal, the weakness of Britain’s position is becoming ever clearer.

Gideon Rachman is an FT columnist

1 Restarting Ireland: When and how will we ‘get back to normal’?
2 What is Houseparty, the app everyone’s talking about – and not in a good way?
3 Tuberculosis vaccine ‘potential game-changer’ in Covid-19 fight
4 Mary Lou McDonald: This crisis shows that Sinn Féin was right
5 Coronavirus: Another 17 deaths and 331 new cases reported
Real news has value SUBSCRIBE