The three golden rules of Quangoland

Cliff Taylor: Quangoland is back in business 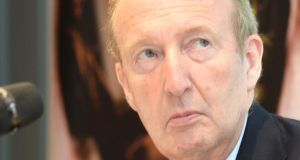 Minister for Transport Shane Ross says he has nothing to do with the National Transport Authority’s new bus plan. Photograph: Dara Mac Dónaill / The Irish Times

Sometimes you wonder what the Government and large parts of the civil service actually do. So much power and executive authority now rests in the hands of a bewildering array of agencies and bodies, providing some distance between the Minister of the day and what is meant to be the implementation of policy.

The latest episode is Minister for Transport Shane Ross saying he has nothing to do with the National Transport Authority’s new bus plan. This is an agency intended to implement his department’s policy and the board of which is appointed by him.

Remember promises before the 2011 general election from Fine Gael to “cull the quangos” and streamline government? This led to a modest attempt to get rid of a few agencies and merge a few others, yielding savings estimated in 2014 to amount to, at most, €24 million. By the last count at the end of 2015 there were, according to a study by the Institute of Public Administration, 257 quangos in operation.

The central civil service hasn’t the resources or expertise and, in many cases, local authorities don’t either

Now we have the housing crisis leading to the recent creation of the Land Development Agency. There is also the HSE – which had been due for abolition – being retooled with a new board and joined by a separate executive to implement the new Sláintecare programme, Quangoland is back in business.

Now it would be facetious to say a complex, modern state could operate without a significant number of agencies and bodies implementing policy. Think of the complexity of planning and building the new MetroLink, for example. Or running the health service. Or overseeing consumer protection in financial services. Or even, dare I mention, planning a 21st century waste and water system?

The central civil service hasn’t the resources or expertise for these tasks and, in many cases, local authorities don’t either.

And yes, I know Ministers and civil servants are busy – I just wonder have we really cracked the lines of accountability and action needed to actually get things done.

Agencies should never “go rogue” and do something that goes against Government policy, or takes a Minister unawares

There are, it seems to me, a few key quango rules that need to be followed.

Don’t pretend that establishing a quango is the magic way to fix something. The new Land Development Agency was greeted as a key way to free up State land and get new houses and apartments built in the years ahead. It may indeed be able to do useful work. But the State has owned all this land for years, Nama itself has had a significant land bank and precious little has been done.

Of course, our lapse into a bail-out and massive cuts in spending had something to do with this. But so too did a mindset of what to prioritise. Nama has been told, up to recently anyway, that its key job was to maximum its financial return or, to put it better, minimise the loss to the State from taking on all those dud loans from the banks. Rising land and house prices has suited the banks, in which the State is a major shareholder.

New agencies can achieve things, but it all comes down to the boring stuff of people making the right decisions and getting things done. Creating a new letterhead and putting a new name on the door doesn’t, in itself, make a difference.

Get on the same page. This seems obvious. Or it should. If the agency and the Minister aren’t pushing in the same direction, nothing much is going to happen. Exercises in finger-pointing inevitably follow. Nowhere has this been clearer than in the health service.

The relationship between successive ministers for health and the HSE, for example, has appeared frequently toxic and, as we head for another overspend on the health budget, probably in excess of €700 million, things aren’t looking too rosy at the moment either. And, in turn, this creates conflict between the Minister for Health and his Cabinet colleagues.

If the Government believes in the new Sláintecare plan, it has to back it – and make sure the HSE does too. Likewise, Ministers are either behind the NTA’s move to establish a new bus-route system in Dublin – or they decide to tell its board to do something else. They can’t have it every way.

Be prepared to take the flak. Shane Ross would not be the first to try to play both sides on an initiative taken by an agency. Even in the same area of transport, it was notable how members of Government and the Opposition combined in “horror” at parts of the proposed route of the Metro and particularly the threatened upheaval to GAA and soccer clubs in Dublin Central. Likewise, the public is surely tired of the annual finger-pointing between the Department of Health and the HSE about hospital queues.

Mr Ross, in relation to the bus controversy, says it was not his job to micro-manage. And this is true. But if Ministers appoint chairs and boards to agencies and have a proper flow of information and accountability, they – or their officials – should know what is going on and be able to benchmark it against stated Government policy.

Agencies should never “go rogue” and do something that goes against Government policy, or takes a Minister unawares.

Quangos are here to stay. We won’t be hearing any more about “culls” or streamlining. The pressure now is on the State to get involved, and delivery in key areas like health and housing – and transport – is crucially reliant on key agencies. The futures of Shane Ross, Simon Harris and Eoghan Murphy are in the hands of the quangos. Because the Government won’t be judged on fiddling around with taxes in the budget, it will be judged by its ability to get stuff done and here, as well as the usual challenges, time is the enemy.

1 Coronavirus: Varadkar returns to practising medicine to help during crisis
2 Donald Trump’s clown car administration has put the fear in all of us
3 Restarting Ireland: When and how will we ‘get back to normal’?
4 Irish doctors on getting Covid-19: ‘In 90 minutes, I deteriorated quite rapidly’
5 Genetics shed light on origins of Irish strains of Covid-19
Real news has value SUBSCRIBE