Unionist opposition to the Brexit deal is completely reasonable 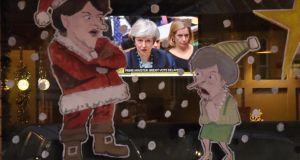 British prime minister Theresa May in a Commons debate shown on television in a Lisburn bar which has illustrations of May and DUP leader Arlene Foster on its front window. Photograph: Clodagh Kilcoyne/Reuters

In the past 10 days, Theresa May fended off a potential Conservative leadership contest, swatted aside Labour’s attempts to subject her to a vote of confidence in parliament and forced Jeremy Corbyn to deny that he called her a “stupid woman”. Allied to improving popularity ratings, it almost looks like a mini-revival for the British prime minister.

Ultimately, though, none of these small victories improves the prospects of the House of Commons passing May’s Brexit deal, nor can they disguise the fact that her government’s survival is more than ever dependent on the DUP.

In order to improve damaged relationships with Arlene Foster’s party, the prime minister promised Tory MPs that she would secure legal “assurances” from Brussels that the backstop will be temporary. At the European Council meeting last Thursday, European Union leaders quickly made it clear they would not endorse the changes she requires.

The DUP has infuriated its opponents by refusing to support May’s withdrawal agreement. Critics say that the unionist party won’t accept any compromise, that it simply doesn’t want a Brexit deal or that it is actively working toward a harder border in Ireland.

That is a misleading interpretation of the DUP’s position and it ignores everything its representatives have said about the border issue since the referendum on EU membership. More importantly, it relies upon a caricature of wider attitudes to Brexit among Northern Irish unionists, which are nowhere nearly as obstinate as commonly depicted.

The DUP has a reputation for intolerance and dogmatism that is often deserved, but its distaste for the backstop is shared by liberal unionists. Unionists care, for the most part, about fostering good relationships within Northern Ireland, across the island and further afield, but, by definition, they are most protective of their economic, social and political ties to the rest of the UK.

If the withdrawal agreement’s version of the backstop comes into force, Northern Ireland will be prevented from leaving the single market and the customs union with the rest of the UK. In order to ship goods into the North, companies from Great Britain will have to complete a customs declaration because, by law, they will be operating from a third country.

In the short term, the British government will be required to make sure that rules in the rest of the UK are harmonised with Northern Ireland, but future administrations will not be bound by this commitment. The regulations will be set by decision-makers in Brussels and Northern Irish voters will have no way of holding them to account, unless they turn to the Irish Government as an interlocutor.

There are arguments to justify each of these provisions, but it is disingenuous to insist that the backstop won’t seriously damage links between Northern Ireland and the rest of the UK.

Equally, it is commonly asserted that, because Britain voted for Brexit, then it must assume sole responsibility if its constitution is undermined. This logic shows startling disregard for the rights of nations to determine their own futures. Even the power of the EU rests, ultimately, upon the pooled sovereignty of its member states.

Unionists’ opposition to May’s agreement is not a hardline stance; it is based on rational and reasonable concerns.

It is not fair to assume that unionists, as a rule, don’t want a deal with the EU, or favour the hardest form of Brexit. Mainstream unionist parties contain advocates of nearly all the possible outcomes – from holding a second referendum, to a Norway-style relationship, to exiting immediately on World Trade Organisation terms. Most pro-Union people in Northern Ireland want a deal and they’re prepared to compromise, but, almost universally, they won’t accept being treated significantly differently from the rest of the UK.

Nobody denies that Northern Ireland is a place distinct from other parts of the UK. Ongoing disputes about identity, nationality and its constitutional status mean there are extra complications to negotiate as we leave the EU. Yet, the Belfast Agreement that established the current political settlement is based primarily on the “principle of consent”, which means that Northern Ireland must be treated as an integral part of the UK, until a border poll determines otherwise.

The Brexit referendum was a nationwide ballot and the nation’s citizens formed a single electorate. If Northern Ireland is prevented from leaving the EU on broadly the same terms as the rest of the UK, then its voters didn’t participate on the same basis as electors in Great Britain. If that is the case, then they don’t enjoy the same political rights and their British citizenship is qualified, at best, and second class, at worst.

There is, of course, a challenge to Northern Ireland’s constitutional position and many Irish citizens, north and south of the Border, reject the idea that unionists are entitled to participate fully in the economic, social and political life of the UK. They claim that their own national aspirations should take priority and that they’re based on sounder historical claims.

That is, at least, an honest argument and one that it is legitimate to make, even if it is also straightforward to refute. It is rather more devious and condescending to doubt the sincerity of unionists’ allegiance to the British state, or to suggest that they’re being irrational or even bigoted, if they try to oppose Northern Ireland being divided up from the rest of the UK.

Owen Polley is a writer and commentator

1 If you are young and live outside Dublin you could be in trouble
2 ‘Unseasonably’ windy weather set to buffet Ireland
3 Fintan O’Toole: Future of the American republic is in grave danger unless Trump is defeated
4 Taoiseach ‘disappointed’ he only learned of Barry Cowen’s driving ban on Friday
5 Ruth Negga: ‘People who say they don’t consider skin colour... are you f**king blind?’
Real news has value SUBSCRIBE