Imagine the ramifications had Irish become our first language

The Czech language revival succeeded whereas ours did not – why? 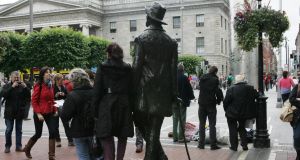 The statue of James Joyce off O’Connell Street. In a modern day Ireland where Irish writers in the English language would be seen as an unfortunate blip in a living literature 2,000 years old, where would Joyce fit in? Photograph: Cyril Byrne

I had the extremely disconcerting experience recently of sitting through an academic conference in Prague that was being conducted in two languages I don’t speak – Czech and Irish. Most of the people on the podium in the magnificent surroundings of the Strahof Monastery were Czech, and to my astonishment, seemed to speak fluent Irish, as they read and discussed translations from some of Ireland’s leading Irish-language writers.

Czech interest in Irish is not difficult to explain. Both are small countries who have been dominated by larger neighbours, both are countries where the native language almost died out. In the 17th century the Catholic Hapsburgs took control of Bohemia, driving out the Protestant elite, and imposing the German language on the Czech people. Like Ireland, the native language was kept alive mainly by peasants. Then came the long struggle for independence, and in the 19th century, the national revival. The first independent Czech republic was eventually founded in 1918, just a few years before our own. And in the Sudeten Germans, the country also had a large minority whose loyalties lay outside the state. But there is one crucial difference in our stories, inadvertently highlighted by the Czech-Irish academic conference: the Czech language revival succeeded, whereas ours did not, or only partially.

1 Mike Murphy: ‘I won’t do another over-70s lockdown’
2 Prof Sam McConkey: This is the beginning of the second Covid-19 wave in Ireland
3 The far right rises: Its growth as a political force in Ireland
4 Coronavirus: Public health experts considered moving Dublin to Level 4
5 Fintan O’Toole: It is June 24th, 2025 – and Brexit has worked
6 Blanchardstown, Tallaght top table for highest Covid-19 rates
7 President Higgins says British must face up to their history of reprisals
8 Coronavirus: Dublin to remain under Level 3 until October 10th - Taoiseach
9 Why are some in Fianna Fáil unhappy with Micheál Martin?
10 David McWilliams: Johnson’s UK and Milosevic’s Yugoslavia – spot the difference
11 Life in Level 3: What will happen under new restrictions in Dublin?
12 Aldi empire wracked by family feud
13 Born to ride, born to win: Sam Bennett, the making of a green machine
14 Wife not entitled to deceased husband's entire estate, High Court rules
15 Explainer: What the hell is going on with Brexit again?
16 Stephen Donnelly dodges the questions as Matt Cooper mercilessly pursues the answers
17 Removal of school profiling may have affected ‘accuracy’ of Leaving Cert results, study says
18 Ruth Bader Ginsburg, US supreme court judge, dies aged 87
19 Ross O’Carroll-Kelly: ‘They want us to vacate this place so they can use it as a love shack?’
20 Leinster look ready to step things up and burn off Saracens challenge
21 Covid-19: Garda presence in Dublin to be significantly increased
22 NPHET had weighed up measures to allow Dublin indoor dining continue
23 English ‘chumocracy’: Boozy weekends and class disdain with the Camerons
24 Let’s go outside: The why, how and where of getting outdoors, whatever the weather
25 The five lies we told ourselves about coronavirus
26 Miriam Lord: One Martin gets a ringing endorsement while another gets a cold call
27 Connors now delivering on his massive potential
28 Walkers concerned over plans to limit access to Luggala estate
29 Seán Moncrieff: Where am I from? I don’t know
30 Amal Clooney quits as UK envoy over Johnson’s Brexit bill
31 Keith Duggan: Surreal story of John Delaney needs to act as a wake-up call for FAI
32 Covid-19 is spreading most in deprived areas, the figures suggest
33 Covid-19 is ‘tearing at the guts’ of Irish in Australia. ‘We are trapped here’
34 Chuck Feeney’s $8bn giving-while-living odyssey comes to an end
35 Golf group insist they adhered to public health guidelines during Tullamore trip
36 Breda O’Brien: Why the class of 2020 should consider further education
37 Pat Smullen was as a ‘fighter’ who always did his best, funeral service told
38 The secret to an airy and light scone with a pillowy interior
39 Plant bulbs now to nourish bees and bring spring joy
40 Michael McDowell tells Seanad he has ‘no confidence’ in NPHET
Real news has value SUBSCRIBE