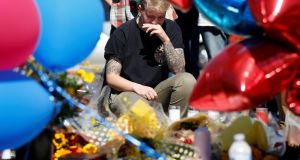 When is a terrorist not a terrorist? If you’re being shot at, if you’ve been wounded, if you’ve lost a loved one in a moment of psychotic viciousness, it doesn’t matter. Motivations are petty things when no possible motive can come close to justifying the annihilation of innocent lives. But how we talk about these things does matter because it has political consequences. And the atrocity in Las Vegas raises important questions about the language of terror and the politics of fear.

If Stephen Paddock, the gunman who killed 58 concertgoers and wounded hundreds more in 10 terrible minutes last Sunday night, had shouted “Allahu akbar!” through the door to his luxury suite in the Mandalay Bay casino, there is no doubt that he would be a “terrorist”. And much would have flowed from that. The claim by Islamic State that he was one of their operatives would have been repeated on every news bulletin, and even when – as is almost certainly the case- it turned out to be nothing more than an opportunistic lie, it would remain lodged in public consciousness. The slaughter would have apparent meaning. It would be subsumed into a pre-existing narrative, the “war on terror”. And things would be done in the name of the victims – their deaths would be used to justify alleged policy responses such as anti-Muslim travel bans.

And yet, the mere absence of those two words, or of any other slogan, changes everything. Instead of being a “terrorist”, Paddock is “very sick”. Instead of being part of a familiar story, he is a profound enigma. Instead of being a political threat that can and must be fought by any means necessary, his crimes are what Donald Trump called “pure evil”, an existential or spiritual wickedness of the kind that is always with us. Instead of demanding action, Paddock’s viciousness produces, in the Republican party and among many Americans, a sad sigh of resignation: these events are unfortunate but they are a price worth paying for the freedom to bear arms. Instead of being an assault on American freedom, Paddock’s accumulation of an arsenal of 47 firearms (23 of them in his hotel suite), is proof of that freedom in action.

In one sense, Paddock disproves the adage that if it looks like a duck, walks like a duck and quacks like a duck, it’s a duck. He behaved exactly as a capable terrorist would. He chose the time and place of maximum opportunity: an open-air concert and a 32nd floor window with a perfect line of sight. He knew how to use his scopes and tripods, how to fix his rifles with the “bump stocks” (perfectly legal and costing $99) that allowed many of them to function like machine guns. He installed cameras so he could be warned of any approach. He was cool, controlled, purposeful – not, as Trump claimed, “demented”. One can see why Islamic State would be glad to claim him as one of their own.

And yet, from everything we know, Paddock was not in any meaningful sense a terrorist. Terrorism is a political strategy. It aims to further a cause by doing at least one of three things: (a) to intimidate a particular part of a population into flight or submission; (b) to gain publicity and recruits for the cause through “armed propaganda”; (c) to provoke the enemy (usually a state) into a violent response that will reveal what the terrorists regard as its “true” face of oppression. There is no evidence that Paddock intended to do any of these things, any more than did Eric Harris and Dylan Klebold, who carried out the Columbine high school massacre in 1999, or Seung-Hui Cho, perpetrator of the Virginia Tech atrocity in 2007, or Adam Lanza who killed 20 little kids at Sandy Hook in 2012.

But does not being a terrorist make Paddock less of a threat to American society? Not at all. People who kill out of personal resentment, misanthropic anger, mental delusion or just for the fun of it are in general far more of a threat to Americans than terrorists are. Even in one-off massacres, they have the potential to cause catastrophic levels of casualties: Harris and Klebold at Columbine planted home-made propane bombs that, had they gone off, would have killed hundreds of students.

The difference lies in the politics of fear. It is quite rational for Americans to be conscious of the dangers of being killed in a mass shooting: there is an incident in which at least four people are shot on nine out of every 10 days in the US. And it is also quite rational for Americans to be afraid of terrorism, especially from Islamist and white supremacist groups – the threat is less severe but it is not negligible. The problem is that these reasonable fears are relentlessly manipulated to serve specific ends by talking up terrorism and talking down non-political violence.

One of these ends is to enrich the shareholders in a vastly profitable industry. Guns are an American consumer icon, as redolent of the country as Coca-Cola or Cadillacs. The US has 245 million adults and about 310 million guns in civilian hands. About half of all Americans grow up in a house where there’s a gun. Access to deadly force is more thoroughly normalised in the US than it is in anarchic societies such as Yemen. This mass consumption of the power to kill generates the money to influence the political system to ensure that the profits keeps flowing.

The other main end is to sustain a politically useful sense of Us and Them. People such as Paddock are very much part of the American Us – the frequency and deadliness of their deeds is itself one of the most distinctive things about the US. But terrorism, even when, as usual, it is home-grown, is imagined as foreign, outside, Them. Terrorism has thus become enormously effective as a way of displacing and channelling the fear of random mass violence generated by one arm of US consumer capitalism. The US has, to adapt Reginald Maudling’s infamous phrase, “an acceptable source of mass violence”.

Atrocities are tolerable when they are fed by a very profitable consumer industry and the fantasies of power it creates. They are intolerable only when ordinary fear morphs into its evil twin, terror. Motivations may not matter to the victims, but they allow their suffering to be either the sad but inevitable price of freedom or dangers to freedom that must be eradicated. They allow the meaning of the massacre to belong to those who can manipulate it.

1 How one couple’s weekend away resulted in 30 Covid-19 cases
2 Covid-19: College students on a break and middle-aged people in rural pub linked to large clusters
3 Netflix: 10 of the best new shows and films to watch in October
4 Taoiseach tells TD to ‘cop on’ over criticism of contact tracers asking about pubs
5 The Comey Rule review: You actually begin to root for Trump
Real news has value SUBSCRIBE