Men of 1916 had much in common with Bolsheviks

But October Revolution and Easter Rising had radically diverging ideologies 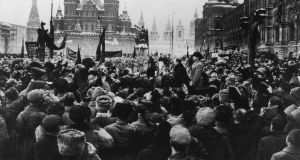 Prior to the October Revolution of October 25th, 1917 senior Bolsheviks discussed how to deal with the countless national groups under the Russian Empire. The incipient commissar for nationalities, Joseph Stalin, maintained: “It is unthinkable that we should acquiesce in the forcible keeping of any nation within the framework of any state.” If so, “we ourselves would be the continuers of tsarist policy”.

When Felix Dzerzhinsky, the future founder of the fearsome Bolshevik police, objected that separatist aspirations of the various nationalities were reactionary, Stalin replied: “But is not the fight of the Irish against the English revolutionary?”

In Ireland we often swing between delusional notions of our importance in world affairs and a sense that no one takes a blind bit of notice of what we do. Nonetheless, it is fair to say that just as the October Revolution caused the world to jolt upright, so did the 1916 Rising. Many around the globe, including Stalin, really did gaze in “deep amaze at those fearless but few” in the words of The Foggy Dew by Canon Charles O’Neill.

It is difficult to conceive of the rosary-wielding occupants of the GPO in April 1916 having much in common with atheist Bolsheviks, but both represented a revolt against an old order unravelling in the wake of the first World War. Each insurgency in its initial phase was also high on theatre.

It is revealing that more people were hurt in the making of Sergei Eisenstein’s epic film Ten Days in October 10 years later than during the storming of the Winter Palace, which turned into an almighty party once the tsar’s stocks of vintage wines were discovered.

Meanwhile, the men of 1916 were attracted to the symbolism of a Rising in the heart of Dublin, rather than the more sensible idea of hit-and-run tactics. The death toll of 500 was dwarfed by Irish fatalities during the European War in that same year. Posterity rarely displays balance in its affections, and national or revolutionary pantheons have little space for ordinary lives.

Nonetheless, both Patrick Pearse and the Bolshevik leader Vladimir Ilyich Lenin displayed an unwavering commitment to blood sacrifice. According to the historian Simon Sebag Montefiore, Lenin was always “eager to start the bloodletting”. The initial bacchanalia quickly gave way to the Russian Civil War, with a death toll of up to 10 million.

Clearly, Irish rebels diverged considerably from their Russian counterparts in terms of how they wished to reshape their respective societies. Kevin O’Higgins remarked: “We were probably the most conservative-minded revolutionaries that ever put through a revolution.” Even the Socialist leader James Connolly neglected the Marxist critique of religion when affirming his faith before facing the firing squad.

Nevertheless, in 1919 after the beginning of the War of Independence a member of the first Dáil Patrick MacCartan made overtures to the Soviet representatives in New York: “Ireland,” he said, is, “working directly and consciously towards an economic basis of governments, that is, towards an application of the Soviet principle.”

MacCartan visited war-torn Russia hoping to secure recognition of Irish independence, but unfortunately the Bolsheviks were at that time attempting to improve Anglo-Russian relations, and baulked at the prospect. Irish-Soviet relations were distinctly frosty henceforth, with the Soviet Union blocking Irish membership of the United Nations until 1955; embassies were only exchanged in 1973.

The October Revolution and the Easter Rising both, arguably, set in train the dissolution of the two largest empires the world has seen, but radically diverging ideologies animated the two movements, notwithstanding MacCartan’s naïve optimism.

The 1916 Rising was based on the ideal of a self-governing nation living within a defined territory, while the October Revolution was motivated by a desire to bring about a global revolution that would abolish capitalism, leading to a transnational communist utopia.

Both, however, bore contradictions that were never resolved. Communists in the words of another leader Nikolai Bukharin sought to bring about, “the manufacturing of communist man out of the human material of the capitalist age”. But the acceptance of extreme violence and totalitarian rule to engineer this transformation irredeemably discredited the movement.

Nationalism is also based on a faulty premise, that of a timeless collective ethnic identity – what Benedict Anderson described as an “imagined community” – based on either language, religion, or a nebulous concept of race. This does not fit with the complexity of most societies where two or more “national” groups often lay claim to the same territory, or the often competing identities that most of us hold.

The world is still haunted by the failure of these two ideologies – represented by the revolutionaries of the Easter Rising and the October Revolution – to develop lasting peace and equality. Ultimately, communist Russia, ironically under Stalin, would become “the continuers of tsarist policy”, while national identity remains a source of conflict.

Frank Armstrong is a writer and historian