Hungry Ghosts – Frank McNally on the Roman festival of Feralia 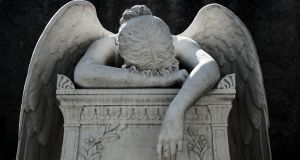 The poet Patrick Kavanagh had a curious expression for discouraging the revival of Irish, which he considered a lost cause.

The old language was dead, he preached: “We should not be bringing food to the graveyard.”

He may have been thinking of an ancient Roman festival that fell on this date, Feralia. Feralia was the last day of a nine-day event called parentalia, which as even those who never learned Latin would guess, was dedicated to the memory of parents, and ancestors in general.

But on Feralia, February 21st, people brought food and other gifts to the cemeteries, to honour the dead. The gifts didn’t have to be fancy, as another poet, Ovid, explained in verse: “A tile wreathed round with garlands offered is enough/A scattering of meal, and a few grains of salt/And bread soaked in wine, and loose violets.”

Many made it a more elaborate celebration, however, holding picnics among the graves and sharing in the food themselves. If they were wealthy enough, they equipped the family plot with stone benches for such purposes. The ruins of Pompeii have examples.

The ancient Romans liked to keep death at a safe distance, which is why they placed their cemeteries outside the city walls

Affectionate as these occasions could be, there was a pragmatic subtext. The departed had to be appeased in this way partly to ensure they didn’t return.

Ovid explained this too in a story about how Romans, distracted by war once, had forgotten the festival, with consequences that sound like a combination of the plague and Michael Jackson’s Thriller video: “It did not go unpunished: they say from that ominous day/Rome grew hot from funeral fires near the city./I scarcely believe it, but they say that ancestral spirits/Came moaning from their tombs in the still of night/And misshapen spirits, a bodiless throng, howled/Through the City streets, and through the broad fields.”

The ancient Romans liked to keep death at a safe distance, which is why they placed their cemeteries outside the city walls.

One of the most famous in modern Rome – often misnamed the “Protestant”, observes the tradition.

Officially the Cimitero Acattolico (non-Catholic), that’s a very picturesque and peaceful place: you could well enjoy a picnic among the gravestones of Shelley, Keats, and others. But Keats aside, it’s also renowned for cats, which are everywhere. Well-fed cats too. You might easily mistake them for the spirits of ancestors, nourished by centuries of the feralia, if you didn’t know there was an official cat-shelter nearby.

Ovid was back in the news this week in Britain, by the way. Or at least he featured in the debate about a proposal by Oxford university to demote his older Roman contemporary, Virgil, along with Greece’s Homer, from being a compulsory part of the classics syllabus.

Students could still opt to study their epic poems, Aeneid and Iliad, under the new plan, but the idea would be to remove the disadvantage from students who have not done Latin or Greek at secondary school.

Critics fear that this in turn would make the likes of Ovid, whose work is full of references to Virgil, less accessible. Some traditionalists will see it as part of a broader dumbing down that diminishes the understanding of literature and language generally.

Getting back to Kavanagh, a similar point sometimes featured in the early debate about reviving Irish. Leaving the language’s own virtues aside, it was argued that some knowledge of it was essential for understanding the English spoken here. And in fairness, the poet did support teaching it in connection with the origin of place names, at least.

I can’t recall whether Kavanagh spoke much Latin (his poor grasp of Latton, by contrast, is well known: it was while playing Latton O’Rahillys in a county final in 1931 that he infamously went missing from the Inniskeen goal long enough for the opposition to score in an empty net).

But a man who did his own bit to revive Irish, his friend Myles na gCopaleen, once had to berate him for bad English, in which a lack of Latin was implicated. Myles was a guest columnist on the short-lived Kavanagh Weekly newspaper of 1952. And as early as the second edition, he was lecturing the editor on two egregious spelling errors in the first.

One was “innoculate”, which as Myles pointed out, confused two Latin terms: oculus (meaning “eye”), from which – by a roundabout route – we get “inoculate”, with nocuus (meaning “harmful”), which gives us “innocuous”.

The other mistake was less complicated, if arguably worse. Kavanagh had allowed the old Roman concept of something being “portentous” to appear in print as “portentious”. Myles was sarcastic. “Speaking as a Dublin man”, he considered the error “tremendious”.

1 A letter to Ireland from Italy: this is what we know about your future
2 Tempers fray as coronavirus lockdown fatigue hits Italy and Spain
3 Coronavirus: New powers for gardaí expected to come into force
4 Covid-19: Critically ill Irish patients to take part in global clinical trial
5 Coronavirus: Notion of a rapid economic recovery is at best wishful thinking
Real news has value SUBSCRIBE