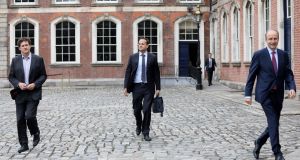 About a year ago, my now 13-year-old son made a comment that has stuck with me – and indeed shaped my ambitions for the rest of my career, however long that lasts. He told me that I had lived a good part of my life, but asked what would become of his, because of climate change.

Generational divides and inter-generational frictions have been perpetual features of political life. Socrates criticised teenagers for having bad manners and contempt for authority. If we fast-forward to America in the 1960s, then-gubernatorial candidate Ronald Reagan called for University of California, Berkeley administrators to respond to student protests by taking “the leaders by the scruff of their necks” and expelling them and instructing the rest to “do their homework”.

More recently, the Brexit vote in the UK, the Trump presidency, the student climate strikes, and the Black Lives Matters protests have shown that inter-generational political differences have not just remained in place, but perhaps have grown. Voters aged between 18 and 44 in the UK overwhelmingly supported Remain. In the 2016 presidential election, the majority of voters under 49 favoured Clinton, whereas the majority over 50 opted for Trump.

The process of forming a government in Ireland, which concluded this past weekend, also revealed internal party tensions along generational lines. The question for the new Government, and one which has eluded many other governments, is how to convince the young dissenters that those in power will respect and protect their interests. An even greater challenge for public officials is the formation of a cross-generational alliance, where generational divisions disappear within a collective effort to address shared problems, such as climate change. This challenge is particularly daunting because many younger voters preferred the parties now in opposition, most notably Sinn Féin.

Three recent Tasc reports confirm that younger generations in Ireland feel alienated from conventional politics and fear they will be asked to sacrifice their aspirations for the future – the second time around for millennials or Generation Y thirtysomethings. They do not believe education in the Republic does enough to reduce inequality in life chances, and they often feel political parties prioritise their own interests over those of their constituents.

How, then, can this new Government, faced with the pandemic, economic recession, and the possibility of a hard Brexit, reassure young people that they will have economic security and fulfilling careers and can live on a planet that in itself has a future?

A first suggested step will be to recognise the importance of creating a fair society, where education and training can indeed lead to decent work. Young people make up a disproportionate number of low-pay workers in Ireland. It is one thing if these jobs represent a temporary stage in a lifetime of work, but another if they become the norm. If sectors with high levels of low-pay jobs, such as retail and hospitality, have limited scope to recover, then the Government has a real chance to restructure the economy to create better jobs, either in established sectors with growing demand, such as care, or in evolving industries such as renewable energy and seaweed farming.

The Programme for Government does aim to create 200,000 jobs by 2025 but wants to do so by growing the tourism industry – where many of the low-paying jobs exist. The document mentions renewables and disruptive technologies as job creators. To ensure a better future for our younger generations, it would be far better, and more inspiring, to link investment in these sectors to quality of work.

Higher quality of work means more than a pay increase. The new Government also has to limit the use of temporary contracts, and certainly not rely upon them as a mechanism to soak up unemployment, especially among young people. An interviewee in one of the reports explained how lucky he felt that he landed a permanent job after finishing his PhD while his fellow graduates were moving from one temporary contract to another. Ignoring job insecurity is not the way to build trust and solidarity amongst a generation already feeling disenfranchised.

Third, the new Government should recognise that young people are not striving solely for individualistic goals, such as buying a house or having a family (which is becoming less appealing for some). They want the Government to show it is concerned with the public good, and will provide clearer opportunities and greater support for those burdened by low incomes. The Programme for Government promises to invest in public services and, in particular, to establish a citizens’ assembly on education. This latter initiative should be re-framed to ask how public services can strengthen social mobility and contribute to greater economic security. In fact, this security relates not just to low-income families, but also to young people who hesitate to see a GP or still rely upon their parents’ insurance or financial support.

Finally, and critically, this new Government needs explicitly to abandon the binary distinction between political moderation and radicalism. They are words that belong to another era, before the pandemic and the imminence of an altered environment. All we have now is pragmatism in order to survive. To woo younger – and older – generations, the new Government must not utilise references to familiar terms of social contract and wellbeing in order to hide the idealisation of balancing budgets and market-driven solutions to job growth.

Instead, the Government must be honest that all of our lives will necessarily change. To ensure that policy decisions do not further divide generations, the role of public officials must be both to ensure that climate action reduces inequality and to facilitate participatory democracy.

We will all need to be engaged, as we have been for months, in the policy decisions that will affect our lives.

Shana Cohen is the director of Tasc, the think tank for action on social change