The ‘understanding’ that Ministers represent their regions is a dangerous fiction 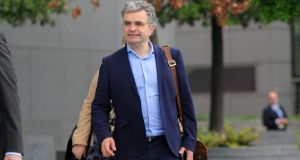 Fianna Fáil’s Dara Calleary is the new Chief Whip but he did not get a ministerial position. Photograph: Gareth Chaney/Collins

It’s a rare person who has not met with shocking disappointments in life but in fairness to Dara Calleary, it rarely happens in the public glare. Then again, in the words of a tearful old Munster rugby supporter scrambling for perspective after an agonising defeat, no cow died. Or as the newly minted Government Chief Whip himself put it on Monday, it was all “relatively minor” compared to the families who had lost people to Covid-19.

But for anyone tuning in late on Monday to RTÉ’s Six One report from Calleary’s heartland of Ballina, Co Mayo, the tone must have been alarming. Had something unspeakable befallen their well-loved new Cabinet member ?

“It’s a disaster for the west, not alone Ballina,” lamented a man in the town. “Just gutted. It’s beyond belief. He’s done so much for this town – put us back on the map,” wailed a woman.

“We’ve been handed a Cabinet fit for Cromwell,” roared the confusing headline in the Western People. (Wasn’t Connacht offered as a kind of reprieve for the luckless natives from east of the Shannon otherwise threatened with death by Cromwell?).

Such was the shock in Mayo that there were calls from local FF party members for the banishment of the barely installed Taoiseach. “The Government is a government for the whole country,” Micheál Martin said in slightly baffled tones in defence of his selection and – though he didn’t spell it out – of the Constitution.

But as RTÉ’s Micheál Lehane put it somewhat morosely on Six One: “One of the rules of Irish politics, it seems, is that it is understood in many ways that there would be a senior Minister somewhere within a particular region if not in the constituency or even a county within the region itself...”

This is certainly “understood”. Thus the outcry. The question though is not whether it’s a longstanding “rule” of Irish politics, but why. And what precisely is implied by this “understanding” between them and us ?

Nothing in the Constitution even hints at a cabinet of which members shall show particular regard for their old heartland, be vocal about it in cabinet and dole out special regional prizes because constituents think that’s what their man is there for.

In fact, it says something very different. Not only is there no regional basis to the cabinet in the Constitution, there’s not even an individual basis to it, says David Kenny, assistant professor of law in Trinity College law school. The cabinet is a single entity, as specified in article 28: “The Government shall meet and act as a collective authority and shall be collectively responsible for the Departments of State administered by the members of the Government.”

Every part of the State is represented in Leinster House, although that might not be evident in the current commentary

But look, we all know that real life isn’t like that. If Co Donegal is desperate, say, for a decent public transport infrastructure – which it is – whose job is it to represent that pressing need at the top table ? It’s easy for Dubliners to be sniffy about pork barrel politics beyond the Pale when much of the national conversation seems to revolve around the capital’s exciting public transport plans, eye-wateringly expensive centres of excellence and national palaces of culture and education, all culminating in the unsurprising allure of Dublin for foreign direct investment.

But this is an argument that that goes all the weary way back to the inadequacy of local government and the concentration of power in the hands of 15 cabinet stars behind whom 145 TDs make up the chorus line.

Every part of the State is represented in Leinster House, although that might not be evident in the current commentary. How the representatives meet this calling is another day’s work. The point is that their job is to be the centre of gravity in Dáil Éireann. Not many visitors would discern that in the order of things.

So where do we go from here ? Do we embark on the hard road of reform without fear or favour ? Or do we finally cave in, out loud, to the “understanding” that a Minister’s role is to represent his region and to the corollary of that “understanding” – that the cabinet is not there as a collective focused on national concerns but for members to look after their own?

Most people can see the problem there. Many will remember the righteous storm in 2012 when this newspaper reported that two locations in the Minister for health’s own constituency had been added by his department to a final HSE list of primary care centres.

I’m old enough to remember when Mayo had a taoiseach right there in the constituency and the constant refrain was that Enda Kenny had done nothing for his own place. This was despite headlines as “Christmas funding bonanza for Mayo”, carried in the Mayo News around Christmas 2012 above a report that €814,400 in funding had been committed to the county by the government “last weekend alone”. They should remember it too. It’s only eight years ago.

Imagine their dismay if they discover that Micheál Martin is planning similar bonanzas for his own Cork bailiwick?

1 Minister for Agriculture Barry Cowen sacked by Taoiseach
2 Miriam Lord: Martin blooded as Taoiseach after wielding axe on Cowen
3 Gardaí found naked man on a cross being whipped in Dublin club, court told
4 David McWilliams: ‘Ireland is three decisions away from being a perfect country’
5 My aunt never told us that Gran passed away with no will
Real news has value SUBSCRIBE