Five years since McMahon report and 7,700 still in direct provision

Some 4,000 could exit Direct Provision in a short period if new Government implements three mechanisms 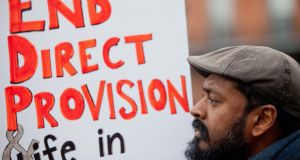 A man protests in 2017 at the Garden of Remembrance in Dublin calling for the end to the Direct Provision System. Pic Tom Honan.

Five years after publication of the first fundamental review of the the McMahon Report on direct provision there is unquestionable momentum for system change, especially in how protection applicants are accommodated.

The Working Group on the Protection Process was focused on reform. Implementation of the Working Group’s 173 recommendations has been piecemeal and incomplete.

The inconsistency in living conditions and standards between centres remains and was exacerbated during 2019 by recourse to unsuitable and costly emergency accommodation.

Undoubtedly the McMahon Report has informed policy since publication and there have been some notable improvements to the system in that period. In particular, the resolution of an estimated 2,000 long stay five year plus cases, the commencement of the Single Procedure, the development of National Accommodation Standards and the extension of the remit of the Ombudsman’s Office to Direct Provision.

Yet many key recommendations have only been partially implemented: communal catering is still only available to half of residents and additional living space has not been widely provided for families and individuals.

While the Government accepted the report, it never appointed an implementation body or adopted a clear implementation plan. Overall, the implementation process was uneven, delayed and at times only reluctantly undertaken. For example, the right to work was only realised after the Supreme Court intervention in 2018. Moreover, the recommended increases to the weekly allowances were only conceded in 2019.

The result of this neglect is a system now deemed by many not ‘fit for purpose’ to meet post McMahon Report challenges such as a national housing crisis and the Covid-19 outbreak.

The newly adopted programme for government, Our Shared Future, commits to “ending the Direct Provision system and will replace it with a new international protection accommodation policy centred on a not for profit approach.” The new Minister for Children, Disability, Equality and Integration, Roderic O’Gorman, recently cautioned Green Party members that it is not going to be easy as “there are 7,700 people who need to be provided with alternative accommodation”.

We have identified three mechanisms for system change: expedited long stayer scheme to achieve a twelve month case processing target; new model of accommodation provision based on a ‘distribution key’; and a holistic range of person centre supports from the moment of arrival.

As Direct Provision was designed for short stays of no more than six months and the stated Government goal is to deliver final decisions in twelve months, we deem long stayers as persons more than two years in the process. This group should now be fast-tracked through the system.

Such a new expedited long stayer scheme, using Working Group mechanisms, could eliminate backlogs. The aim would be to resolve the status of an estimated 2,750 two year plus cases over a six month period.

Other measures to achieve the twelve month processing target include enhanced access to early legal advice, improved IT systems to eliminate bureaucratic delays and better communication with applicants. Also, the effectiveness of any long stayer scheme is that it is delivered quickly and not at the expense of creating delays elsewhere; so the allocation, recruitment and retention of required case processing resources is vital.

The current model of accommodation provision is unsustainable. A new model derived from EU Resettlement Programmes should be developed. This would be local authority led, based around a ‘distribution key’ to ensure equal geographical distribution and underpinned by designated hub locations with sufficient population, economic strength and support services. Smaller towns could act as spokes receiving less protection applicants but linked to services centrally in hubs.

The new structure would be underpinned by an independent living model enabling protection applicants to have greater autonomy and effective control over their lives.

This approach would allow local authorities to manage community expectations and lead to equitable sharing of accommodation responsibility. The new housing responsibility for protection applicants would have to be balanced with existing responsibilities for vulnerable households and social housing needs locally. Clear communication will be very important to avoid frustration and tension between groups with competing housing needs.

Accommodation centres built on state land could act as a safety valve at times of large and unanticipated demand. Essentially, capacity added to state centres could act as a backstop long term for unanticipated large inflows or in the shorter term to facilitate the transition process from existing centres to the new local authority distribution model.

International resettlement experience demonstrates the benefits for protection applicants being welcomed in a communal setting for short initial periods. Newly arrived applicants should receive targeted reception and orientation supports through a one-stop-shop information and referral service and medical screening and vulnerability assessment to identify specialised needs.

To improve long term integration outcomes, the right to work should be provided as early as possible, in line with international best practice. Barriers, such as those relating to driving licenses and opening bank accounts should be removed.

Education is vital for the wellbeing of protection applicants. We would advocate allowing access to further education courses, at QQI Level 5 and 6, in line with the Working Group recommendation.

At the centre of the protection system are people. Individuals, children and families who have been forcibly displaced from their homes and crossed borders in search of protection. Each has a name, a face and a story. Each is deserving of having their protection claim processed fairly and speedily and to be received and accommodated with dignity while awaiting a final decision.

System changes require time and space to affect. Five years after the Working Group reported we have learned a roadmap is not enough - there needs to be an implementation plan and an adequately resourced implementing body to ensure system change committed to over the lifetime of this Government happens.