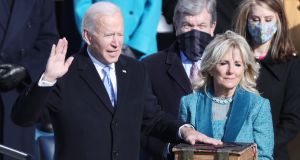 When Joe Biden named his fellow Irish American Marty Walsh as Secretary of Labor, he joked that the only downside of the appointment was that Walsh’s ancestors were from a different county than his. “They’re not from Mayo, they’re from Galway,” said Biden (who of course also has roots in Louth).

He must not have received the email from Gort yet. But I did this week, via Elaine Fahy, confirming that Galway can also now claim a share in the new US president, thanks to her 19th-century forebear Bridget Hanniffy, who was from Ballynacourty Hill, near Oranmore.

The link was reported in the Connacht Tribune in November but has been confirmed in a DNA test by Elaine’s aunt, Gort-based local historian Sister Mary De Lourdes Fahy. In a Christmas letter to the family, Sister Mary announced the exciting news that Biden was a “fifth cousin”. One of his great-great-great-grandfathers, on the paternal side, was a William Hanniffy, Bridget’s brother.

Already the town of Gort is talking about naming a square after the president. No doubt Oranmore, home of the original Galway Shawl, will want to wrap one of those around him too, if he visits.  And as our man in Washington, Dan Mulhall, could tell him, both are conveniently close to the Yeats Tower at Ballylee.

Ireland was playing a long game, clearly, when appointing the current ambassador to the US in 2017. The literature-loving Mulhall is well known presence on Twitter, in part for his regular poetry readings.  These were somewhat wasted on the outgoing president, but not on the new one. Like a benign, cultural version of the Manchurian Candidate, Mr Mulhall’s moment to strike has come.

President Biden may eventually be associated with as many different parts of Ireland as a seventh-century holy man, St Féchín, whose feast-day coincided with the inauguration. Although believed to have been born in Sligo and still synonymous with Fore in Westmeath, Féchín also has strong links with Galway, Mayo, and – just like Biden – Louth.

In spanning the country from west to east, vestiges of the saint’s influence suggest two different pronunciations of his name. On Omey Island in Connemara, there’s an old church called Templefeheen, which reflects the softer and more poetic Irish version.

But the saint’s middle consonant hardened as it crossed to the country, to become Termonfeckin in Louth. That lends itself to poetry too, but probably not the kind that Dan Mulhall or President Biden would want to be quoting. It may be just as well that the new president’s Louth relatives are confined (so far) to the Cooley peninsula.

The same saint provides both a role model and a cautionary tale for politicians. Although Féchín may itself have been a pet name, meaning “Little Raven”, he was also at one time called Mo-ecca, meaning “backslider”, from an incident during his early life when he was herding cattle for St Ciarán of Clonmacnoise.

Unhappy with his terms and conditions, he walked off the job one day. Persuaded to return, but standing on some point of principle, he would only do so by walking in reverse.

This ability to perform a U-turn while still facing forward remains useful in public life today.

But against that, there is also an event from the other end of the saint’s career, which may be a warning to political elites and those who serve them.

Circa AD 664, it seems, there was a great shortage of food in Ireland. That was sometimes a fatal problem for kings then.

In the wake of bad harvests, political leaders might be sacrificed to propitiate the gods and bring a change of luck. In this case, however, the joint high kings decided it would be preferable if some of the general population were sacrificed instead, to ease demand.

An act of God was the ideal way for this to happen. Thus, the kings prevailed upon the great churchmen of the time to pray for a plague that would usher a substantial number of the lower orders on to what, after all, was a better world, leaving this world less crowded.

Some of the holy men declined, it is said. Féchín was not one of them. And sure enough, the “pitiless prayers” he and the others offered brought the plague about. But when it came, it proved to be more democratic than planned.

According the Annals of the Four Masters, it also carried off a whole swath of the country’s saints, Féchín included.