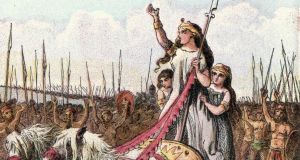 In June, the UK’s then Brexit secretary, David Davis, said: “Anyone who suggests that the United Kingdom cannot be trusted, and isn’t the proven friend of every single country in Europe, needs to brush up on their history.” Like former UK foreign secretary Boris Johnson in a Burmese temple, one cannot help but think of the words of Rudyard Kipling. “They are whimpering to and fro,” he lamented in his 1891 poem The English Flag, “what should they know of England who only England know?” Very little, it appears, as the pied pipers of Brexit have peddled a past that blinds Britain to reality. Politicians, public, and press need remedial history lessons before it’s too late.

The Brexiteers’ historical narrative begins by mangling the medieval. “The first Eurosceptic,” according to Tory Brexiteer Jacob Rees-Mogg, was the ninth-century Anglo-Saxon King Alfred the Great, who defeated the Norse ‘great heathen army’ in 865. Rees-Mogg likens the European Union to the Vikings, opposing a financial settlement with Brussels by quoting Kipling’s warning: “If once you have paid him the Danegeld, you never get rid of the Dane.”

The absurd anachronisms keep coming: the Guardian offers us Anglo-Danish “King Canute’s lessons for Brexit”, while MEP Daniel Hannan christens the Battle of Hastings “England’s Nakba” (the Arabic term for the Palestinian exodus of 1948), the beginning of centuries of “oppression” (of England, in case you’re confused).

The Norman conquest was “the last time we were invaded and taken over”, explained former Ukip leader Nigel Farage when wearing a Bayeux tapestry tie while campaigning, and to Rees-Mogg it is the only parallel for the “foreign rule” that would be a Brexit transition period.

Tory MP Michael Fabricant reaches back even further, hoping that prime minister Theresa May becomes “the new Boudica”, perhaps forgetting that the Celtic leader poisoned herself after her failed uprising against Roman rule.

Rees-Mogg sees May’s Chequers plan as “the greatest vassalage since King John paid homage to Phillip II at Le Goulet”, a bizarre reference to a short-lived treaty by which England accepted French sovereignty over territories in France. Medieval Britain’s fascinating complexities, and its political and cultural entanglements with the continent, are ignored in favour of flag-waving fantasy: The Daily Express declared the crusader knight – drawn from the European attempts to conquer the Holy Land – “the figurehead of the struggle to repatriate British sovereignty”.

In the 1970s, anti-immigration Eurosceptic Enoch Powell dated that (English) sovereignty to Henry VIII’s break with Rome, arguing that the modern history and character of “the British people . . . trace their unique quality from that moment”. Today the Reformation is rebranded “the first Brexit”, “Brexit 1534”, an event historian David Starkey calls “astonishingly similar” to today’s break with Brussels (let’s hope for fewer executions). Opinion writers in British newspapers tell us that “the Reformation sowed the seeds of Brexit” and should have been a “warning to Remainers”, as Brexit “recycles the defiant spirit” of sixteenth century Protestants.

Little attention is paid to the Reformation’s origin and focus on the continent, or to the fact that alongside the power politics was a profound spiritual and social upheaval that many believed to be a struggle against (or the work of) the Antichrist. But don’t worry about violent sectarian conflict or looming food shortages: “We survived our break from Europe then, and we’ll do so again,” reassures the Rev Giles Fraser in the Telegraph.

The Brexiteer narrative is an English story, in which cross-channel connections, Ireland and Scotland are conveniently ignored, and even where there was discord there are myths of harmony. A group of ‘historians for Brexit’ apparently do not think that even the civil war of the 1640s – a beheaded king; “the world turned upside down”; Cromwellian slaughter and dictatorship – derailed Britain’s “largely uninterrupted history since the middle ages”. Brexit is, Rees-Mogg intones, “a great liberation”, as worthy of celebration as “the Glorious Revolution” of 1688, though he probably doesn’t mean the Dutch king seizing the English throne with a massive fleet. It will be, Farage famously promised, “Independence Day”, raising eyebrows in the dozens of countries around the world that mark their freedom from British rule.

The empire, however, does not cause discomfort. After a visit to Amritsar – where British soldiers murdered hundreds of unarmed Indian demonstrators in 1919 – former prime minister David Cameron noted that in the history of the empire there was “an enormous amount to be proud of”. Polls show that Britons agree by a margin of three to one, and believe the former colonies are “better off” thanks to British imperialism. Civil servants dubbed Brexit trade strategy ‘Empire 2.0’ since its architects seem to believe the global operating system is simply in need of a British reboot.

Johnson has written that the problem for postcolonial societies is “not that we were once in charge, but that we are not in charge any more”. Violence, exploitation, racism and division defined British imperialism from Barbados to Bengal, Kenya to Canton, but such uncomfortable truths are dismissed as what Johnson’s Vote Leave colleague Michael Gove called “versions of the past designed to belittle Britain”.

While education secretary in Cameron’s government, Gove proposed reforms to school history curriculums that the historian Simon Schama scathingly described as “1066 and All That, but without the jokes”, referencing the 1930 parody of a nationalist history exemplified by Our Island Story (chosen by Cameron as his favourite children’s book). Gove backed down, but the past taught in British schools remains strikingly narrow, and public discourse is plagued by historical ignorance. Gove justified his support for leaving the EU by saying (without a hint of irony) that Britain’s history “showed the world what a free people could achieve if they were allowed to govern themselves”.

In the British mind, that history remains centred on the second World War, the ‘darkest’ and ‘finest’ hour in which Britain imagines it stood alone in defiance of Nazism, not as a global imperialist allied to emerging superpowers. Winston Churchill is omnipresent on screens and shelves – his support for a united Europe ignored – and the ‘spirit’ of Dunkirk and the blitz are staples of the tabloid press’s European coverage.

May has “gone into battle with the white flag fluttering over our leading tank,” complains Johnson as if the Brexit negotiations were a job for a British expeditionary force. While the horrors of war remind the UK’s continental neighbours of the need for co-operation, Britain’s war story feeds an adversarial view of the country’s place in the world.

From the beginning of the European project, British opposition has rested on Powell’s assertion that the defining feature of Britain – “and above all of England” – is its “separateness from the history of continental Europe”. Such nationalist exceptionalism has long been a vice of the left too: EEC membership was, Tony Benn told a cabinet meeting in 1975, “betraying, in a very special sense, our whole history”; Labour leader Jeremy Corbyn voted to leave in the referendum that year.

Superiority, antagonism and a fear of betrayal are not healthy historical lessons; instead they encourage Britain’s worst tendencies. “All the wrong people are cheering,” Dora Gaitskell told her husband Hugh – then Labour leader – of his 1961 declaration that joining the EEC would be “the end of a thousand years of history”. As our experience in Ireland shows, Europe offered not an end but a new beginning. By refusing to confront its complex and difficult history, Britain is turning its back on decades of shared progress, to the dismay of its friends. Britannia is adrift on the waves, and only by facing its past can it reclaim its future.