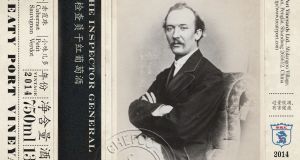 Sir Robert Hart, from Co Armagh, joined the British consular service in China, where he would live for 54 years

In the summer of 1900, hundreds of foreign diplomats and missionaries were besieged by the anti-western Boxer Rebellion in the Legation Quarter in Beijing.

For 55 days the “foreign devils” struggled to find food and survive under bombardment. Sir Robert Hart, from Co Armagh, was among them.

Hart is a central character in Besieged, a radio play written by Yorkshireman Chris Ruffle during the lockdown. Ruffle’s previous play, Before the Wall, set in the royal courts of Britain, China and France during the second Opium War in 1860, was performed at the Edinburgh Festival last summer.

Ruffle was awarded a first-class honours degree in Chinese at Oxford and spent 30 years in China as a metal trader and fund manager. Like Hart, he has devoted his life to commerce between China and the West, and to mediating their differences.

Ruffle first heard of Hart when he established Treaty Port Vineyards in rural China. He was so fascinated by Hart’s story that he named a vintage after him, and put Hart’s photo on the label.

Robert Hart was born in Portadown in 1835. An ancestor called Van Hardt had fought with William of Orange at the Battle of the Boyne in 1690. Hart’s father Henry managed a distillery. Young Robert studied for a time at Wesley College in Dublin, then won a scholarship to Queen’s College Belfast. His 77 volumes of correspondence are archived at Queen’s and at the School of Oriental and African Studies in London.

Hart earned a bachelor’s degree at age 18, and was sent by Queen’s College to join the British consular service in China, where he would live for 54 years.

Hart considered himself to be Irish, Ruffle says. “It comes through again and again in his correspondence, his taste in literature and music. He returned to Ireland to find a wife. When he made money, he purchased property his family once owned in Armagh.” In 1893, Hart became Baronet of Kilmoriarty.

Hart sought British permission to leave the consular service to become inspector general of Chinese customs for the Qing dynasty, a position he held for 45 years.

He felt the job required respectability, and asked his aunt in Belfast to find a bride for him.

He married Hester Bredon in Dublin in 1866.

The couple had three children, but life in Beijing was hard, and Hester stayed only a decade. Hart later expressed remorse for having set aside his concubine, Ayou, to marry. He eventually recognised the three children she bore him.

“Odd chap. Brilliant, no doubt, and terribly hard-working, but he has been here so long. I am not sure he is wholly on our side,” Sir Claude MacDonald, the British ambassador to Beijing says of Hart in Besieged.

“British merchants would come and say, ‘You’re one of us. You can do this.’ But no, he was very much on the side of the Chinese,” Ruffle says.

“The British said he’d gone native. I’ve been accused in those exact words in my career.”

Hart’s deft management of the customs service brought in a quarter of China’s revenue. A friend of dowager empress Cixi, he encouraged China to open embassies abroad, co-founded a foreign language school which became part of the University of Beijing, and established the Chinese postal service.

Hart foretold China’s role as factory to the world. “Wait a score of years and you’ll have China selling for a shilling with profit what it costs Europe half a crown to produce,” he wrote in 1901.

In July 1900, the London Times reported in error that the Europeans in the Legation Quarter had been massacred. Hart read his own obituary. He had “influence over the (Chinese) government which no foreigner had ever possessed,” it said. “All dogged perseverance, the shrewd intelligence, and business-like capacity of a typical Ulsterman.”

Rebels set fire to Hart’s house. He rescued his correspondence from the flames. Some 68 Europeans died in the siege of the Legations. The Boxer Rebellion ended when a western-led army of eight nations invaded, plundering Beijing and killing untold numbers of Chinese.

China was saddled with a huge debt for reparations, but Hart devised a tax on luxury items used by westerners in China which resulted in foreigners paying much of their own bill.

Ruffle is saddened by the current crisis in relations between China and the West, which he attributes to President Xi Jinping’s abandonment of Deng Xiaoping’s practice of collective leadership and subtle diplomacy.

“Hart’s life was a struggle to bridge the gap on both sides,” Ruffle says. Can the gap be bridged now? “Of course it can,” he laughs. “But at the moment, we’re not even trying. Neither side is trying.”