Hard Brexit will drive coach and horses through Belfast Agreement

Boris Johnson must decide whether he supports consensus or conflict 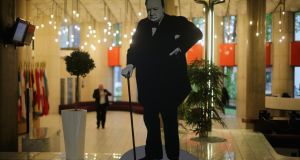 A life-size portrait of Winston Churchill in the European Parliament in Strasbourg: he was revered in Britain for saving his country but is remembered in Ireland as the initiator of the Black and Tans. Photograph: Christopher Furlong/Getty

On the morning of Good Friday 1998, I said to an exhausted Mo Mowlam that, whatever happened, no one could take away her contribution as secretary of state to any agreement that emerged that day in Belfast. She had connected in a way no one else could.

In different ways, the same could be said about Tony Blair, Bertie Ahern, David Trimble, John Hume, Seamus Mallon, Gerry Adams, Martin McGuinness – even though some of those on the list would dispute the right of others to be there, while others have an equal claim. This is Northern Ireland.

I would also say that John Major and Albert Reynolds, Garret FitzGerald and, even Margaret Thatcher belong on the list, as does Ian Paisley snr for his part in turning the agreement from concept to reality.

Each, in their way, contributed to a process by which a search for consensus rather than confrontation became the norm in Anglo-Irish relations and between the two traditions in Northern Ireland.

No more. The dynamic has been thrown in reverse. And, while the signs were already there, Brexit has thrown petrol on the fire.

The carefully constructed balance painfully established by successive leaders is looking precarious to say the least: the crystal vase is on its way to the polished floor. Will the current generation of leaders catch it or speed it on its way?

As Brexit has fanned disillusionment with the union in the North, there has been a distinct whiff of panic in the South

The first thing to recognise is the seriousness of the situation we face. This isn’t just an economic crisis, though given the number of jobs and livelihoods at stake it is certainly that.

It is also a fundamental political, cultural and social crisis which brings into question not just the relations between Britain and Ireland and the traditions in the North, but also democracy itself. It is existential in every way.

Northern Ireland isn’t a colony, but it is in danger of being treated as such if a policy opposed by a clear majority is imposed against its will – a policy which will drive a coach and horses through the two core principles of the agreement: the principle that Northern Ireland’s future will be decided by consent, not force or might; and the acceptance of difference, the right to be British, or Irish, or both. Democracy and pluralism in tandem.

Today’s generation of leaders – local and national – need to decide whether they still abide by those principles and they need to do so with actions, not pious words.

The paradox is that, while it is in each of their strategic interests to do so, their recent actions have not always recognised that.

The DUP’s strategic interest is in preserving the union, but political unionism is now in a minority, outnumbered by nationalists and the non-aligned. So, to preserve the union, the DUP has to persuade some nationalists and some non-aligned to vote with it. And yet, by supporting a hard Brexit, the DUP’s approach during the past three years has had the reverse effect.

Ian Paisley snr, eventually, recognised that Northern Ireland’s future was more secure within the union if there was consensus, not conflict. His successors need to return to that path, and be prepared to do what is necessary to persuade both nationalists and the non-aligned that their identities will be respected. That means making the Assembly work and ending the petty sectarianism and cronyism that brought it down.

The same applies to Sinn Féin. They too are in a minority. They too, therefore, need to win the support of the non-aligned and some moderate unionists to secure their strategic objective: unity. They will not do that by lecturing or hectoring. They need to be seen to be genuinely interested in seeking consensus. They need to show, as McGuinness did, that they are more than a party of protest. That means working the Assembly, and asking themselves whether sticking to abstentionism at Westminster is putting party purity before people’s jobs. So long as they aren’t prepared to face up to these difficult decisions it is hard to see them making enough ground to enter government in the Republic, as recent elections have confirmed.

But that need to move from rhetoric to reality isn’t restricted to Sinn Féin.

As Brexit has fanned disillusionment with the union in the North, there has been a distinct whiff of panic in the South. The truth is that while Dublin has shown an impressive degree of solidarity in facing Brexit, embarrassingly little thought has been given to what a new Ireland might look and feel like – and how it would accommodate unionism.

Article one of the agreement says that people would still have the right to identify as British even if the constitutional position changed. What does that mean in practice? And what happens in the rest of Ireland? Does it remain a highly centralised system, or become more devolved with power shifting to Cork, Galway and Belfast?

The discussion needs to begin now. It needs to be an open agenda and it needs to be an objective assessment of all aspects of the relationships between the two parts of Ireland, and between Ireland and Britain. It should not be predicated on one narrow outcome, or based on wishful thinking.

Key to that will be the centre ground in the North: the moderate unionist, nationalist and non-aligned who, along with civic society and the professional bodies, have found their voice during Brexit. They too face some hard choices in the here and now about how best to defend the principle of consent in any coming election. This is not the time to put party first.

And, finally, there is the British prime minister. Which does he support: consensus or conflict? Does he want to join the list of his predecessors who worked for the former to end the latter – or not?

Winston Churchill is rightly revered in Britain for saving his country, but he did so leading a government of national unity. In Ireland, he is also remembered as the initiator of the Black and Tans who, through their brutal efforts to stop independence, helped make it all the more inevitable and fed decades of bitter Anglo-Irish relations. You don’t always get to choose your legacy.

1 Susie Dent: ‘Jimmy Carr is incredibly rude to me. I took it as a compliment’
2 Coronavirus: Donnelly ‘cautiously optimistic’ about Dublin
3 My friends keep mocking my new boyfriend’s small penis
4 ‘Entirely wrong’ to remove pandemic payment from students, says Sinn Féin leader
5 Man with electric scooter who died in Meath was due to get married in the coming weeks
Real news has value SUBSCRIBE