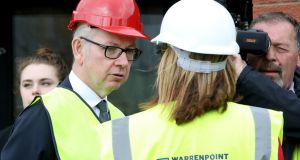 An agreement to avoid a no-deal Brexit is “eminently doable”, the British cabinet secretary Michael Gove insisted on a visit to the Border area of Northern Ireland.

Mr Gove however, on the first of a two-day visit to the North, repeated that the new British prime minister Boris Johnson was determined that the United Kingdom would quit the European Union by October 31st.

Mr Gove, who spoke to reporters on Friday during a visit to Warrenpoint Port, Co Down which would be adversely affected by a crash-out Brexit, repeated the British government’s opposition to a backstop designed to avoid a hard border.

Mr Gove said he understands the “analysis” as recently stated by Taoiseach Leo Varadkar, that even if there is a no-deal Brexit that lengthy negotiations then will have to begin on citizens’ rights, the Border and the UK’s financial settlement with the EU.

“But we want a deal, we believe that a deal is eminently doable. We have spelt out what we think is problematic with the backstop and why it needs to be removed,” he said.

Mr Gove was asked by The Irish Times was there room for compromise between the EU and Dublin’s insistence that the backstop must remain and Mr Johnson’s equally adamant stance that it must go. In particular, he was asked would Mr Johnson accept a time-limited backstop, as the DUP had previously urged as a compromise.

Mr Gove said, “The prime minister is keen to explore with European Union leaders how we can ensure that we can have a withdrawal agreement that will pass parliament. He has talked to leaders across the EU and he stands ready to talk during the course of the next couple of months to speak to any EU leader and to pursue with as much energy and openness as possible what alternative arrangements might be which would ensure we can secure a timely and orderly withdrawal from the EU.”

The minister, who is charged with preparing the UK’s exit from the EU, said he was not involved in negotiating any compromises. He repeated that Mr Johnson was earnest in his October 31st deadline.

“I think the message is learned clearly that the prime minister is not going to delay our exit and October 31st is a hard deadline,” said Mr Gove.

He added, “I think the fact that it is a different prime minister who has been unambiguous in making that commitment and who is prepared to devote the resources which are required to making sure that we are ready. I think the fact that we will see money being invested, infrastructure being strengthened and support for business being enhanced – all of that is a sign of the seriousness of intent.”

Asked how much the British government would spend on no-deal preparations before October 31st he replied, “Whatever it takes.”

He added, “We have also stressed that there is an absolutely cast-iron commitment not to have a hard border and not to have infrastructure at the Border.”

Mr Gove on Friday first visited the village of Middleton in Co Armagh close to the Monaghan Border. He was accompanied by Co-operation Ireland’s chief executive Peter Sheridan who has regularly warned of the dangers of a no-deal Brexit. After Warrenpoint the minister travelled to Stormont to meet senior civil servants. On Saturday he is meeting various people from business and civil society including the president of the Ulster Farmers’ Union Ivor Ferguson.

“I have acknowledged that there are particular sectors of agriculture that face particular challenge in the face of a no-deal Brexit. One of my jobs is to make sure that we can help agriculture and the food and drink sector whatever the circumstances after October 31st,“.

Mr Gove said his reason for visiting Northern Ireland was to provide reassurance. He said the British government will “make sure that the UK government will do everything possible to reduce, mitigate and if necessary remove any of the impediments to continued trade and increased prosperity for the future”.

Mr Gove said that “on a personal level I find it heartbreaking what happened to Harland & Wolff”. He did not make any commitments to support the shipyard, which has gone into administration, but that the government was developing a package called Operation Kingfisher designed to assist businesses who were temporarily affected by “changes of circumstance that are related to Brexit”.