UK prime minister Boris Johnson called on Germany and France to compromise on Brexit, cautioning that the United Kingdom would be ready to leave the European Union without a deal on Oct. 31 if necessary. Video: Reuters 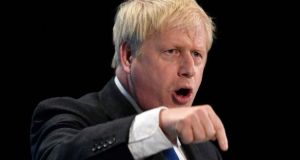 Boris Johnson is demanding that the backstop, the insurance policy to avoid a hard border, is abolished in order for there to be an orderly UK exit. Photograph: Neil Hall/EPA

British pro-Brexit MP Marcus Fysh has described leaked British government papers outlining the effects of a no-deal Brexit as the work of people who do not want Brexit to happen.

The documents, published by the Sunday Times warn of a hard Irish border, a three-month “meltdown” at ports and shortages of food and medicine if the UK leaves the EU without a deal.

Mr Fysh told RTÉ radio’s Today with Miriam O’Callaghan show that the report had been put together by the previous administration and that since then money had been made available to get ports ready. “Cross channel trade does not have to fall over.”

There is a need to ensure everyone involved in cross border trade is ready for Brexit, that they have the correct documents “so they can get across the border efficiently.”

He said that the documents had been “left in a pub for journalists to find. We know lots of people don’t want Brexit to happen. This is their last throw of the dice.”

Mr Fysh said he wanted to work with all the hauliers and traders in Ireland to ensure that the no-deal is a smooth experience for everyone.

On the same programme, the DUP’s Sammy Wilson said that the UK Treasurery department that had drawn up the report warning about Brexit, was the “most discredited arm of government.”

They had made inaccurate predictions in the past. “There is a war of words going on here. Some people are desperately trying to find a way to persuade people to back out by 31st October.

“Just because someone believes it doesn’t mean it’s true. They are blinded by their prejudice.

Also commenting on the documents, IBEC’s chief economist Gerard Brady said the Government should be planning for a no-deal Brexit by putting legislation and funding in place “no matter what the outcome”.

He said the Government will need to ensure the national investment plan is maintained because it will “prop up” the regional economy.

Companies that import from the UK will also be “badly impacted” as well as those who export, said Mr Brady.

Uncertainty about a no-deal Brexit will mean that businesses will cut investment which will stall growth, he warned.

But it will not just be businesses that will be impacted by a no-deal Brexit, he said. There will be a significant impact on householders.

There are also further threats in the global economy that will have an impact such as trade wars and the € 800million in business that will be exposed to tariffs threatened by US president Donald Trump, especially in the dairy and whiskey sectors.

“This is a very difficult and new situation that we’ve never been through before. For the indigenous sector this is new ground and it will be very bad. SMEs will also be affected by the uncertainty of new trading relationships.”

There will be pressure on cash flow for companies, and many will go out of business, said Mr Brady.

Minister of State for Public Procurement, Open Government and eGovernment, Patrick O’Donovan warned that a no-deal Brexit is not going to be good for either the UK or Ireland.

Even if contingency plans are in place there was never going to be a seamless transition, he told RTÉ radio’s Morning Ireland.

“We are looking at scenarios that protect Northern Ireland’s economy and the Good Friday Agreement. This is about protecting the peace process.”

Following the publication of the leaked documents, Michael Gove, the British Cabinet Minister who is responsible for no-deal preparation, said the document was “old” and Brexit planning had accelerated since Boris Johnson became prime minister in the UK. However, Mr O’Donovan said that the document was only a month old and was still relevant.

The Irish government is working with the European Commission on ways to cope with a no deal Brexit and the prospect of physical infrastructures, he added. Some people who might attempt to take advantage of such a situation “haven’t gone away” and there was a danger they could attempt “some warped campaign.”

The UK government is a co-guarantor of the Good Friday Agreement and as such have a responsibility to protect it, he added.

When asked about freedom of movement for EU citizens in the UK after 31st October, Mr O’Donovan pointed out that the Common Travel Area agreement between Ireland and the UK predates membership of the EU and therefore was still in place.

However, a seamless transition is “absolutely critical” he said. “There cannot be physical infrastructures along the border, “the day that they appear is the end of the peace process.”

The people on the border are the ones with the most to lose. “We have to make sure that Northern Ireland is protected. Peace trumps everything.”

The leaked documents were compiled this month by the UK cabinet office under the codename Operation Yellowhammer.

Fianna Fáil and Labour called on the Government to accelerate its own no-deal planning.

“Ministers have taken their foot off the pedal in terms of preparations for all Brexit outcomes and we are now playing catch up,”Fianna Fáil Brexit spokeswoman Lisa Chambers said, adding that the leaked documents “should act as a wake-up call to the very real possibility that the UK will crash out of the EU on October 31st and Ireland will be left reeling in the aftermath” .

Labour party leader Brendan Howlin said that the information in the leaked documents had been objective and was compiled by civil servants who had conducted a competent analysis.

“Operation Yellowhammer was not a single analysis in time. It was not from just one department. It was from the Cabinet office, drawn up by 56 civil servants.”

In regard to Irish government plans for a no-deal Brexit he said there needed to be a clear understanding of what resources will be available to the sectors that will be hit the most.

It was unfortunate that there was too much reliance on Dublin port and there should be more focus on ports like Rosslare, Foynes and Cork.

He said, “It is essential that the Irish Government accelerate no-deal planning. Central to these preparations and missing to date has been the level of material support available for Ireland from the EU.”

A Government spokeswoman said: “Intensive no-deal planning continues apace, as set out in the latest contingency plan published by the Government last month.”

Taoiseach Leo Varadkar is expected to speak to British prime minister Boris Johnson – who has promised the UK will leave the EU, deal or no deal, by October 31st – this week.

Mr Johnson is demanding that the backstop, the insurance policy to avoid a hard border, is abolished in order for there to be an orderly UK exit. He will also meet French president Emmanuel Macron and German chancellor Angela Merkel in the coming days.

The EU and Irish Government have consistently said the Brexit withdrawal agreement, which contains the backstop, will not be renegotiated.