Time to stand up for people in direct provision

We do not have to wait for a catastrophic story about an individual in direct provision. We know the system exists, and we know that the Irish government has the power to dismantle it 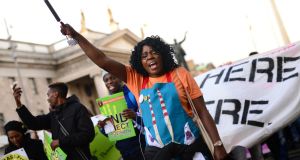 Ellie Kisyombe direct provision activist and the co-founder of Our Table at a United Against Racism rally and march last year calling for the end to the Direct Provision System. Photograph: Dara Mac Donaill / The Irish Times

This Saturday, November 18th, a national demonstration calling for the end of the direct provision - the controversial system by which the state directly meets asylum seekers basic needs of food and shelter rather than through full cash payments - will gather in Dublin at the Garden of Remembrance on Parnell Square at 2pm. We are constantly being told by politicians that Ireland is on the up, that we have turned the corner, that we are a republic of opportunity. Direct provision is a stain on Ireland’s conscience, and it has to end.

We do not have to wait for a catastrophic story about an individual in direct provision. We know the system exists, and we know that the Irish government has the power to dismantle that system, and implement a more humane way of efficiently processing the asylum claims of people who have fled their countries and come to Ireland seeking a better life. We don’t need to be reminded of the correlation between people who have come to Ireland, and the mass migration of Irish people as refugees from famine, and as economic migrants. The same successive governments that have dragged their heels - unforgivably - on direct provision, turn on those heels and advocate for undocumented Irish people in the US.

It is quite clear that there is no political urgency to end direct provision. The limited concessions on the right of asylum seekers to work agreed finally this month by cabinet prove the point.

All of us have a moral duty to put the issue on the political agenda, through protest, advocacy, and speaking to our local politicians and telling them that it matters to us.

Ellie Kisyombe is a direct provision activist and the co-founder of Our Table, a community non-profit that tries to affect change through conversation over food, rooted in the difficulties asylum seekers have with regards to catering in the direct provision system. “We don’t need reforms, we need to scrap the system,” Kisyombe says. “If government can implement the right to work, then they can push to abolish the system.”

The Mother and Baby Homes and Magdalene Laundries were hiding in plain sight for years. We knew they existed, we knew - in broad brushstrokes - what went on there. Direct Provision centres hide more successfully in our communities, towns and cities. Many of us are not aware of their locations. That makes their presence even more insidious. But we know that they’re there. We know this system exists. We can’t keep repeating the process of unjustly hiding people away. They are not less than. They are people just like us, with families and aspirations.

The longer government keeps direct provision, the more they are creating a dysfunctional community. People are mentally incapacitated and depressed. How is that community going to function in other communities? It’s not good for so many things. It’s not good for social welfare because it will become the norm that people depend on welfare. That is not a thing that anyone wants. People in direct provision want to pay tax, want to have normal lives.”

We are about to enter a period of the year where consumption and socialising is at its peak. Shopping centres, restaurants, high streets and bars will be packed with people spending money mostly on things no one really needs. And at the same time, adults in direct provision centres will be counting their punitive weekly allowance, which this year was increased - for the first time in 17 years - by €2.50 to €21.60 per week. Can you imagine living on that? Why are we inflicting this on people who have done nothing wrong?

1 Leaders’ debate: For one dramatic moment, the Taoiseach is like a rabbit in headlights
2 Chance of snow as Ireland set for cold snap from Sunday
3 Election 2020: Parties warned of ‘insane’ election promises as Varadkar offers Martin coalition
4 ‘I get paid to learn. I couldn’t recommend it enough’
5 A vegetarian and a non-drinker visit Ireland: here’s their verdict
Real news has value SUBSCRIBE