Even if the chancellor manages a final coup to secure a fourth term, we are entering the twilight of her politcal career 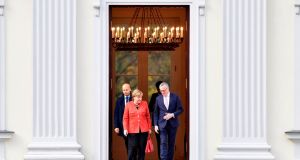 Germany is facing an unprecedented political crisis – and Europe a lengthy period of uncertainty – after coalition talks collapsed late on Sunday in Berlin. Dr Merkel takes her seat in the Bundestag as acting chancellor this morning with neither a majority for a fourth term nor the constitutional power to dissolve parliament and hold fresh elections.

Sunday’s drama concludes coalition talks that began badly almost five weeks ago, following the worst election result for Dr Merkel’s Christian Democrat Alliance since 1949. A swollen, seven-party parliament left Dr Merkel and her Bavarian allies with only one realistic option for power: to win over the liberal, pro-business Free Democrats (FDP) and the centre-left Green Party. Everyone knew the path to such a “Jamaica” coalition, so-called because party colours correspond to the island’s flag, would be problematic because of the huge ideological differences involved.

And so it proved, with negotiations dominated by rows on emotive issues from immigration to climate change. As several deadlines expired, the FDP walked out arguing that “no government is better than a weak government”. Its well-ordered – some say choreographed – retreat left would-be partners furious. They have accused the FDP of a calculated affront to boost its appeal ahead of a snap election.

Returning to the electorate is an unattractive option for Merkel, given the expense, effort and uncertainty, and the risk of a further boost for the far-right Alternative für Deutschland (AfD). But her other choices are almost as unappealing. A minority government or Irish-style confidence and supply arrangement would be anathema to the risk-averse German leader. Another option is to approach her last coalition partners, the Social Democratic Party (SPD), which insists it wants to regroup in opposition. But as her only hope, the party may be tempted to squeeze major concessions as their price for sharing power, possibly even Merkel’s head.

With markets spooked, the euro down and the world watching, German federal president Frank Walter Steinmeier reminded all parties yesterday of their responsibilities.

Even if Angela Merkel pulls off a final political coup to secure a fourth term, we are entering the twilight of her tenure as chancellor. Such a Kanzlerindämmerung is an appropriate final act for the Wagner-loving leader. But it leaves Europe in a holding pattern with French eurozone reform plans in abeyance and Berlin in lame duck mode in advance of December’s crucial Brexit summit.

There may be schadenfreude in some quarters at the political woes of the once invincible Merkel.But in these turbulent times, there is no underestimating the political blowback for Germany and beyond. Yet again, what once appeared certain can no longer be taken for granted.

4 How to clean your bed: ‘If you didn’t wash it for a year it would be 1kg heavier from dead skin’

5 Fintan O’Toole: If Davy cabal is not punished, we deserve the consequences