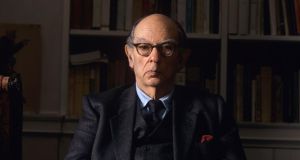 Isaiah Berlin: Experience of the Russian revolutions left him with a deep aversion to political systems that offer certainty in return for devotion. Photograph: Joe Partridge

The demands of corporation tax policy, crafting a budget or the vagaries of industrial relations require that any minister for finance be constantly alert to sources of guidance and insight. An unlikely inspiration for me are the writings of an Oxford philosopher who grew up in the throes of the Russian revolutions, Isaiah Berlin.

This month marks the 20th anniversary of his death. Like many philosophers, his reflections are now confined to the classroom or library. Now, when a jabbing finger or raising voice seems mandatory for political debate, his contribution should be important.

Amidst the jostling of Cabinet memorandums, policy papers, public debate and political demands, his reflections ring loud and true to me. Berlin’s advocacy for moderation, his acknowledgment of complexity and fiercely competing claims make him an unlikely seer for modern politics in an interdependent and volatile era.

I first encountered his essays as a young student of political theory. Unfairly, he then featured as a medium-sized footnote in most histories or studies of political philosophy. His choice of the essay as a favoured medium of communication and disdain for large systems of political thought counted against him.

This has changed. Writers such as Mark Lilla and Michael Ignatieff began a deserved and much-needed recognition of his work.

Born in Latvia in 1909, a Jewish subject of a Russian ruler, Berlin grew up in Petrograd. Experience of the Russian revolutions left him with a deep aversion to political systems that offer certainty in return for devotion.

He fled to Oxford, to a dazzling academic career. He was prolific, with more than 20 collections of his works now published. Great thinkers and the sweep of history are luminous presences in his essays.

The smouldering relevance of his thoughts has now ignited. At a time when the certainty of a political claim outweighs the weight of supporting evidence, his thoughts matter

In considering his work, my limitations as a reader are painfully acute. I have some understanding of some of the more famous thinkers that Berlin considers. But I am at an utter loss when he moves across a wider range of philosophers with humbling ease.

I have given up on some of those essays, his erudition overwhelming me. Others, particularly on political judgment and theory, are well-thumbed.

The smouldering relevance of his thoughts has now ignited. At a time when the certainty of a political claim outweighs the weight of supporting evidence, his thoughts matter.

This vitality is centred on his appreciation of and advocacy for the values and nuances of freedom and political pluralism.

Berlin warns of the burning attractions of dogma and sweeping grandeur of the simple solution. Instead he wrote that the “collision of values are the essence of what they are and what we are”.

But this lack of certainty is not a weakness of the political life of nations or democracies. The multiplicity of beliefs is a strength, a bedrock that should stand firm against “the search for perfection that does seem to me a recipe for bloodshed, no better even if it is demanded by the sincerest of idealists, the purest of heart”.

A visceral fear of totalitarianism made him a philosopher of freedom. He differentiated between two forms of liberty. A “negative” liberty is a freedom from constraint and coercion. “Positive” liberty is the freedom to “be an instrument of my own, not of other men’s, acts of will”. The latter is the ability to determine your own path, the former is the absence of obstacles on this path.

However, Berlin warns that conflict between these forms of liberty is likely. The attraction of positive liberty can be appropriated for collective and dangerous causes. The ambition to achieve all you determine can morph into a rejection of all limits and constraints. If such desires grasp societies, the consequences can be dangerous.

As human societies are inherently complex so are the choices that impact them. Berlin writes that “The concrete situation is almost everything.There is no escape, we must decide as we decide, moral risk cannot, at times, be avoided”.

This perspective was particularly relevant in the weeks leading up to the budget, a time of difficult choices.

Due to the breadth of his learning, his essays can be difficult. An elegant style sometimes lapses into florid prose. But his appreciation of the contingency of political order, his warnings against simple and certain claims and how liberty can falter in their advance make him relevant today.

President Michael D Higgins recently hailed the importance of “mind work”, the role of intellectual inquiry in scoping out a better future. Berlin has much to offer to this work.

So, where could a curious reader begin? The Pursuit of the Ideal and Political Judgment demonstrate his relevance. Two Concepts of Liberty and The Hedgehog and the Fox demonstrate his profound insight.

All of them are worthy of your time.

1 Housing crisis: Seven solutions to Ireland’s biggest problem
2 Miriam Lord: Does anyone care if Leo smoked or snorted?
3 Hilary Fannin: What I wish my spouse and I had done the morning of our wedding
4 Fresh delays and millions in extra costs for children’s hospital revealed
5 Asylum claims by Georgians and Albanians brought to abrupt halt
Real news has value SUBSCRIBE