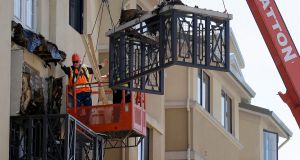 Workers remove part of a balcony that collapsed at the Library Gardens apartment complex in Berkeley, California in June 2015. Relatives of six college students who died when the balcony collapsed, have reached a settlement with the owners of the apartment building and the company that managed it. Photograph: Jeff Chiu/AP Photo

The loss of life and the life-changing nature of injuries to the survivors meant that civil actions arising from the Berkeley balcony collapse were always going to be difficult to resolve. It is almost two and a half years since six students, five from Dublin, were killed when the fourth-floor balcony they were standing on collapsed while they were celebrating a friend’s 21st birthday party on June 16th, 2015. Seven other visiting Irish students were seriously injured.

The families of the deceased and the survivors are still coping with what happened in the early hours of that morning in apartment 405 of the Library Gardens complex. A summer of promise and adventure on J-1 working visas in California, enjoyed by so many Irish for so many years before them, turned to trauma as families and friends responded to the emergency far from home.

Monday’s settlements of legal actions against the two biggest defendants – owner of the apartment complex Blackrock and manager of the property Greystar – came after two years of litigation. The process was, at times, brutal as students were subjected to a gruelling deposition process.

The glaring construction defects in the 10-year-old apartment block and the missed unambiguous warnings that the rotted balcony was a tragedy waiting to happen raised the stakes in these court actions. Teams of lawyers were brought in seeking to mitigate damages or push blame elsewhere. The plaintiffs were required to provide testimony of what they saw that night. One young Irish woman, whose three friends died in the fall, was four feet from the balcony. She described screams and “jaws dropping” inside the apartment when the deck collapsed, and a young man holding back others from the edge.

It is correct that the financial settlements with the families and survivors should be substantial. The losses are incalculable and the injured will require ongoing medical care.

The bigger victory is in the concessions won from Blackrock and Greystar. These two US corporations, which own and manage hundreds of thousands of apartments, have agreed to change their procedures so the balconies on their properties are inspected on a regular basis. If the firms had carried out routine, proper inspections at the Library Gardens complex, they might have spotted the rot that had destroyed the joists of the balcony on unit 405.

George and Jackie Donohoe, who lost their daughter Ashley and niece Olivia Burke in Berkeley, are pushing for further legislative changes in the US and their efforts are to be applauded. Improving building standards, inspections and the public reporting of claims over building defects are the least California lawmakers should deliver.

The changes are too little too late but if any good can come from this horrendous event, it is that something like it should never happen again.