Frank McNally: My sweaty weekend in the French revolutionary army 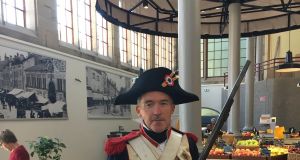 I found myself in France, in the home town of Humbert, being handed an 18th-century uniform and a gun, and invited to join the army

Your mother never warns you about the dangers of taking lapel pins from strangers. So when, at a previous Bastille Day party in Dublin, a Mayoman called Steve Dunford presented me with a little silver pike commemorating the 1798 rebellion, I accepted in all innocence. Then one thing led to another. And on this year’s July 14th, still with pike-pin, I found myself in France, in the home town of General Humbert, being handed an 18th-century uniform and a gun, and invited to join the army.

Compared with Steve and the other re-enactors of military history who had assembled, I was getting off lightly. They buy their own uniforms and weapons, at great expense. They are also martyrs to airport security, not to mention baggage charges. My ensemble, by contrast, was on loan from one of the French volunteers, and waiting at the hotel.

But getting off lightly did not extend to wearing it. It was 30-something degrees in France, so when I was first handed the uniform, my heart sank.

The rest of me sank when I put it on, starting with the knee-length shirt and breeches, then the sash, waistcoat, tunic, cravat, and after that the cross-belt with sword and bayonet, and the other belt with ammunition box, plus of course the bread-bag, also worn over the shoulder.

With my bicorne hat in place, I thought I was fully kitted. But no. An inspection by Michel, the uniform owner whose fiercely expressive body language made up for his lack of English, produced consternation.

I had forgotten my spats – quelle horreur! – which he had to fish out of one of the bags and button on for me himself.

An intensive five-minute training course later, I was deemed ready to be hidden in the second rank for the day’s manoeuvres. It was not a battle re-enactment – those can be genuinely dangerous and a neophyte like me wouldn’t be allowed near them. This was mostly just marching and standing to attention as part of Remiremont’s annual celebrations, which include the real army and emergency services. Even so, I’m still sweating at the memory.

They don’t know much in Remiremont about what we call the Year of the French. And what they do know is thanks to the likes of Steve, whose enthusiasm for the subject dates back at least to his teenage years, when he was in a band called General Humbert (whose members included a certain Mary Black).

General Dunford, as he is now known informally, was central to a major Franco-Irish reenactment in Mayo in 2013 and is hoping for an even bigger one next year.

He carries a seemingly inexhaustible supply of pike pins everywhere as recruitment tools. Judging by the number handed out in France, I predict a renewed invasion would get farther than Ballinamuck.

In the meantime, this being the 220th anniversary of ’98, we also marked Bastille weekend with an even sweatier Sunday morning march through the foothills of the Vosges mountains to General Humbert’s farm.

There we fired volleys in his honour and when our hosts sang the Marseillaise, we responded with an impromptu Amhrán na bhFiann. I can’t vouch for the singing, but Cécile Déjardin, the heroic Hibernophile Parisienne who had organised the weekend with military efficiency and who does know all the history, declared herself moved.

Of course, with the constant perspiration, as recommended by doctors, we were careful to rehydrate with local wines everywhere we went. Water too, if it was available. But after a weekend of intense soldiering, some of us were still thirsty when we got back to Remiremont late on Sunday.

France had just won the World Cup, so we expected a party. And a party there was until about midnight, when the bars all shut because, World Cup or no World Cup, French people have to get up early in the morning.

Unable to believe this situation, we wandered the empty streets a while, searching for life. Then we saw a group of locals getting into a car. They were party animals, clearly – the passengers had pints of beer for the journey home – and would know where we should go.

Alas, they could only confirm the curfew. So we told them about our weekend (they’d never heard of Humbert either). Then Steve conferred them with pike pins.

After that they drove home, leaving us to raise a toast to Franco-Irish relations, something we were able to do because, in the spirit of fraternité, they had given us their beers.