Fintan O’Toole: The second World War will finally end in 2019

In the US and Britain, 2019 may see disenchantment with the reactionary nature of 2016 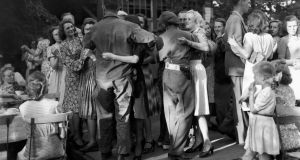 1945: British and American soldiers dancing with German girls in a Berlin street cafe only days after the fraternisation ban was lifted at the end of the second World War II. Photograph: Getty Images

At some point in 2019, British troops will withdraw from Germany. This has nothing to do with Brexit. The British Army announced in 2015 that over the course of 2019, its remaining field army units will return home from their bases in Paderborn, Sennelager, Bielefeld and Gütersloh.

The so-called British Forces Germany headquarters will shut up shop, leaving only a small number of specialists to work with their German counterparts.

The moment will be poignant: the second World War will be over and the same, in one sense, will be true of the Cold War. These bases were established in 1945 by the invading British Army of the Rhine and became semi-permanent during the long stand-off with the Soviet Union.

In itself, this withdrawal may be of minimal significance – certainly when compared with the prospect of a much larger British withdrawal from Europe. But it reminds us of the very long afterlife of the catastrophic wars of the first half of the 20th century.

In 1919, Europe, the United States and the British Empire imagined they were entering a post-war world. In 2019, we could all say the same, but not with any great joy. It is not just that we know from a century ago that “post-war” can turn into “inter-war”. It is that we actually need the memory of those wars to stay alive. They are still the best warnings we have about our collective capacity to manufacture catastrophe.

Politically speaking, the two most powerful words in the English language in recent years have been “back” and “again”: Take Back Control; Make America Great Again. Yet the projects associated with these words – Brexit and Donald Trump’s presidency – have been marked by a profound ignorance of history. They evoke the past as an idyll to which the people can return.

There was, allegedly a Britain that once stood alone and controlled its own destiny. Not so, of course – at no point since Britain was formed in 1707 has it ever not been part of a much larger political and economic entity, Empire first, then the EU. There was, allegedly, a past in which America was “great” – a simple concept that suppresses the history of slavery and racial oppression and of disastrous neo-imperial adventures like the Vietnam War.

Yet “back” and “again” are not in themselves the wrong words. Even as we look forward to 2019, we must survey a political landscape in which it is broadly true that if we do not go back to the searing memories of modern history, we may have to endure it all again.

The paradox of our time is that because we forget the past, we are in some ways slipping back into it. We forget that we have had gilded ages before in which the super-rich were able to think of themselves as a separate species of humanity. We forget that we have created environmental disasters before and that they have led civilisations to collapse.

We forget that we have seen demagogues ride to power on the promise of protecting Us from Them and that they have led both Us and Them to disaster. We forget that we have, in the first World War, for example, allowed our technology to far outrun our moral capacity to control it. And so we are in the midst of all of these things again.

In 2019, as in every recent year, there will be a lot at stake. The Brexit project will have to take some kind of shape very early in the year. The extraordinary indulgence in time-wasting has run out of road, and both relatively benign (a second referendum) and utterly malign (no deal) scenarios remain as live possibilities.

In the United States, the Mueller inquiry will have to report its findings on the depth or otherwise of collusion between Trump’s campaign and Vladimir Putin’s Russia. If Trump, in response, escalates his trade war with China, there could be severe global implications.

In the EU, the elections to the European Parliament in May will be arguably the most important in the history of the EU. If the far right continues its recent advances with an anti-EU, anti-immigrant nationalist agenda, the repercussions for the whole European project could be huge.

If the implementation programme for action on climate change agreed in December at Katowice – itself widely regarded as insufficient – does not take rapid hold, the chances of environmental catastrophe will continue to rise.

A lot will depend on “back” and “again”. What is the alternative to a reactionary and destructive use of these words? Many in Europe and the US see the alternative as just going back again to the way things were before Brexit, before Trump, before the rise of the far right.

Let’s pretend that none of it ever happened. Let’s see these phenomena as essentially freakish aberrations, temporary flaws in the pattern of a neoliberal global norm. In the case of both Brexit and Trump, this approach is superficially tempting because the chances are that in 2019 both of those projects will be undermined by the flaws that were present at their moments of triumph in 2016 – Brexit’s false promises; Trump’s very real Putinism.

At a stretch, the same case could be made even in the EU – the corruption and incompetence of the far right becomes even more visible as it gains more power, so perhaps it will destroy itself.

But hoping that the reactionary projects blow themselves up and that the people who supported them come to their senses and go back to believing in the old status quo is delusional. The old status quo, as it existed roughly between the end of the Cold War and the great banking collapse of 2008, was unsustainable. It created economic inequalities incompatible with democracy; it fed a feral form of casino capitalism that was inherently unstable; and it could not deal with the great challenge of climate change.

So “back” and “again” has to mean instead a return to the memories of disaster and to the egalitarian values and serious governance that came from them.

There is a decent chance that 2019 may be the year in which we see, at least in the US and Britain, decisive moments of disenchantment with the reactionary hopes of 2016. But it will then be all the more vital that this disenchantment is not allowed to curdle into something even more toxic.

Disillusionment must be met, not with more illusions that there is a sustainable reality to which we can simply return, but with the sober hope for a better future that is the only guarantor that we do not repeat the past.

1 Connell losing touch with club championship is real tragedy of Normal People
2 Normal People Class of 2020: The nine college friends in the series
3 We need to pay very close attention to what is happening in Britain now
4 George Floyd: police forcefully crack down on widespread protests
5 Remaking Ireland: Five positives from the pandemic
Real news has value SUBSCRIBE