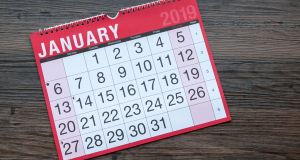 Even if you have no interest in English football, you will probably be aware that something called the “January transfer window” is now open. This liberating concept extends to most big European leagues, now mid-season, and means that clubs are free to move players in and out for the rest of the month, culminating with frenzied TV coverage of the last hours before the window closes again.

January has a similar effect on life in general. The Monday just gone – the first working one of a new year – is traditionally the busiest day of all for divorce lawyers, and the start of a month in which their trade is brisker than in any of the other 11.

Parallels with the English soccer season are obvious. For many marriages, the stress of the crowded Christmas fixture-list brings painful clarity about weaknesses in the line-up. By January, partners may know exactly who needs to be shipped out, if not who’s coming in to replace them.

On a less drastic level, the new year is also the time when people feel the need to get rid of bad habits, or acquire good ones. As with football clubs, we do this in the hope – however unrealistic – of greater success in life, or of just staying “up” and avoiding relegation. As with football teams too, the temptation is to overstretch: mortgaging our future selves to unhappiness at current inadequacy.

Historically, January had more to do with doors than windows. The name comes from Janus, the two-faced Roman god, who could look backwards and forwards simultaneously and was guardian of entries and exits. The humble janitor, now usually a general caretaker in public buildings, is an etymological descendant.

Speaking of Rome, my personal (and imaginary) janitor has just ushered the Italian language onto our premises for 2019. I don’t normally got in for resolutions, but for months past I’ve been meaning to try out that Duolingo phone app, which has supposedly revolutionised language-learning.

For best effect, the experiment had to involve a language I’d never studied before. So Japanese was briefly tempting, based on a vision in which my future self attends the World Rugby Cup final in Tokyo in November and chats fluently with the hosts about Ireland’s thrilling win.

But being slightly more realistic, I opted instead for Plan B, which foresees me ordering a cappuccino in the Piazza Navona before the Six Nations game next month while passing myself off as a local. Achieving the sartorial elegance required may be the biggest challenge.

A plan I do usually follow through on during Christmas holidays is catching up with books I’ve long meant to read, for self-improvement or otherwise. Top of my list this year was an 80-year-old classic: Stephen Rynne’s Green Fields, the diary of a gentleman farmer in 1930s Kildare.

By “gentleman farmer”, I don’t mean that Rynne didn’t work hard. He did, and at a range of things that would strain most modern farmers.

On his mixed holding near Prosperous, he raised sheep, cattle, poultry, barley, wheat, vegetables, strawberries, a bewildering range of apple trees, and made his own butter.

But he was a poet and philosopher too, and especially at this time of year, depended on books to get him through the long pre-electrified nights. He was single when writing, although pondering marriage. Interestingly, for the week that’s in it, he thought he might “like to be married in the winter, if I could be a bachelor in the summer”. But when he did subsequently acquire a wife, the arrangement was full-time.

A patriot, proud of the Free State’s independence, Rynne nevertheless had English heroes, chief among them William Cobbett: the farmer, journalist, and reforming politician of a century earlier.

Rynne would have liked to recruit Cobbett retrospectively for Ireland’s cause. “Could we but have exchanged prisoners of war in the long struggle between the two nations, how gladly we would have swapped Thomas Moore for [him], aye and thrown Richard [Brinsley] Sheridan into the bargain,” he wrote.

Warming to this fantasy transfer window, he went on to suggest a more elaborate literary exchange, whereby Ireland acquired his beloved GK Chesterton, while off-loading James Joyce and Oliver St John Gogarty, among others.

I may not share all Rynne’s literary tastes, but this was an ideal time of year to read his book. In keeping with the theme, it may even have planted seeds. Who knows, 2019 might also be the year I start growing things. With the optimism of the season, I don’t just mean ear hair.

1 Coronavirus: Non-essential travel from US set to be banned within days
2 ‘Our hearts are broken’ – implications of fresh lockdown sink in
3 Are we really facing the death of the office?
4 Coronavirus: No additional deaths in State but 68 new cases
5 Meath creche awaits test results after two cases of Covid-19
Real news has value SUBSCRIBE