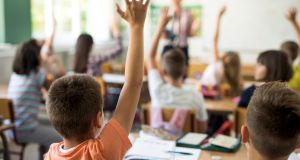 Kids who are comfortably polylingual are much more at ease with Irish than those who live in a monolingual English world. Photograph: iStock

It can be hard, when people running for public office come out with nonsense about immigrants and asylum seekers, to decide which is worse – that they genuinely believe it or that know it is false but peddle it anyway. Those who use anti-immigrant rhetoric depend on an opposition between “the people on the ground” who know how terrible everything is and the do-gooding “elites” full of airy-fairy liberal notions.

1 Political focus shifts as Government desperately tries to avoid new lockdown
2 Fears grow over restrictions in cities as Donegal and all colleges enter Level 3
3 Brendan Gleeson as Donald Trump: ‘A mediocre impression and possibly a great performance’
4 Traffic chaos as ‘singing and dancing’ woman stops car in middle of motorway
5 Covid-19 outbreak confirmed at Regional Hospital Mullingar
6 Dermot and Dave’s Dermot Whelan's mindfulness exposed as sly act of self promotion
7 Two turnkey homes for sale on same street as owners leave Dublin
8 Covid-19: Ireland faces ‘critical two weeks’ in fight against virus, Minister says
9 Trump to nominate Amy Coney Barrett to Supreme Court, CNN reports
10 Ireland faces devastating blow due to our failure to develop ferry services to Europe
11 Brexit: British law-breaking plan shocking but not unexpected
12 Why there is some good news in the latest Covid-19 data
13 Rush for Baptisms, Communions, Mass before Donegal enters Level 3
14 EPA calls for nationwide ban on smoky fuels in open fires and stoves
15 All third level colleges moved to Level 3, most tuition moved online
16 Greystones locals pay tribute as well-known shopkeeper is laid to rest
17 Dr Martin Feeley: Young and healthy majority need to be allowed to live
18 Coronavirus: 326 more cases reported with 152 in Dublin, 22 in Donegal
19 Dr Anthony Fauci tells Late Late Show he and Trump get on well despite Covid-19 tensions
20 Michael O’Leary is the boss you want to lead an airline out of crisis
21 Private hospitals expand services to deal with post-State takeover surge
22 How Finland kept Covid-19 in check and protected its economy
23 Only someone who wouldn’t miss €50 a week would cut the PUP
24 What is the going rate for a home in...Co Kerry?
25 More than 50 patients contracted Covid-19 while hospitalised in two months
26 People asked not to cross Border as Donegal prepares for Level 3 restrictions
27 UCD professor asked to resign from EU committee over Covid-19 claims
28 Mother refused meaningful access to teenage daughter in ‘profoundly sad’ case
29 Estée Lauder staff at Dublin airport plan further strike action
30 Aer Lingus staff say they are living in ‘near poverty’ and unable to cover rent
31 The pandemic has split us into two distinct camps: The Couples vs The Singles
32 Third attempt begins to fill chief State pathologist role
33 Five lessons I learned preparing my house for sale
34 Why are men still explaining things to women?
35 Millennial burnout: ‘The first generation predicted to go backwards in terms of life expectancy’
36 Prospect of a contested US election outcome in 2020 is very real
37 Legislation to impose strict carbon-emission limits to be in place by Christmas
38 Irish haulier to be sentenced in UK for drug smuggling, money laundering
39 Jennifer O’Connell: Where are the good men in sexual harassment tales?
40 Boy (15) injured in apparent racist attack in Dublin park
Real news has value SUBSCRIBE