Direct provision is based on the lie that even if the experience is miserable, it will be short 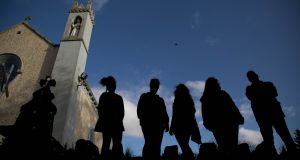 A Syrian family living in direct provision. Six months in limbo is fine – if you’re warm and safe and fed, you can put up with it. But this was always a lie. Ireland never had a system for processing applications for asylum fairly within six months. Photograph: Keith Heneghan/Phocus

In 1992, the concept of limbo – a place for the souls of infants who died before they could be baptised and who therefore merited neither heaven nor hell – was dropped from the Catholic catechism.

Eight years later the concept was given new life in Ireland. It was renamed “direct provision”, a system for housing and maintaining asylum seekers while their applications for refugee status are processed. People who were neither one thing nor the other – neither outside nor inside the Irish community – would be dispersed into centres round the country. (There are currently 38 centres in 18 counties, most of them owned and run as private, for-profit businesses.)

They would share cramped bedrooms and be fed communally and often badly. They would be given an allowance of €19.10 each week per adult and €9.60 per child to deal with all their other needs. (The rates were frozen until very recently – they are now €38.80 per adult and €29.80 per child.)

This system is now the subject of local protests, not by people who are confined within it, but by locals objecting to the creation of direct provision centres in their towns or villages. We can spend a long time debating the motives behind those protests, whether they are driven by far-right xenophobia or, as many of the groups involved claim, by disgust at the direct provision system itself. But even if the motives for the protests are decidedly mixed, this may finally be the moment to accept that the system is cruel and indefensible.

The original sin of direct provision is dishonesty – dishonesty about why it exists and how it was supposed to work. It exists, officially, to fulfil Ireland’s legal obligations (freely entered into by the State in 1956) to protect people fleeing from persecution and the threat of violence. But in reality it exists to deter people from seeking asylum in Ireland. Before 1999, people coming here to ask for asylum could, if they were destitute, ask for help under the ordinary social welfare system. The State decided that this possibility was acting as a magnet drawing people here to claim benefits. The real purpose of the direct provision therefore was, and is, to be sufficiently miserable to dissuade people from wanting to come to Ireland.

But the other great deceit was that even if people were pretty miserable, they would not be in limbo very long. Direct provision was admittedly a form of human warehousing, but it would be made bearable by its short duration. The Department of Justice’s working group (chaired by Judge Bryan McMahon) noted in 2015: “When direct provision was introduced in 2000 it was envisaged that protection applicants would live in direct provision accommodation centres on a short-term basis of not more than six months while their applications were being processed.”

But just as the system condemns children and adults to mere existence, the system itself merely exists

Six months in limbo is fine – if you’re warm and safe and fed, you can put up with it. But this was always a lie. Ireland never had a system for processing applications for asylum fairly within six months. At the time of the McMahon report, 55 per cent of people in the asylum system and 41 per cent of those in direct provision centres had been waiting for five years or more. This, in and of itself, makes the system both deceitful and inhumane. It is based on an assumption that everyone has always known to be false: this experience will be unpleasant but it will be over soon.

Bad as this is for adults, who waste away and lose their skills and self-reliance, it is unconscionable for children. Nobody responsible for creating the system ever claimed that a direct provision centre is an acceptable place for a child to grow up in – for the obvious reason that it is not. It is a grotesque irony that, in the same era that Ireland was confronting its appalling history of the institutional abuse of children, it was establishing a new system of abusive institutionalisation for children. Their needs for a normal family life, for safety and for a sense of belonging are routinely denied.

But just as the system condemns children and adults to mere existence, the system itself merely exists. It was never thought through or justified or seriously argued for. Nobody in authority has ever said that this is a proper or decent way to treat human beings. They don’t have to because the whole thing is based on a fiction: these are not places where people live, merely places where they are being kept for a few months while waiting for the State’s decision. This is Ireland’s waiting room – but a room that currently contains 4,490 adults and 1,883 children.

But all of this stays out of sight and out of mind until someone decides to protest against asylum seekers being housed in their town. We then see what is happening outside the places they might be kept (the banners, the placards, the angry locals). We do not see inside the places they are actually being kept. We do not protest against the corrosive dishonesty underlying this public policy or against the unjustified consignment of real lives to limbo. It is long since time we did.